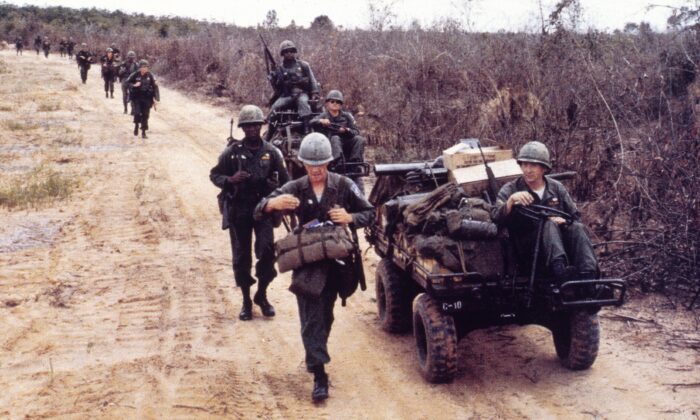 American troops move into position near Bien Hoa, Vietnam, in May 1965. (MPI/Getty Images)
US News

After War, the Journey Home Takes a Lifetime

Sailor Lawrence Markworth was eager to jump in the whaleboat to help search for a downed American pilot in the ocean near Vietnam in 1964. The war was in full swing.

“We spotted a helmet bobbing in the water, and it looked like he was alive. We were all excited: ‘We’re going to rescue a pilot. This is so cool,'” he recalled.

“We get up to him … but he was dead. I remember everybody hoisting him aboard, and the ship was just silent. It was … I don’t know, these things are still difficult to talk about.”

The pilot’s death brought back the death of his father, for which he blamed himself. A week before his deployment, Markworth had performed CPR on his father at home. His father didn’t survive, and Markworth carried his grief and self-blame into his deployment. He returned stateside two years later at age 20 with wartime trauma piled on.

“We’re not taught how to resolve these issues in this country. So the journey home is a lifetime,” Markworth told The Epoch Times on Nov. 7.

Markworth enlisted in the Navy in November 1962 at age 18 and served on the USS Castor as an electrician’s mate for two years, based out of Japan.

Now 77, he has spent decades battling addictions and his deeper wounds of moral injury and feeling betrayed by his country. He also battled the Veterans Administration (VA) for years over his exposure to Agent Orange and the illnesses he subsequently developed.

“It’s more difficult to return than sometimes it is to go to war,” he said. “The day I got out of the military, I was so happy. And yet, I didn’t realize that it was going to be some of the darkest times of my life.”

Psychotherapist Ed Tick, who has worked with veterans for 45 years, said the VA’s treatment of veterans in the United States is “woefully inadequate and mostly dependent on medications—which the veterans don’t want.”

He has spent decades researching how different cultures help heal their returning warriors, including an 11-year apprenticeship with a Native American medicine man.

“Military service and warfare are such extraordinarily penetrating and transformational experiences that they do live in the veterans’ minds and hearts as about the most important and intense thing they ever experienced. So for the rest of us, well, the war’s over. But for them, no, it’s never over,” Tick said.

The homecoming for a veteran, then, is “a very serious, demanding moral, psychological, spiritual, cultural challenge.”

Vietnam veterans suffered especially harshly after returning from war because they were treated cruelly. Some were called “baby killers.” Others were spat on. On top of that, many were drafted into the war and went against their will.

“This is one reason there’s no PTSD in Vietnam, like there is here,” Tick said, referring to post-traumatic stress disorder.

“In Vietnam, they don’t blame the troops, and they don’t even blame Americans. The Vietnamese say, ‘You American veterans were also victims of the war. We are all brothers and sisters, because we survived the same hell.'”

Tick has taken veterans to Vietnam every year since 2000 (until the pandemic) on a pilgrimage that has provided them a profound healing experience, especially when it comes to the burdens of moral injury and betrayal.

Moral injury is defined as a wound to the soul caused by participation in events that violate one’s deeply held sense of right and wrong.

“Moral injury is at the heart of PTSD. It’s almost never the case that we find PTSD without moral injury,” Tick said.

“We really have to get our warriors in service and our veterans afterward to feel safe and secure so they can deeply explore their own conscience and their own value system and how they feel about what they did. And then give them opportunities for restoring and recovering those more esoteric moral dimensions of their being.”

Markworth went to college after leaving the Navy in August 1966 and took seven years to gain a bachelor’s degree.

“I really struggled because I didn’t know who I was and I’d lost part of my soul.” He said he went “full blown” into the anti-war movement in San Francisco to help resolve his anger and shame that he had served in Vietnam and that he was part of the problem.

“I became a radical. I was a hippie. I was a Marxist radical. It was another avenue to relieve my pain.”

He first sought help through a therapist in 1969 after telling his girlfriend at the time that he was planning his suicide. Markworth said it saved his life, and he’s been in and out of therapy since.

However, he said his trip to Vietnam in 2017 with Tick was “the most healing thing I’ve done in terms of my service.”

At first, he was apprehensive about going, thinking the Vietnamese people would tell him he’s not welcome and to go home.

“It was just the opposite. We’d walk down the street, and they would come up—and these veterans, some of them disabled, would shake our hands,” Markworth said.

“And then when we meet with them—people from the North Vietnamese Army, or the Viet Cong—they’d all say: ‘We were both doing what we thought was right. We’re warriors. And, you now are our friends.’

“They were just amazing. So accepting, forgiving. There were a lot of tears. And then they would tell war stories. And there were four Army guys and me, and these guys found out they were at the same place at the same time fighting the same battle, on different sides.”

6 Steps For a Warrior’s Return

Tick has developed a six-step pathway for healing as veterans return home, based on his research and experience from other cultures. He follows the steps during his retreats within the United States, as well as the trips overseas, and they’re described in full in his book “Warrior’s Return.” Tick also published a new book this month, “Coming Home In Viet Nam.”

The first step is isolation and tending, where the warrior is taken care of and can rest.

“It’s wrong to bring warriors right home and put them back right into their family in their community, because the war is still in them. The first task of the community or the tribe is to take the war out of the warrior,” Tick said.

The second step is called affirmation of destiny and requires the veteran to acknowledge what they did and what happened to them. “This is the reality I lived and this is what I have to carry forward,” he said.

The third step is an intense purification and cleansing stage. Tick said Native Americans use sweat lodges and vision quests, while the early Judeo-Christian tradition used fire and water to cleanse themselves and their weapons, and priests to help purify them. “And they were not allowed to go home until they had gone through that process,” Tick said.

The fourth step is storytelling, through talking, creative writing, painting, or any form of arts.

“The Japanese samurai gave us some of the greatest landscape painters and Haiku poets. The Celtic warrior tradition said you can’t have your sword unless you learn to play a drum or a fife or a pipe. You had to have an art form to balance the killing arts,” Tick said.

The fifth step is restitution, which includes forgiveness and atonement, and involves both the community and the warrior. The community has to share the burden of responsibility, he said.

“You acted in my name, I paid the bills, I sent you. You didn’t do this on your own. And it wasn’t your decision, you were doing it representing me and our country, and you thought you were protecting me. So I take responsibility for you. And for whatever you did, and I’ll carry it with you, and I’ll help you come home,” he said.

“And the warriors need to own what they did, and practice some form of atonement. Atonement is a step in action to put the world back together where we harmed it.”

On his trips to Vietnam, the veterans have helped to build schools and houses, helped Agent Orange victims, and given cash and gifts to families in areas where the veterans fought.

“Whenever we do this … 40 or 50 years of taking medications and VA therapy to heal PTSD and it hasn’t gone away. And these activities and two weeks in Vietnam, and our veterans turn into laughing, joyous, happy, smiling people and their PTSD disappears,” Tick said. “It doesn’t always work, but it usually does.”

The sixth and final step is initiation as a warrior, usually through a ceremony.

“Traditional cultures didn’t call somebody a warrior until they could carry the experience without traumatic breakdown. Because warriors are supposed to become community elders and leaders and teachers after service. So I don’t help my veterans become civilians,” Tick said.

“Again, I tell them, ‘You can’t, you won’t. You can live with civilians, you can serve in civilian society, as a teacher and an elder, but you’re always going to be a warrior.'”