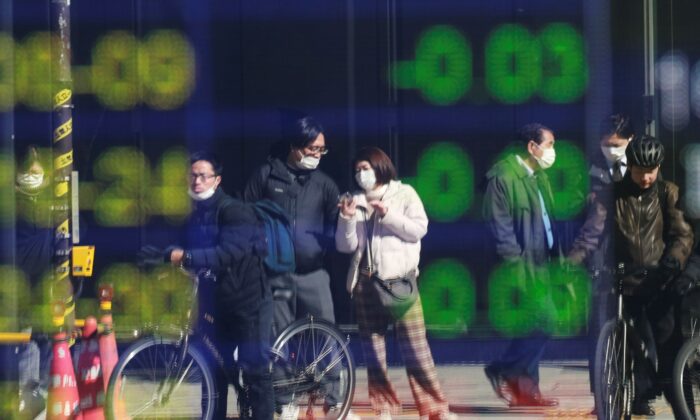 People are reflected on the electronic board of a securities firm in Tokyo, Japan, on Feb. 1, 2022. (Koji Sasahara/AP Photo)
Stocks

U.S. stock futures were mixed following a robust close on Monday, led by a 3.5 percent rise for the Nasdaq. That meant the tech-heavy index ended January on a strong note after narrowly avoiding an all-time worst start to a year.

The S&P 500 recorded its weakest January performance since 2009.

Fed policymakers appeared to confirm on Monday that interest rates would rise in March, but spoke cautiously about what might follow.

Australia’s central bank also weighed in on Tuesday. It ended its A$275 billion ($194.40 billion) bond-buying campaign as expected, but pushed back hard on market rate-hike bets.

World markets have been rattled by rate-hike expectations. Global equities in January saw their worst monthly performance since March 2020, at the height of the initial wave of the pandemic, Deutsche Bank research showed.

“The volatility of the stock market and bond yields is due to the lack of transparency and clarity from the Fed,” Eric Vanraes, a portfolio manager at Eric Sturdza Investments, said.

Although the Fed had shifted from the message that high inflation is transitory, he said it was at risk of falling behind the curve.

“They should be more aggressive short-term and less aggressive later,” Vanraes said.

The U.S. Institute for Supply Management’s activity index out later on Tuesday could provide some sense of whether price pressures are abating.

In Asia, a number of markets including China were closed for the Lunar New Year holidays.

Major bourses from London to Paris and Frankfurt were up as much as 1 percent with the biggest boost from Swiss lender UBS on strong fourth-quarter earnings.

“The equity market sell-off is overdone in our view, and we reiterate our call to buy the dip, particularly in cyclicals and small caps,” JPMorgan analysts said in a note.

Tensions between the West and Russia over Ukraine have also weighed on risk sentiment in recent weeks, although they lifted oil prices, pushing Brent futures roughly 17 percent higher so far this year.

Brent eased 0.7 percent on Tuesday to $88.63 a barrel, pushed down in part by speculation the OPEC+ group of oil producers could add more supply than previously expected at a meeting this week. U.S. West Texas Intermediate crude was also down 0.7 percent, trading at $87.55.

Money markets price in two 10 basis point rates hikes by the European Central Bank by year-end, with a chance of a third move.

That poses a potential headache for ECB policymakers meeting on Thursday since they had said rates are unlikely to rise in 2022.

In currency markets, the Australian dollar rebounded 0.3 percent after an initial hit from the Reserve Bank of Australia’s dovish message. It was last trading at $0.7085.

The dollar was generally weaker against other major currencies as the edge came off aggressive Fed rate hike bets. The euro was last up 0.23 percent at $1.1261, sterling was almost 0.4 percent firmer and the dollar was down 0.4 percent at 114.73 yen.

Russia’s rouble firmed to the 77 area versus the dollar, recovering further after a large-scale sell-off in January caused by increased tensions between Moscow and the West.