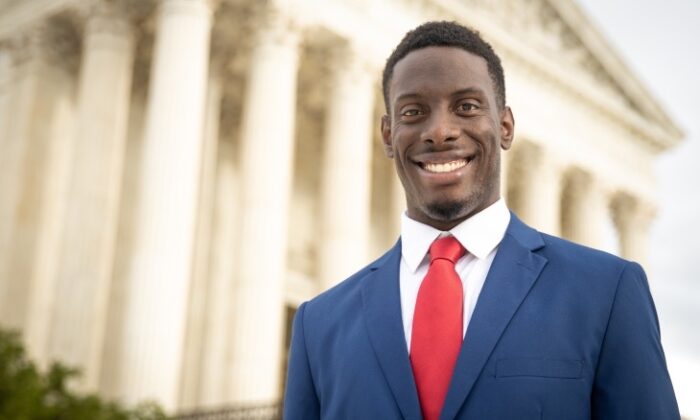 Two Christian former college students whose Supreme Court victory allowed them to pursue nominal damages after their right to share their faith on campus was infringed settled their lawsuit in exchange for a payment of more than $800,000 by the college.

As The Epoch Times previously reported, the case goes back to 2016 when Chike Uzuegbunam—then a student at Georgia Gwinnett College, a public college in Lawrenceville, Georgia—was on campus handing out religious literature and sharing his Christian beliefs. A college official stopped him, saying he was breaking school rules by not speaking within the boundaries of an approved “speech zone.”

Uzuegbunam was unaware he wasn’t standing inside one of the two tiny speech zones where students were allowed to express themselves on campus. To use the zones, students had to seek preclearance and submit any leaflets in advance, after which officials would decide on their application. To speak publicly outside the zones, students also had to first obtain a permit from the school.

Uzuegbunam obtained a permit and spoke publicly a second time, making a good-faith effort to follow rules, but someone complained to campus security after he began speaking and college officials accused him of “disorderly conduct.” Student Joseph Bradford also wanted to speak publicly, but the policy led him to back off. Both students are evangelical Christians who believe they have a duty to share their faith.

The college eventually changed its student speech policies after the students filed suit each seeking $1 in nominal damages to make the point that they had been wronged without seeking further damages. Nominal damages means a trivial sum to reflect the fact that a tort, or civil wrong, has been committed. After the lawsuit was initiated, the college changed its policy and allowed speech anywhere outdoors on campus.

This policy change, and the fact that the two students went on to graduate from the college, led a federal district court to dismiss the case, finding that the case was moot, meaning that any ruling would have no practical impact because there was no longer an actual dispute between the parties. The claim for nominal damages by itself “could not serve as a sufficient basis for the case to proceed.” The ruling was upheld by the U.S. Court of Appeals for the 11th Circuit.

They appealed to the Supreme Court, which, on March 8, 2021, ruled 8–1 in their favor (pdf), reversing the 11th Circuit and remanding the case “for further proceedings consistent with this opinion.”

“This case asks whether an award of nominal damages by itself can redress a past injury,” Justice Clarence Thomas wrote for the court. “We hold that it can.”

The sole dissenter, Chief Justice John Roberts, agreed with the district court, noting the two men were no longer students at the college, the restrictions were lifted, and the men “have not alleged actual damages.” The majority “sees no problem with turning judges into advice columnists” by “deciding cases ‘in the rarefied atmosphere of a debating society,’” Roberts wrote, quoting an earlier precedent.

The case returned to the U.S. District Court for the Northern District of Georgia. On Dec. 22, 2021, the judge ruled (pdf)—contrary to the wishes of the college—that for the college to pay out a total of just $2 for violating the former students’ constitutional right to communicate about their religious faith free from interference seemed unfair. The court found the students could seek damages if they desired a larger, more fitting payout.

But instead of continuing to litigate, Georgia Gwinnett College agreed to pay nominal damages and attorneys’ fees totaling more than $800,000, the students’ lawyers at the public interest law firm known as the Alliance Defending Freedom (ADF) announced. The parties filed a stipulated dismissal (pdf) with the court on June 22, formally ending the lawsuit.

“This settlement represents a victory not only for Chike and Joseph but also for many other students who wish to exercise their constitutionally protected freedoms on the campuses of Georgia’s public colleges and universities,” ADF Senior Counsel Travis Barham said in a statement.

“For five years, Georgia Gwinnett College officials have tried again and again to dodge accountability for their illegal actions in violating Chike’s and Joseph’s rights, even after the U.S. Supreme Court rebuked them.

“But after the district court put a stop to that, the college has finally decided to stop fighting the Constitution. This case should also remind other colleges and universities nationwide of the need to respect their students’ liberties. If they do not, they can and will be held accountable.”

The Epoch Times reached out repeatedly to Georgia Gwinnett College for comment but didn’t received a reply by press time.