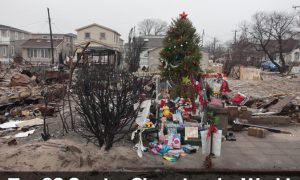 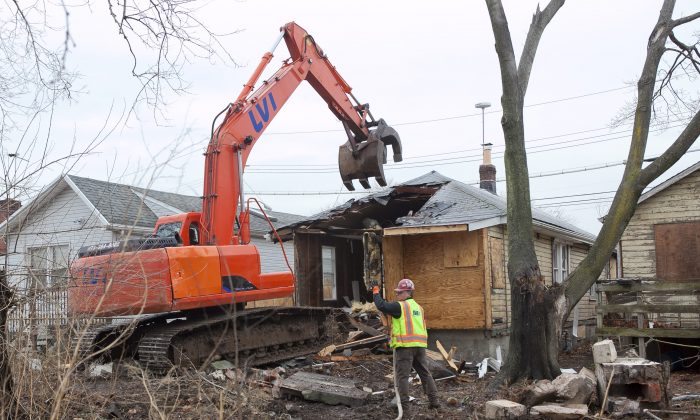 NEW YORK—Under gray skies last Thursday morning in Staten Island’s Oakwood Beach, the fifth home in this neighborhood to be demolished under the state’s buyout program gave way to the claws of an excavator.

First the garage was flattened. Next, the chimney of the house was ripped down and smashed. Then the back door and back wall of the one-story bungalow came off and the shingled roof was stacked atop the growing pile of wood and cement.

The home was once full of life, and its residents part of a community where people knew their neighbors. They walked their dogs and rode their horses on the nearby beach. They sat on their back porches in the morning with a cup of coffee and listened to the birds sing. All of that is rapidly becoming just a memory.

The demolitions in Oakwood Beach last week, one on Thursday and one on Friday, are the unofficial start of a process of returning the area to nature under a buyout program funded by the U.S. Department of Housing and Urban Development and administered by the state’s Community Development Block Grant Disaster Recovery.

Superstorm Sandy’s havoc brought three deaths and 6 feet of storm surge and flooding to the Staten Island neighborhood. Some homes were lifted clean off their foundations and deposited in nearby marshland.

Like other hard-hit areas of New York City, residents started rebuilding, and tried to move on with life. But in early 2013, some realized they could appeal to the state to buy their homes so that they could afford to live somewhere else.

In order to qualify for a buyout a majority of the 319 homeowners in the area needed to be in agreement. Eventually, even those who were resistant went along with the plan. To date, there are only nine homeowners who haven’t taken part.

“It was never the intention for us to include the entire neighborhood,” said Joe Tirone Jr., the head of the Oakwood Beach Buyout Committee, of the process that he helped organize. “The government … recognized the need.”

But signing on to the plan seemed to make sense.

Now listed in the 100-year floodplain, Oakwood Beach faces the threat of massive flood insurance premium rate hikes that could go up to $20,000 per year within the next two years, too much for most middle-class households. And there is always the very real possibility of being flooded again.

Oakwood Beach sits at just 5 feet above sea level, and is situated in a bowl-like natural setting without sufficient natural or man-made drainage systems.

The governor agreed to buy the homes at pre-storm market value so the land could be returned to its natural setting of marshland and tall grasses. It was reasoned that future property losses would be averted, and the reclaimed land would act as a natural buffer against flooding.

“Those homes shouldn’t be there in the first place,” said Salvatore Parello, owner of the small house at 88 Foxbeach Ave. that was demolished last Thursday. He was not on site to see it go, but was reached by phone.

Representatives from the governor’s Office of Storm Recovery (OSR) estimate the cost of buying out the 310 homeowners will be at least $100 million.

The amount that each homeowner is paid varies according to the pre-storm value of the home. The average price paid for the homes is about $400,000, while one of the largest offers for a buyout was just over $710,000.

Parello said he was happy with what the state paid him, but would not disclose a specific dollar amount.

“It was the right thing to do,” he said.

As of Jan. 19, 98 residents have sold their homes to the state, and 122 have signed contracts but not yet closed on the sales. Thirty-eight homeowners have been made offers, but have yet to sign contracts.

The state estimates that in the weeks ahead, they will see an average of 10 closings a week. As soon as a deal is closed, the formal permitting and inspection process leading to demolition begins.

To Stay or Go

The governor’s office has faced questions over prospects for the few homeowners who decide to stay in the neighborhood. Barbara Brancaccio, a spokeswoman for the OSR, admits it was a tough decision for residents, but that they approached the state and not the other way around.

“The important thing to note is that it was their decision,” said Brancaccio at the demolition site last Thursday. “The people here came to the governor in nearly 100 percent consensus and essentially said, ‘We all want to leave.’”

As the buyout is voluntary, residents who stay will not be subjected to eminent domain and will still have regular city services. There will just be vastly fewer homes.

“There are other options—if people want to stay, they can stay,” said Brancaccio. “Some people might like having more space [around them].”

Not all residents are in agreement, or as clear about leaving, though. Some would rather not go anywhere.

“It’s a gamble either way,” said one homeowner, who asked not to be identified because she is among the 258 owners who have received offers from the state, but have not closed on a deal.

“From day one, a third of us didn’t want it,” the homeowner said.

As the neighborhood empties out, it is increasingly clear that people who do choose to stay might see the value of their homes drop. It might also be difficult to sell a home in an area overrun with idle land. The community is virtually gone.

“It’s horrible,” said the homeowner, “When you look at the whole picture, there’s no way to stay.”

These days, Oakwood Beach is beginning to resemble a ghost town.

The impact of the overall scene makes the few occupied homes with potted plants, front porch lights, and cars parked out front seem out of place.

For Parello and the 98 other homeowners who have already closed on sales with the state, the days of living in fear of flooding and rebuilding are over. As homes are taken down and debris is hauled away, the ground will be cultivated and seeds for native grass and plants will go in.

Chris Hutchins, a project manager with the state’s NY Rising Community Reconstruction Program in the governor’s office, said at the site of the demolition Thursday that the work happens quickly. Just across the street there was recently a house, and now there is just dirt.

“You’d never know a house was there,” said Hutchins.

Representatives from the governor’s OSR said there are at least six demolitions scheduled for the week of Jan. 20, and demolitions on the remaining homes purchased by the state will proceed quickly.