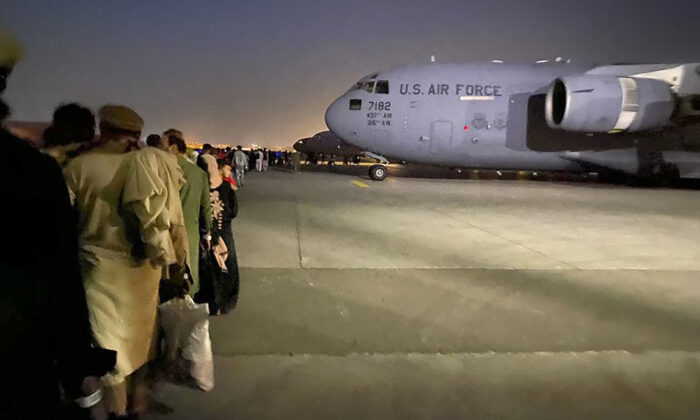 Afghan people queue up and board a U.S. military aircraft to leave Afghanistan, at the military airport in Kabul on Aug. 19, 2021. (Shakib Rahmani/AFP via Getty Images)
Viewpoints

In the “Nicomachean Ethics,” Aristotle has a lot to say about the activity of choice and its place in securing “eudaimonia,” that “good-spiritedness” that is synonymous with human fulfillment.

Choice is critical in the metabolism of virtue. But, Aristotle points out, it is possible for someone, through bad choices, to put himself in a situation from which choice cannot rescue him.

I suspect this hard truth pertains to states or societies as well as to individuals.

We the people can make choices that put our fate beyond reclamation by choice.

Recent events in Afghanistan, and what they portend for the United States, provide an example of what I mean.

No one’s crystal ball is bright enough to say in any detail what those implications are.

But already it is clear that the choices we have made have put us beyond reach of many choices we assumed we might make.

Consider, for example, the several calls for Joe Biden to resign or be impeached.

The Left is counting on the bad memory, impatience, or perhaps the frivolous nature of the body politic to push beyond this episode and resume the “normality” of open borders, skyrocketing inflation, and stupefying debt.

Will not such bread and circuses obliterate the distressing images of people falling off airplanes or crowds beaten and trampled outside the Kabul airport?

Maybe. For a while.

But the new normal is not normal. The other day, the great Mark Levin interviewed Colonel Richard Kemp, a British former commander in Afghanistan.

I appreciate the sentiment.

But think about the line of succession.

First up in the event of a President’s death, incapacity, or removal is the Vice-President.

For us, that would be Kamala Harris.

Let us draw a veil and move on to the next in the line of succession, the Speaker of the House: Nancy Pelosi.

Moving on, we have the President pro tem of the Senate, Patrick Leahy, followed by the Secretary of State, Anthony Blinken.

And so on through the Attorney General and the rest of the Cabinet.

We chose, or at least we acceded to the installation of, Joe Biden as president.

It is worth noting that Joe Biden is not the “fons et origo” of our situation.

What is happening now has been developing for some time.

Afghanistan was just the revelatory moment, like the light switched on at midnight in a tenement apartment.

You suddenly see the roaches in their hundreds scurrying to hide.

They were there feeding and defecating before the light went on. The light just revealed what the darkness concealed.

In “Thoughts on the Cause of the Present Discontents,” Edmund Burke, writing about the court of George III, noted with pointed understatement that “It was soon discovered that the forms of a free, and the ends of an arbitrary Government, were things not altogether incompatible.”

It is a phenomenon that we conjure with to this day.

We have elections. We have institutions whose prerogatives are supposedly limited by law.

But to what extent does the American Republic circa 2021 live up to the ideals of limited government envisioned by the Founders?

I think that America has made choices that have put it into a state of existential peril.

I am not, to be frank, sure what the best course of action is.

One is that the status quo is unsustainable.

The unspoken compact of the elites to usurp the prerogatives of government is in a shambles. It cannot be repaired.

Which brings me to the second thing, brilliantly articulated by Giuseppe Tomasi di Lampedusa in his novel “The Leopard.”

“If we want things to stay the same,” a young character says, “a lot of things are going to have to change.”

A look at the world today suggests that this is a paradox we neglect at our peril.