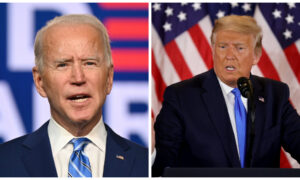 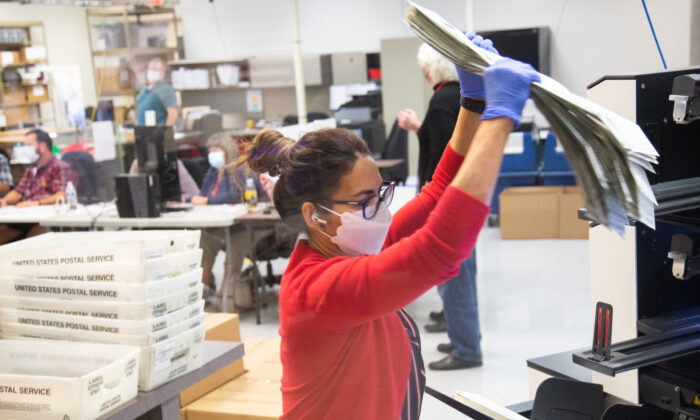 PHOENIX—With the counting of ballots nearing completion in Arizona, U.S. officials and voters on the ground are feeling optimistic the state will eventually turn red this election.

It’s been more than a week since election night. President Donald Trump is now within 1 percent of Democratic presidential nominee Joe Biden, according to the latest unofficial results. Trump has 1,633,896 (49.02 percent) votes, while Biden has 1,648,642 votes (49.47 percent), according to data from Decision Desk HQ. As of Nov. 10, more than 60,000 votes remain to be counted.

“We have a 55 percent chance of winning Arizona—based on the data,” an administration official involved with campaign operations told The Epoch Times.

“From a purely mathematical standpoint, there is a clear path to victory for Trump [overall],” said the official, who requested anonymity because he isn’t authorized to speak to the media.

In Arizona, an automatic recount will take place if the final margin is one-tenth of 1 percent, according to state law. As more ballots were counted, Biden’s initial lead shrunk significantly. Trump’s campaign early on predicted that the president would win the state and its 11 Electoral College votes.

In the past week, thousands of Arizonians have converged at different hotspots across downtown Phoenix. Rallies have taken place outside the Maricopa County Elections Department, and there was a peaceful gathering outside the state’s capitol building this weekend.

Voters are concerned about a lack of transparency and what they see as a fraudulent and corrupt election process. Some in the government have similar sentiments.

“We will continue this election fight until we believe this is legal,” the official said on Nov. 9. “Trump will never concede.”

“If the electors vote for Joe Biden, that’s one thing—but why … would we listen to MSNBC, CNN calling it?”

According to the administration official, around 80 percent of Republicans in Washington are supportive of the ongoing election battles, but 20 percent privately feel it’s time to throw in the towel. He noted that the same voices telling Trump to concede never told George W. Bush to concede during the disputed election against Al Gore in 2000.

Biden declared victory in the presidential race on Nov. 7—a declaration disputed by Trump. The Epoch Times will not declare a winner of the election until all results are certified and any legal challenges are resolved.

The long wait for the ballot counts—which Arizona’s governor said occurred in part due to state officials’ efforts to make it harder to cheat—have pushed many Arizonians to lose faith in the integrity of the election process and how ballots are counted.

The Associated Press, Fox News, and others called Arizona for Biden in the early stages of the counting process, further causing frustration among some voters. In the 17 presidential elections between 1952 and 2016, only one Democratic candidate has won Arizona—Bill Clinton in 1996.

The Trump campaign has filed a lawsuit in the state over alleged rejected votes in Maricopa County, the largest county in Arizona. The campaign stated that some in-person votes were disregarded because of improper guidance from poll workers.

Arizonians like Steven Carroll, who attended a rally outside the state’s capitol on Nov. 7, are hopeful any legal battles make it to the Supreme Court.

“There’s things going on all across the United States where we see there’s problems going on, and the mainstream media doesn’t want to look at it,” Carroll told The Epoch Times. “We will see how it plays out.”

Meanwhile, Attorney General William Barr has authorized federal prosecutors across the country to “pursue substantial allegations” of voting irregularities, according to a leaked memo.

“I think the left doesn’t understand that this will go all the way to SCOTUS. The Supreme Court is more powerful than them,” the official said. “It is going to be a rude awakening.”

The Epoch Times spoke to dozens of voters over the past week, many of whom felt disheartened and frustrated by this year’s drawn-out election process.

Some questioned why Arizona couldn’t get its results out on election night as Florida had.

“When a system seems to be as flawed as it is across the country, you can’t question that every state has been flawed or tainted in some respects,” Brian Curtis said outside the Maricopa County Election Department on Nov. 6.

Stacy Gentile, who was also outside the election department, said the energy and enthusiasm on the ground doesn’t match up with the vote tally of Biden being in the lead.

One voter from Phoenix, Jeremy Fryar, said he remains optimistic that “all this cheating will come to the light.”

“My mom always told me good always triumphs over evil,” he said.