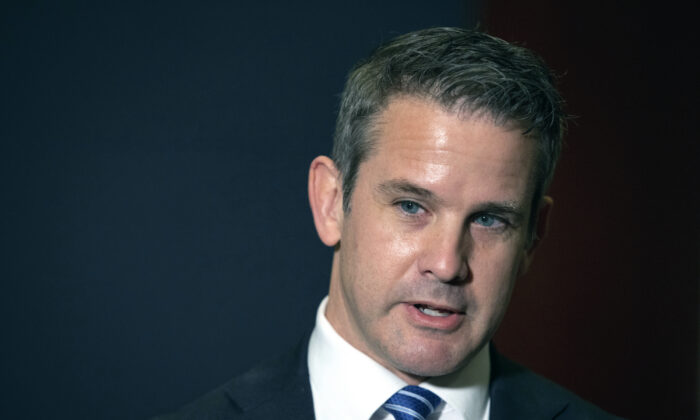 Rep. Adam Kinzinger (R-Ill.) speaks to the press after Rep. Liz Cheney (R-Wyo.) was ousted from her leadership role in the House Republican Conference at U.S. Capitol in Washington, on May 12, 2021. (Amanda Andrade-Rhoades/AP Photo)
By Joseph Lord

The move comes after the formal end of the 117th Congress, in which Kinzinger served. Early in the Congress, Kinzinger announced that he would not be seeking reelection.

“Kinzinger joins CNN with extensive experience in GOP politics, having recently retired from the U.S. House of Representatives after serving six terms representing Illinois’ Sixteenth Congressional District,” the press release continued. “Kinzinger most recently served on the high-profile House Select Committee to Investigate the January 6th Attack on the United States Capitol as well as the House Committee on Energy and Commerce and the House Foreign Affairs Committee.”

“Happy to join the team @CNN!” Kinzinger said in a Jan. 4 tweet after the news was announced.

Kinzinger was best known during the 117th Congress for his role on the Jan. 6 panel, where he served under Ranking Member Liz Cheney (R-Wyo.), who lost her seat in the 2022 GOP primary. Kinzinger and Cheney, both outspoken critics of President Donald Trump, were the only Republicans on the committee.

In February 2022, the Republican National Committee censured Kinzinger, in addition to Cheney, for their roles on the committee, cutting them off from the fundraising and electioneering of the party.

“The primary mission of the Republican Party is to elect Republicans who support the United States Constitution and share our values,” the RNC resolution said. “The Conference must not be sabotaged by Representatives Liz Cheney and Adam Kinzinger who have demonstrated, with actions and words, that they support Democrat efforts to destroy President [Donald] Trump more than they support winning back a Republican majority in 2022.”

While on the Jan. 6 Committee, Kinzinger backed the panel’s narrative of events on Jan. 6, which claimed that the breakdown of order at the Jan. 6, 2021 “Stop the Steal” rally was the result of an intentional effort by Trump and his allies to overthrow the United States government. Kinzinger has long repeated claims that suggest that the Capitol breach was an “insurrection.”

During the 116th Congress, Kinzinger was one of a handful of Republicans, including others like Cheney, who voted to impeach Trump in the wake of the rally.

On Jan. 5, Kinzinger made his first appearance as CNN’s newest contributor, appearing on the outlet’s “Morning Hour” show.

Though Republicans are in the majority, the process to choose a speaker—which must be done before the House can move on to any other business—has been contentious.

The broad majority of Republicans have thrown their backing behind McCarthy, who is hoping to finally clinch his years-long goal of taking the speaker’s gavel. However, a coalition of 21 Republicans, many of them members of the House Freedom Caucus, have blocked McCarthy’s election to the top House post, saying that McCarthy is not the man for the hour.

“All the Freedom Caucus—I call them ‘the Freedom Club’—is trying to do right now is to extract as much as they can from Kevin McCarthy,” Kinzinger said.

“It’s all a game to them and unfortunately there’s real consequences,” he added. “There’s got to be a point at which they have an internal discussion and say ‘Is this really what we wanna be?'”

There has been speculation that his colleague Cheney, who has suggested she is probing for a 2024 presidential run, may also join a media outlet as a contributor, but Cheney has not made any such announcement.