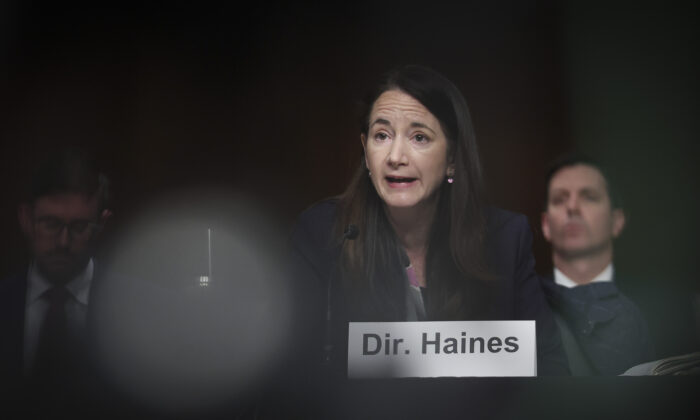 ‘Acute’ Threat of Chinese Invasion of Taiwan ‘Between Now and 2030’: US Intelligence Chief

The Chinese Communist Party (CCP) is rapidly developing the military capabilities required to launch an invasion of Taiwan, which doesn’t yet have sufficient training and forces to repel such an attack, the Senate Armed Services Committee was told during a May 10 hearing on worldwide threats.

“China has focused on studying the United States’ way of war and on offsetting our advantages,” committee Chair Sen. Jack Reed (D-R.I.) said. “Beijing has made concerning progress in this regard and holds its own expansive geostrategic ambitions.”

Reed said the CCP is actively weighing its options for invading Taiwan and closely scrutinizing the Russian invasion of Ukraine to inform its own strategy.

While the CCP claims Taiwan is a breakaway province, Taiwan has been self-governed since 1949 and has never been controlled by the CCP. Nevertheless, CCP leader Xi Jinping has vowed to unite Taiwan with the mainland, and has refused to rule out the use of force in achieving that.

The war that would erupt in the event of such a conflict could draw the United States in, as the nation depends on Taiwan for innumerable products and services, including semiconductors, which are vital to technologies ranging from commercial vehicles to missiles.

The United States officially maintains a stance of so-called strategic ambiguity, in which it neither confirms nor denies whether it would militarily defend Taiwan from invasion. Since the Taiwan Relations Act of 1979, however, the United States has maintained an obligation to ensure that Taiwan has the military capabilities necessary to defend itself from aggression.

Director of National Intelligence Avril Haines testified that China was engaged in a “coordinated whole-of-government approach” to coerce other powers in the region to accept its claims to Taiwan, and was paving the way for its coerced unification with the mainland in this decade. To that end, she said, China’s communist regime was the United States’ “unparalleled priority.”

Sen. Josh Hawley (R-Mo.) asked Haines whether the threat of a Chinese invasion of Taiwan was “acute between now and 2030.”

The director responded: “It’s fair to say that it is critical, or acute, between now and 2030. I think that that’s absolutely fair.”

Haines added that the lessons learned from Ukraine by both China and Taiwan could affect that timeline for better or worse. As such, the United States would need to work closely with allies and partners throughout the Indo-Pacific to deter an invasion.

Additionally, Haines said the CCP is expanding its power across military, diplomatic, and economic spheres, and is now actively challenging U.S. dominance in most arenas throughout the world.

“[China] is coming ever closer to being a peer competitor in areas of relevance to national security, is pushing to revise global norms and institutions to its advantage, and is challenging the United States in multiple arenas economically, militarily, and technologically,” she said.

Regardless of its global ambitions, the CCP would prefer not to risk a war that could result in the decimation of its own forces through a protracted fight, said Lt. Gen. Scott Berrier, director of the Defense Intelligence Agency. Instead, the regime would likely continue its attempts to isolate Taiwan in order to coerce it into unification through fear and intimidation.

As such, Berrier said that Taiwan’s military is learning from the Ukrainians’ fight against its Russian invaders, and the successes it has been able to build with a relatively modest, but supremely spirited, fighting force.

“There are some things that we can do with Taiwan,” Berrier said. “I think they’re learning some very interesting things from the Ukrainian conflict like how important leadership is, how important small unit tactics are, how important an NCO [non-commissioned officers] corps is.”

Still, he cautioned that Taiwan isn’t yet capable of repelling or deterring a CCP invasion, and questioned whether its forces would match the will for battle that the Ukrainians have thus far displayed.

“They have a largely conscript force,” Berrier said of the Taiwanese military. “I don’t believe it is where it should be.

“I think Taiwan could do more.”

But, with the right weapon systems and better training, Berrier said, Taiwan could have a fighting chance.

To that end, he said, the United States could help Taiwan to better understand where its defense dollars could be best spent to ensure its continued de facto independence and democratic way of life. To achieve that, it’s necessary to understand precisely how broad-ranging the CCP’s potential strategies are for seizing Taiwan.

“China has a range of military options to coerce Taiwan, including increasing military presence operations, an air and maritime blockade, seizure of Taiwan’s smaller outlying islands, and a full-scale amphibious invasion of Taiwan itself,” Berrier said in a prepared statement.

“Beijing appears willing to defer the use of military force as long as it considers that unification with Taiwan can be negotiated and that the costs of conflict outweigh the benefit.”

Perhaps most importantly, he said, China and Russia would continue to grow their militaries and develop new capabilities with the goal of displacing the United States for so long as they perceived the nation to be a declining power.

“Both China and Russia perceive that the United States is a nation in decline and use that view as a pretext for advancing their authoritarian models and executing their global ambitions,” Berrier said.

The United States will need to work tirelessly to curb the growth of those global ambitions and to ensure the continued self-determination of Taiwan, according to the committee’s ranking Republican member, Sen. Jim Inhofe (R-Okla.)

“The Chinese threat is beyond anything we’ve ever dealt with before,” Inhofe said.