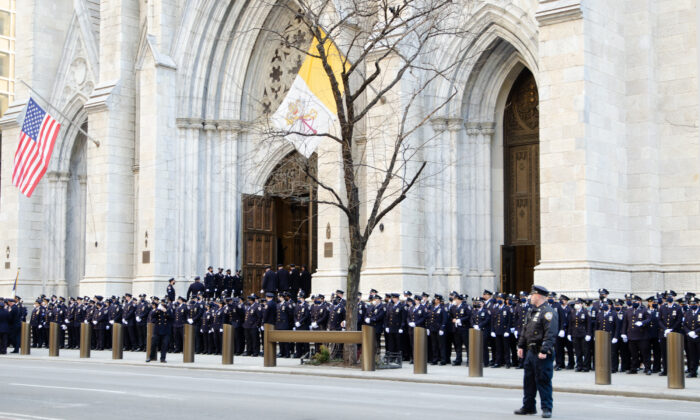 A New York City actress was fired from her job after she posted a video complaining about street closures during the funeral of slain NYPD officer Jason Rivera, said her former employer.

In a now-deleted video, actress Jacqueline Guzman was allegedly seen criticizing the NYPD for the massive funeral by claiming they are blocking streets.

“We do not need to shut down most of Lower Manhattan because one cop died for probably doing his job incorrectly. They kill people who are under 22 every single day for no good reason and we don’t shut down the city for them,” Guzman appeared to say on TikTok as she was walking down an empty street, according to the New York Post.

The woman then added, “What if somebody is having a heart attack in this area. Nobody can get to them because it’s all blocked off for one [expletive] cop.”

Guzman’s employer, Face to Face Films, confirmed that the woman in the video was Guzman and said that it terminated her employment.

“Face to Face Films has just been made aware of an insensitive video involving one of our members, Jacqueline Guzman. Face to Face Films does not support nor can condone these comments made about fallen Officer Rivera. As a result, she is no longer a member of our company,” Face to Face Films confirmed on its Facebook page over the weekend.

On Face to Face’s website, a now-deleted page said that Guzman is a Cuban-American actress based in New York City, originally from Florida. Anthony Laura, the founder of Face to Face, told the New York Post that Guzman was a film and theater actress.

And the woman’s now-viral comment drew the ire of a top NYPD union official, Pat Lynch, who issued a statement.

“New Yorkers turned out by the thousands yesterday to help us honor our fallen brother. One person spreading hate cannot erase that. This kind of garbage has polluted the conversation for far too long,” Lynch said in a statement in an apparent reference to leftist rhetoric against police officers. “We need the New Yorkers who are standing with us to speak up and push back.”

Although Guzman appeared to have deleted the video from her social media, it was saved and later re-uploaded elsewhere online. Her TikTok account was also made private.

Rivera, who was 22, had only been a police officer for about a year when he and his NYPD partner, Wilbert Mora, were ambushed by a gunman in Harlem earlier in January. Lashawn McNeil, 47, allegedly shot and killed both Rivera and Mora following a 911 call over a family dispute, officials said.

“My name is Jacqueline Michelle Guzman. I am a 25-year-old gymnastics coach and a business owner,” the Long Island woman said in a video. “This video is to clarify that I am not the Jacqueline Guzman in that video—that awful video. I have been receiving multiple calls and messages and many threats.”

She added: “Please stop targeting me and attacking me. I personally cannot handle it.”

In another social media post, Guzman and her sister added: “Please note that we have been mistakenly & maliciously tagged in a hateful post … to be clear that is not either of us, nor are we affiliated with that post. We support all law enforcement in our community. We do not align with her messaging, we find it despicable.”