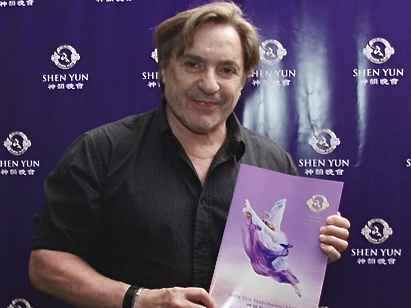 “I’m still enjoying it,” he said. “I think from an artistic level each scene has wonderful discipline, with each story having this very important depth through the gestures, the body language [of the dancers], that is really admirable.”

New York-based Shen Yun has three companies that tour the world each year, with a mission to revive 5,000 years of traditional Chinese culture, according to its website. The Shen Yun Performing Arts International Company is visiting Buenos Aires.

“It’s amazing. The truth is, to have all this enormous history behind each one of the works is touching. It is really watching a very rich experience, very rich culturally,” Mr. Grimau said.

Mr. Grimau said he would recommend the performance to his family and friends.

“It has that very important ability to touch you,” said Mr. Grimau. To him, one of the reasons Shen Yun is touching is a quality of clarity and simplicity in the performance. At the same time, he found “in the best sense of the word, an enormous depth.”

According to the Shen Yun website, “For thousands of years, Chinese artists cultivated virtue, believing that to create true art worthy of the heavens, there must first be inner purity. Today, Shen Yun’s artists follow this noble tradition. The result is a performance of consummate beauty, purity, and goodness.”

As an artist, Mr. Grimau responded to subtleties in the performance, which he called sublime. He said the meaning conveyed by the dancers and musicians is “a sensitive, delicate message, that moves you and makes you want keep watching … .”

Buenos Aires is the only South American city that will host New York-based Shen Yun this season. The company will be there through December 21.

With reporting by NTD Television and Sarah Matheson