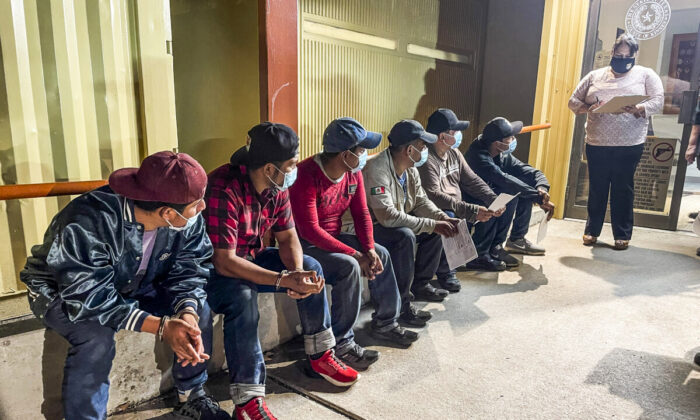 Dozens of immigration activists allegedly walked out of a virtual meeting with Biden administration officials on Oct. 16 in protest over the White House’s plan to restart the Trump-era “Remain in Mexico” program, Politico reported.

The advocates read a statement accusing the administration of “playing politics with human lives” ahead of a virtual meeting with multiple officials, including people from the Department of Homeland Security (DHS) and the White House Domestic Policy Council’s Esther Olavarria.

Activists allegedly said they could no longer “come into these conversations in good conscience.”

“We have sadly reached a turning point,” they said before most of them exited the video meeting, Politico reported.

“I cannot stand one more meeting of them pretending,” Ariana Saludares, an advocate from the New Mexico-based Colores United, ​told Politico. “They give us accolades on the outside, but on the inside, we’re having to take out the metaphoric knives from our back.”

Top immigration enforcement officials in President Joe Biden’s administration said on Oct. 14 that they’re prepared to restart the border policies enacted during the Trump administration in November, provided that Mexico agrees to cooperate.

The Biden administration has made “substantial progress” toward the reimplementation of the program, formally known as the Migration Protection Protocols (MPP), government lawyers told a U.S. judge in Texas. The DHS has been holding talks with Mexico, finalizing the operational plans required to reimplement MPP, preparing immigration courts, and issuing the contacts required to build hearing facilities near the border, they said.

“DHS anticipates being in a position to reimplement MPP by mid-November—dependent on decisions made by Mexico,” the filing reads.

The program centers around making asylum seekers wait in Mexico while their claims are heard in the United States.

Mexico said in an Oct. 14 statement that it has been in communication with the U.S. government over immigration but didn’t specifically mention the MPP.

The “Remain In Mexico” program was launched in January 2019 under the Trump administration and was widely credited by proponents for a decline in illegal border crossings.

Mark Morgan, who was acting commissioner of Customs and Border Protection at the time, told The Epoch Times that the MPP was ​​”the most significant game-changer” and was largely responsible for a 75 percent drop in such crossings.

However, opponents of the policy, including Democrat leaders, have argued that the immigration system needs to be completely overhauled and have denounced the MPP as “inhumane” and “dangerous” to illegal aliens, who they claim would be at a higher risk of exploitation by cartels and criminal organizations in Mexico.

MPP was swiftly suspended by Biden on his first day in office in January, along with several other Trump-era immigration policies.

Illegal immigration has significantly increased under Biden, topping 200,000 apprehensions at the southern border in both July and August. Numbers for September still haven’t been released.

Although the DHS issued a memo ending the program in June, a Texas-based federal judge ruled that the MPP must be restarted and placed an injunction that required the department to work in “good faith to restart MPP.” The DHS appealed that injunction, but was blocked by the Supreme Court in August.

In September, the DHS stated that it intended to issue a new memo scrapping the immigration program, despite the Supreme Court ruling that it was to be reinstated.

The DHS stated that it would continue in the meantime working in good faith to restart MPP in compliance with the Texas judge’s order and that it’s engaged in ongoing diplomatic talks with Mexico.

The department noted that it’s committed to building a “safe, orderly, and humane immigration system that upholds our laws and values,” stating that it will continue to process immigrants in accordance with U.S. law.

A White House official told Politico that “the Biden Administration has been very clear that MPP is not an immigration policy we agree with or support.”

“That’s why the Department of Homeland Security immediately appealed the court injunction once it was ordered,” the official said.

“We are incredibly thankful and appreciative of the work immigration advocates and organizations do around the clock to improve our immigration system.”

The Oct. 16 virtual walkout comes amid increasing tensions between activists and the Biden administration, with activists telling Politico that they believe some White House officials view border issues as a doomed issue for Democrats.

“I think they’re afraid of the backlash of anti-immigrant groups, and we’ll continue to remind them that that backlash will exist regardless of what they do,” Luis Guerra, the strategic capacity officer at the Catholic Legal Immigration Network who walked out of the Oct. 16 meeting, told Politico.

“We don’t actually believe they’re doing everything in their power to actually restore asylum at the border, the way that they say that they’re trying to.”