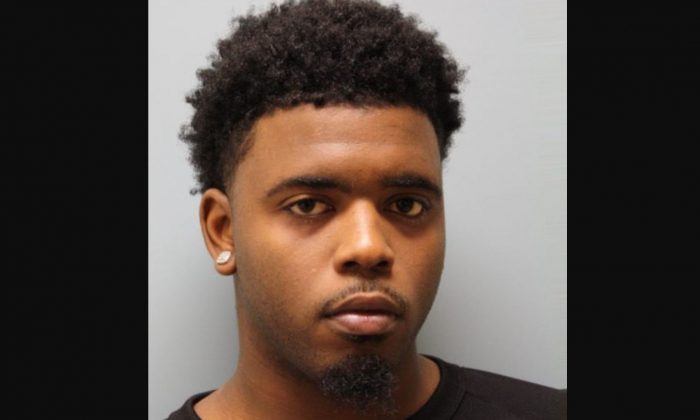 Eric Black Jr., 20, was arrested and charged with capital murder after admitting to shooting Jazmine Barnes, 7, in the outskirts of Houston, Texas on Dec. 3, 2018, officials said. (Harris County Sheriff's Office)
Crime and Incidents

Activists in Houston and around the nation pushed a theory that the shooting of a 7-year-old girl was racially motivated until two black men were arrested for allegedly committing the crime.

The theory stemmed from a description of the suspect as a white male.

A sketch of the suspect was released in early January depicting a thin Caucasian man with light colored eyes. Activists claimed, without evidence, that the perpetrator shot the young girl because of racial animus.

Civil rights activist Shaun King was among those pushing the narrative. He even posted a picture of a man who was arrested in Houston recently, saying he believed that man could be the killer. A photo of the man shows a convincing resemblance to the sketch. King has not apologized for identifying the wrong person by name or broadcasting a picture of the man to his over-one-million followers on Twitter.

The family of Barnes and the local chapter of Black Lives Matter also claimed the shooting was driven by racism, a claim echoed by officials without evidence, including U.S. Rep. Sheila Jackson Lee (D-Texas) during a rally on Saturday. A number of outlets (one example) circulated the news by claiming as fact that a white male suspect killed Barnes.

Eric Black Jr., 20, and Larry Woodruffe, 24, who are both black, were arrested for the alleged shooting of Barnes. Black admitted to the shooting, which was reportedly a case of the men firing at the wrong car, believing it was another vehicle.

Officials said the description of a white male suspect was based on recollections by two of Barnes’s sisters.

“We do not believe in any way that the family, as we’ve said from the beginning, that they’ve been involved in anything nefarious,” Harris County Sheriff Ed Gonzalez said at a press conference, reported the Houston Chronicle.

“[It] just went down very quickly. The gunfire erupted. We’re talking about small children. They witnessed something very traumatic. It’s likely the last thing they did see was indeed that truck and the driver in that truck.”

Gonzalez said the man in the truck was “most likely just a witness, by sight or sound, to what actually transpired.”

Unlike activists and family members, Gonzalez did not attribute a motive to the white male suspect they were looking for.

But King and Gonzalez both pushed the description of a white male suspect even after they received a tip that led to the arrest of Black Jr., reported the Daily Caller. Gonzalez later said that a tip delivered to King and forwarded to authorities helped officials identify Black Jr. and Woodruffe.

Black Jr. appeared in court on Jan. 6 and was remanded without bail. Prosecutors said during the court appearance that Woodruffe was partially identified as the second suspect.

They believe that Black Jr. was driving a rental car while Woodruffe pulled the trigger during the drive-by shooting near a Harris County Walmart.

In the press release announcing the arrest, the Harris County Sheriff’s Office said that Black Jr. was charged with capital murder for the Dec. 30 shooting.

“I am grateful to our dedicated investigators, the partner law enforcement agencies that provided vital assistance, and tipsters from across the nation who pulled together to support our work to get justice for Jazmine,” Gonzalez said in a statement. “Our work is not finished, but I believe the people of Harris County can take comfort in knowing we have made great progress.”

Houston Mayor Sylvester Turner was among those lauding the work of law enforcement in the arrest.

“I want to thank the Harris County Sheriff’s Office and all law enforcement for their diligent work to identify and arrest a suspect in Jazmine Barnes’ senseless murder,” Turner said in a statement.

“The authorities worked around the clock to find the individual who is allegedly responsible for the heinous and unspeakable act of violence against an innocent child. This should serve as a warning to all violent offenders who prey on our community: The color of your skin, how much money you make—these things don’t matter when law enforcement will find you, eventually.”