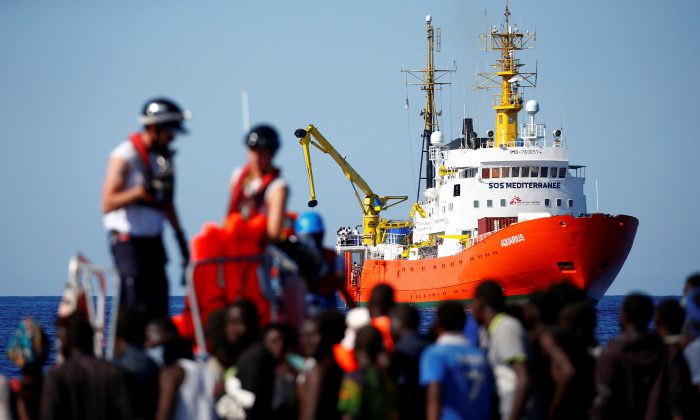 The MV Aquarius rescue ship is seen as migrants on are rescued by the SOS Mediterranee organization during a search and rescue operation in the Mediterranean Sea, off the Libyan Coast, Sept. 14, 2017. (Reuters/Tony Gentile/File Photo)
Europe

Activists Protest as Italy Prepares to Ship Migrants to Spain

ROME—Italy plans to transfer migrants crammed aboard a charity boat onto other vessels on Tuesday, June 12, and then sail them all to Spain, despite appeals from humanitarian groups to let the group disembark immediately.

Some 629 migrants, including 11 children and seven pregnant women, have been drifting in the central Mediterranean aboard the Aquarius rescue ship since Sunday, when both Italy and Malta shut their ports to the vessel.

Spain unexpectedly offered on Monday to take in the migrants, who were picked up off Libya’s coast over the weekend, but the Aquarius had still not moved more than 16 hours later, as Italian authorities work out the logistics of the trip.

Doctors Without Borders, which is operating the Aquarius alongside SOS Mediterranne, said Italy wanted to shift at least some of the migrants onto other vessels and then head together in a convoy towards the Spanish port of Valencia.

It added: “The better option would be to disembark the rescued people in the nearest port after which they can be transferred to Spain or other safe countries for further care and legal processing.”

But Italy’s new anti-establishment government, looking to put pressure on the European Union to re-write its immigration rules, showed no signs of relenting despite warnings of an approaching storm bringing waves of over 2 meters (6.5 ft).

“This morning we will send ships and boats to take them to Spain,” Transport Minister Danilo Toninelli told Radio Capital, adding that Italy had already sent fresh provisions to the Aquarius ahead of the voyage which could take three days.

Even as Italy worked to dispatch the charity ship, an Italian coast guard vessel with 937 migrants aboard was heading north from the Libyan coast and was expected to dock in Sicily on Wednesday.

“No one should dare brand Italy or its government as inhumane or xenophobic,” said Toninelli.

However, charities questioned why the coast guard boat was being allowed to dock in Italy, while migrants on the Aquarius, who had been at sea for longer, were not.

“Why do 629 people on Aquarius still have to suffer? NGOs do nothing differently to the coast guard,” the charity Sea Watch wrote on Twitter. “All a political stunt … at the expense of people in distress?”

Italy has taken in more than 640,000 mainly African migrants over the past five years. Efforts by Rome to persuade other EU states to accept some of the newcomers and share the cost of their care has largely fallen on deaf ears, heightening both anti-European and anti-migrant sentiment in the Italy.

The right wing League scored its best-ever result in March national elections and has formed a coalition government with the anti-system 5-Star Movement.

League leader Matteo Salvini was sworn in as interior minister earlier this month and has vowed to clamp down on illegal immigration and change EU rules.

“To politely raise one’s voice pays off,” Salvini said on Monday. “It’s something Italy hasn’t done for many years.”