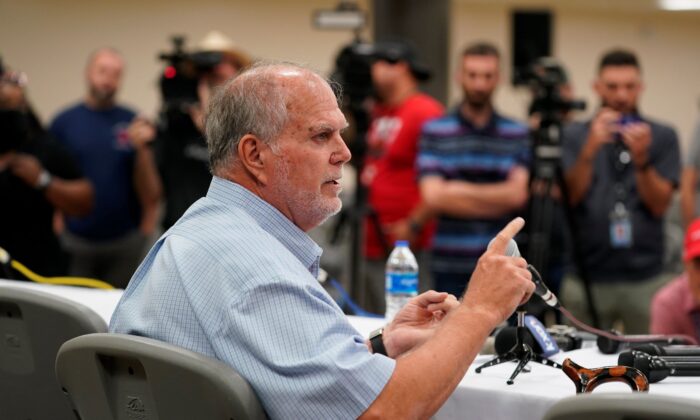 Uvalde Mayor Don McLaughlin speaks to the media following a news conference where the Texas House investigative committee released its full report on the shooting at Robb Elementary School in Uvalde, Texas, on July 17, 2022. (Eric Gay/AP Photo)
By Katabella Roberts

The lieutenant who was the acting police chief on duty the day of the mass shooting at Robb Elementary School in Uvalde, Texas, has been placed on administrative leave, following a report that found systemic failures by law enforcement who responded to the incident.

Uvalde Mayor Don McLaughlin confirmed in a statement published on July 17 that Lt. Mariano Pargas had been placed on leave. McLaughlin noted that the city has a responsibility to evaluate how the Uvalde Police Department responded to the shooting incident, including Pargas’s role as acting chief.

“This administrative leave is to investigate whether Lt. Pargas was responsible for taking command on May 24th, what specific actions Lt. Pargas took to establish that command, and whether it was even feasible, given all the agencies involved and other possible policy violations,” McLaughlin wrote in the statement.

The statement didn’t provide details as to whether Pargas was placed on paid or unpaid leave.

The announcement came just hours after the Texas state House of Representatives on July 17 published a 77-page report noting that there were failures across the board by some of the roughly 400 law enforcement officers who responded to the May 24 mass shooting, including Pargas.

“There is no one to whom we can attribute malice or ill motives. Instead, we found systemic failures and egregious poor decision making,” the report said.

It also pointed to “shortcomings and failures of the Uvalde Consolidated Independent School District [CISD] and of various agencies and officers of law enforcement” and “an overall lackadaisical approach.”

Pargas told the committee that “he figured” CISD police Chief Pete Arredondo had jurisdiction over the incident and that he “must have been coordinating the law enforcement response—and that the Uvalde Police were there to assist,” the report states.

The committee, in its report, also determined that Arredondo, who was one of the first responders on the scene, “failed to perform or to transfer to another person the role of incident commander” on the day of the shooting, which left 19 students and two teachers dead.

“This was an essential duty he had assigned to himself in the plan mentioned above, yet it was not effectively performed by anyone,” the report states. “The void of leadership could have contributed to the loss of life as injured victims waited over an hour for help, and the attacker continued to sporadically fire his weapon.”

Arredondo was placed on leave in June following growing criticism over his failure not to immediately breach the classroom where gunman Salvador Ramos was fatally shooting students at the Texas school.

The committee wrote in its report that law enforcement failed to quickly confront Ramos on the day of the shooting, which saw law enforcement officers take more than 75 minutes to neutralize the shooter after he entered the building.

In June, Arredondo told The Texas Tribune that a missing key to a locked classroom door was the reason law enforcement officers took more than 70 minutes to take down Ramos.

“The only thing that was important to me at this time was to save as many teachers and children as possible,” he said.

But in its report, the committee noted that “in this crisis, no responder seized the initiative to establish an incident command post.”

“Despite an obvious atmosphere of chaos, the ranking officers of other responding agencies did not approach the Uvalde CISD chief of police or anyone else perceived to be in command to point out the lack of and need for a command post, or to offer that specific assistance,” the report states.

“Given the information known about victims who survived through the time of the breach and who later died on the way to the hospital, it is plausible that some victims could have survived if they had not had to wait 73 additional minutes for rescue.”

Texas Department of Public Safety Director Steven McCraw also told a state Senate hearing in June that police officers wasted time that day searching for the classroom door key without ever testing to see if the door was locked. According to the report, “none of the Border Patrol agents who used a key and ultimately opened the door were wearing body cameras which might have shed additional light on this question” of whether the door was actually locked.

“There is reason to question whether the door was actually locked,” the report reads (pdf).

In his statement published on July 17, McLaughlin said he agreed with the committee’s review of the mass shooting incident and its finding that there was a “failure of command,” but said the city has further questions regarding that day, such as who was responsible for taking command and what specific actions were taken by each agency on the day.

The Uvalde mayor’s office didn’t respond by press time to a request by The Epoch Times for additional comment.