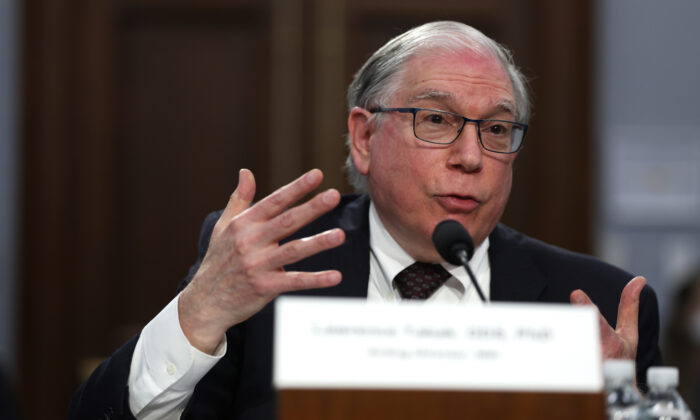 Acting Director of National Institutes of Health Lawrence Tabak testifies during a hearing before the Labor, Health and Human Services, Education, and Related Agencies of House Appropriations Committee at Rayburn House Office Building on Capitol Hill May 11, 2022. (Alex Wong/Getty Images)
By Mark Tapscott

Undisclosed royalty payments estimated at $350 million from pharmaceutical and other firms to Dr. Anthony Fauci and hundreds of National Institutes of Health (NIH) scientists do present “an appearance of a conflict of interest,” according to the agency’s acting director.

Dr. Lawrence Tabak, who took over as NIH director following the December 2021 resignation of the agency’s long-time leader, Dr. Francis Collins, told a House Appropriations Committee subcommittee that federal law allows the royalty payments, but he conceded that they don’t look ethical.

“Right now, I think the NIH has a credibility problem and this only feeds into this, and I’m only just learning about this,” Rep. John Moolenaar (R-Mich.) told Tabak. “People in my district say, ‘Well, so-and-so has a financial interest,’ or they don’t like ivermectin because they aren’t benefitting from that royalty.

“You may have very sound scientific reasons for recommending a medicine or not, but the idea that people get a financial benefit from certain research that’s been done and grants that were awarded, that is, to me, the height of the appearance of a conflict of interest.”

“We support the science that validates whether an invention is or is not efficacious, we don’t say this is good or this is bad. … I certainly can understand that it might seem as a conflict of interest,” he said.

Moolenaar seemed taken aback by Tabak’s response and, while pointing to Fauci, who was also testifying, said that “truthfully, I would say you’ve had leaders of NIH saying certain medicines are not good.”

Tabak said such statements by NIH are based on clinical trials that are supported by the agency.

Moolenaar then asked Tabak, “But if the agency is awarding who is the beneficiary of the grant, who is doing the trial, and there is somehow finances involved, that there is a financial benefit that could be accrued if someone’s patent or invention is considered validated, do you not see that as a conflict or at least the appearance of a conflict of interest?”

After conceding that there’s an appearance of a conflict of interest, Tabak suggested to Moolenaar that “maybe this is the sort of thing that we can work together on so that we can explain to you the firewalls that we do have because they are substantial and significant.”

Moolenaar’s reference to Fauci was in regard to him telling The Associated Press in a 2005 article that first brought the NIH royalties issues into the headlines that he had donated his royalties to charity.

But the issue faded from the headlines after 2005, and it’s only now getting renewed attention as a result of revelations first reported on May 9 by The Epoch Times that documents obtained in a Freedom of Information Act lawsuit brought by a nonprofit government watchdog show an estimated $350 million in undisclosed royalty payments from pharmaceutical and other private firms to top NIH executives, as well as to hundreds of the agency’s health scientists and researchers.

The $350 million in royalty payments were made between 2010 and 2020, according to Open the Books, the nonprofit that took the NIH to court when it refused to acknowledge the group’s FOIA request for documents.

Adam Andrzejewski, founder and president of Open the Books, told The Epoch Times on May 11 that NIH continues to withhold important information about the royalty payments, including the names of particular payers and the specific amounts paid to individuals at NIH.

“With tens of billions of dollars in grant-making at NIH and tens of millions of royalty dollars from third-party payers flowing back into the agency each year, NIH needs to come clean with the American people and open the books. We need to be able to follow the money,” Andrzejewski said.

“We believe transparency will revolutionize U.S. public policy. There is no better example of this than the third-party (think pharmaceutical companies) payments to NIH scientists. Every single outside payment to a government scientist could be a conflict of interest.”

The Moolenaar–Tabak exchange took place during a hearing on the Biden administration’s 2023 budget request.

Rep. Neal Dunn (R-Fla.), who’s also a surgeon, told The Epoch Times that “it’s no secret that the agency needs reform. Their many issues were exacerbated and highlighted by the COVID-19 pandemic. Providing the public with transparent access to how the NIH is spending taxpayer dollars and reaching their decisions is a basic responsibility, and they must be held accountable. Now more than ever, we must commit to reforming our federal health agencies and restoring America’s trust in public health.”