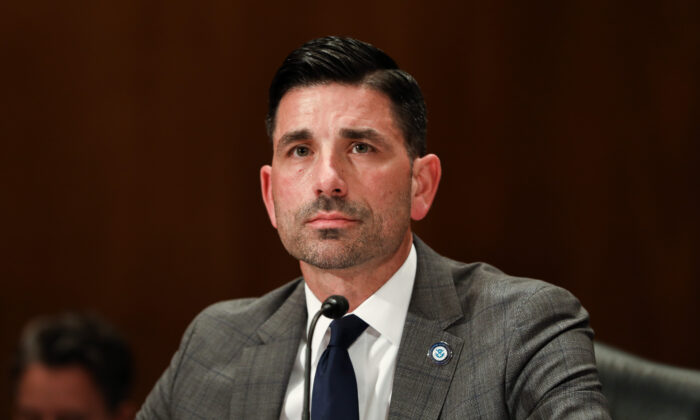 Acting DHS Secretary: Struggle With China ‘Nothing Short of a Civilizational Conflict’

Acting Secretary of the Department of Homeland Security (DHS) Chad Wolf affirmed the intelligence agency’s assessment of the Chinese Communist Party’s (CCP) threat to the United States in his speech Sunday when he warned that the CCP’s goal is to upend the American way of life.

“China threatens the livelihood, prosperity, and well-being of each and every American. Your homes, your schools, your jobs, your retirement accounts, and your health are all at risk. Our struggle with China is nothing short of a civilizational conflict,” Wolf said at a virtual event hosted by The Heritage Foundation in Washington.

“Our founders had a powerful vision for this nation. To be a bastion of freedom, a shining ‘city upon a hill,’ and a beacon of hope to those suffering across the world—including those fleeing oppressive, authoritarian regimes,” Wolf continued.

Wolf told listeners that the CCP fundamentally opposes free and open economic and democratic societies and views the United States as “a political and ideological threat. It wants to reshape the world in its image: centrally-planned and authoritarian.”

Director of National Intelligence (DNI) John Ratcliffe Wrote in a December Op-ed, “The intelligence is clear: Beijing intends to dominate the U.S. and the rest of the planet economically, militarily, and technologically.”

Wolf warned that through disinformation and propaganda the CCP seeks to destroy the United States from within. Wolf said it would be difficult to detail each and every way the CCP attacks the United States, but listed some of the key strategies used by the CCP.

“China attacks the legitimacy of our political system,” Wolf said. “Each day, Chinese operatives engage in disinformation campaigns designed to mislead the American public, pressure political figures, shape U.S. discourse in China’s favor, and shift responsibility for the deadly COVID-19 pandemic to others.”

He said the CCP uses cultural and commercial ties to influence all levels of U.S. government and push pro-CCP policies. Wolf also stressed that the CCP uses cyberattacks to undermine the U.S. economy and infrastructure.

“China’s cyber capabilities should alarm all Americans,” Wolf said. “A cyber-attack on our critical infrastructure could be catastrophic.”

“China is a top threat to U.S. supply chain security and a persistent source of counterfeit goods,” Wolf added, listing medicines, cosmetics, auto parts, and most recently, Personal Protective Equipment used during the pandemic, as some of the items the CCP produces to get an economic advantage.

Meanwhile, Christopher Wray, director of the Federal Bureau of Investigation (FBI) warned in July that Beijing’s counterintelligence and economic espionage operations are the “greatest long-term threat” to the United States’ economic and national security.

In a November statement, Wray said: “The Chinese Communist Party’s theft of sensitive information and technology isn’t a rumor or a baseless accusation. It’s very real, and it’s part of a coordinated campaign by the Chinese government.”

He added that “the FBI opens a new China-related counterintelligence case nearly every 10 hours.”

Wolf outlined President Donald Trump’s “whole-of-government” response to the CCP threat and the tightening of U.S. policies toward the Chinese regime in order to stop the attacks on America.

Wolf concluded his remarks by revealing that his department will soon be releasing a strategic plan for countering the Chinese regime, “an innovative document built from President Trump’s 2017 National Security Strategy and the 2020 U.S. Strategic Approach to the People’s Republic of China.”

Cathy He contributed to this report