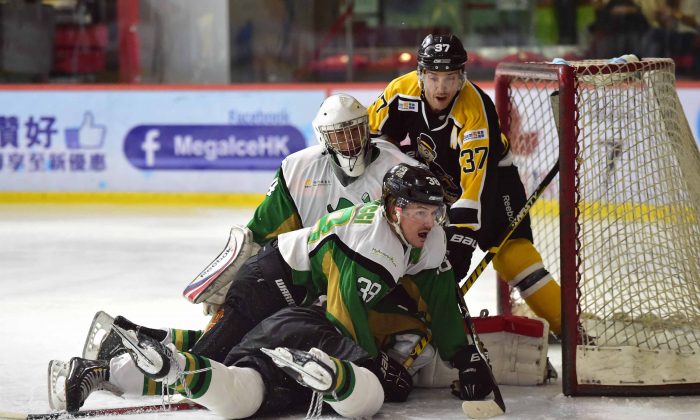 HONG KONG—Just as it looked like the Hong Kong Tycoons were beginning to dominate the League, Macau Aces put up an amazing display to hold them back and take the points. The game started with the familiar sight of Brad Smith and Kory Falite of Tycoons partnering to each score goals to put them 2-0 into the lead after 6 minutes.

But great play by the entire Aces squad allowed them to hit back and go into a 3-2 lead at the first break courtesy of goals by Michael Kwist and two by Jeff Ceccacci.

Jonathan Szychta, with assists by Falite, restored order for the Tycoons with two goals in the first 4 minutes of Period-2 to retake the lead at 3-2, but a Jouni Tormanen strike mid way through Session-2 leveled the score again and that is the way it stayed until the break.

The final session was very tight with great displays by goalies Cody Drumm (Tycoons) and Emerson Keung (Aces) to stop the constant attacks on their respective nets. Just as it was looking like overtime would be needed to separate the teams, Keith Tsang struck for the Aces with just 20 seconds left on the clock to give the important 2-points to the Aces and put them into a joint leadership position.

Warriors vs Sharks
With everyone taking a deep breath after the intense competition of the first match it was good that the Kowloon Warriors game against the South China Sharks started at a more sober pace. Having said that, Jordan So was quick off the mark to log the first goal for the Sharks after only 11 second he then scored a second goal right at the end of the first stanza, but in the meantime Gregory Smyth took advantage of Sharks’ Adaurdo Paz’s time in the sin-bin for ‘Boarding’ to slot in an equalizer mid way through the session.

Warriors hit back twice in the first 2 minutes of session-3 to give them a 5-4 lead and from then on wave after wave of attacks came hurtling in against Jason Awalt, the Warriors keeper. But Awalt and the Warriors defense held out and an end-to-end long-shot by Lawrence Nutting sealed the match 6-4 for the Warriors.

Standings
Hong Kong Tycoons and Macau Aces are both on 8-points, Kowloon Warriors are on 5-points and South China Sharks have 4-points.