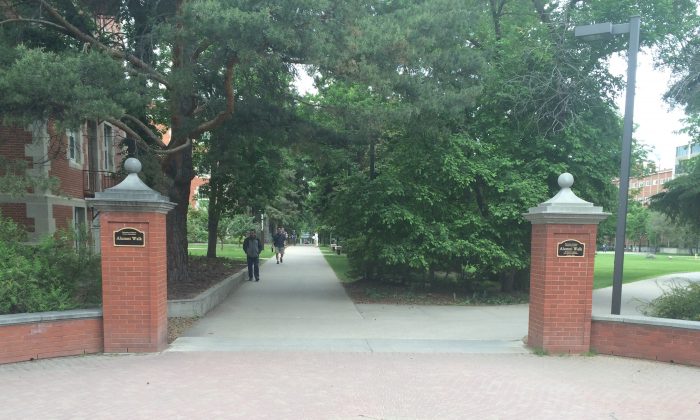 Students walk on the campus at the University of Alberta in Edmonton. A professor at Dalhousie University is calling attention to the high salaries earned by university administrators in Canada, while many institutions are undergoing cuts to services and staff. (Omid Ghoreishi/Epoch Times)
Canada

EDMONTON—After the job of president at the University of Alberta was advertised with a starting salary of $400,000, Kathleen Cawsey joked on Facebook with a fellow academic that they should jointly apply for the position and split the pay, making the point that they would both be better paid than they are currently.

A few other academic friends joined the conversation, and Cawsey, an associate professor of English at Dalhousie University, decided to get serious with the idea.

The joke then became a tongue-in-cheek campaign to apply in groups of four for the well-paid position. U of A’s current president is stepping down at the end of the month.

“I think we got 56 people who sent in applications in groups of four,” says Cawsey.

Applicants range from full professors to adjunct and sessional university lecturers, who typically receive low salaries, as well as unemployed academics. The campaign even attracted applicants from the United States, and as far away as the United Kingdom.

The point of the campaign, says Cawsey, is to demonstrate the disparity between what university administrators are paid compared to sessional and adjunct lecturers, and to contrast “what admins are paid and this rhetoric of austerity, saying how we have to cut programs and increase tuitions for students.”

In their application letter to the University of Alberta, Cawsey and her three co-applicants note that between the four of them, they have 12 post-secondary degrees, including four PhDs, putting them ahead of any other single applicant.

“We believe that our commitment to higher education is evident in our willingness to job-share and to each take only a fair and reasonable salary,” the application letter reads.

Cawsey doesn’t dispute that that the job of university president is a demanding one that comes with a lot of responsibility.

“The person should be paid more than an ordinary professor, and I don’t think we’re objecting to that,” she says.

Jack Quarter, a professor at the University of Toronto’s Ontario Institute for Studies in Education and a researcher in the field of non-profits, says universities are becoming increasingly like large corporations, being operated by multi-layer management within a bureaucratic structure.

“The administrators have high pay as do professors in business faculty and some others too,” Quarter said in an email.

He says there may be no simple answer as to what constitutes appropriate compensation for the job of president of a university, although “400k and 450k strike me as a lot.”

“The factors that appear to bear on pay are administrative role, faculty or department, years of service, and to some extent merit,” he says.

“Perhaps a ratio is needed of highest to lowest. If so, what groups should be included in the ratio (professional and service staff, for example?) and how much of a consideration should be years of service?”

Demanding or not, Cawsey says with a chuckle that she and her co-applicants are prepared to take the job if offered.

“I think that I have said that I would only take the job if the money that usually goes to perks … goes to hiring new tenured track jobs, and specifically for internal candidates who’ve already been doing those jobs for five years,” she says.

The deadline for the application was June 10. So far, Cawsey has not been contacted for an interview.

“We haven’t heard anything yet. I think I owe someone a beer if we do.”