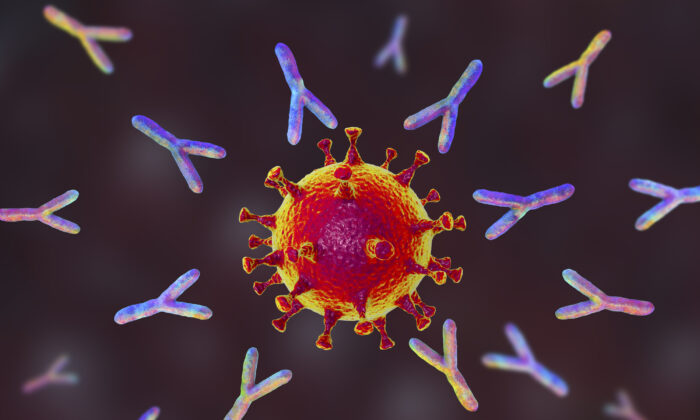 Illustration of antibodies (y-shaped) responding to an infection with the new coronavirus SARS-CoV-2. (Getty Images)
AMERICA

About half of the American population has already gone through the COVID-19 disease. In just the month of January, more than 30 million Americans were likely infected with the CCP (Chinese Communist Party) virus that causes COVID-19. The Centers for Disease Control and Prevention (CDC) estimated the figure based on serology tests conducted in commercial laboratories on samples from around the country. The presence of antibodies in the blood serum indicates a person has or has had the infection.

By the end of December, about a third of Americans were estimated to have gone through COVID-19. A month later, it was more than 43 percent. Since then, more than 5 million more infections have been detected. Because the antibody prevalence data indicates about two infections occur for each one detected, it may be that almost half the population has gone through COVID-19 already.

The CDC cautions that the serology tests could show both false negatives and false positives, thus affecting the accuracy of its survey.

The agency also warns that its survey “estimates the percentage of people that have detectable antibody indicating resolving or past infection with SARS-CoV-2, but not how much antibody is present.”

“Therefore, the estimates do not necessarily indicate the percentage of people with sufficient antibody to protect against reinfection,” it says.

This characterization doesn’t quite tell the whole story, however.

The presence and quantity of antibodies don’t accurately predict whether one has acquired protection against the disease, according to Richard Junghans, a veteran immunology researcher and physician.

Antibodies are “not what is important,” but rather “the easy thing to measure,” he told The Epoch Times via email.

“So that is what some people focus on because otherwise they do not have anything to say.”

Some people who’ve already had COVID-19 may not exhibit antibodies at all, but have T-cell immunity, noted Junghans, who’s authored numerous research papers and devised methods to treat diseases like cancer and HIV, including through antibody and T-cell engineering and immunotherapy.

T-cells are capable of destroying infected cells in the body. They can be trained by other components of the immune system to recognize different parts of the virus proteins. The vaccines only use the virus’s spike protein to prompt an immune response. If the spike protein mutates enough, the virus will likely pass unnoticed after some time. On the other hand, the natural infection exposes the immune system not just to the spike protein, but also more than 20 other viral proteins, any of which can be recognized and targeted by immune T-cells to eradicate virus-producing cells, Junghans explained.

“The likelihood, therefore, of simultaneously bypassing the multiprotein immunity of natural infection (natural immunity) is expected to be lower risk for second infection than that from a single protein immunity (vaccine immunity).”

That’s why infection-induced T-cell immunity should be more durable than protection bestowed by the COVID-19 vaccines.

The explosion of COVID-19 infection in January has been attributed to the Omicron variant of the virus. The variant indeed sports a substantially modified spike protein and is thus more likely to dodge protections induced by vaccines or prior infections. It appears to be more transmissible, but less virulent.

COVID-related hospital admissions have dropped to 1,455 a day in CDC’s 7-day average on April 4. In mid-January, the number stood at more than 21,000.