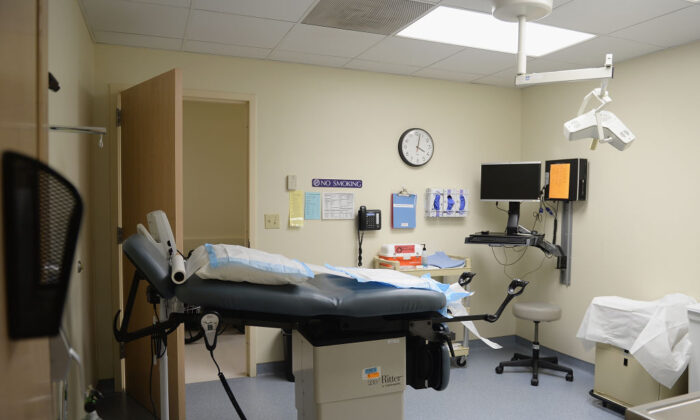 An exam room sits empty in the Planned Parenthood Reproductive Health Services Center in St Louis, Mo., on May 28, 2019. (Michael B. Thomas/Getty Images)
US News

Abortion clinics in multiple states closed their doors on June 25 following the Supreme Court decision to overturn Roe v. Wade and allow states to pass their own laws regulating access to abortion.

Around half of the states are expected to press ahead with banning abortion after the high court’s landmark ruling, according to the Guttmacher Institute, while in a handful of states with so-called trigger laws, abortion has already become illegal.

Bans in Mississippi and North Dakota will come into force when their respective attorneys general sign off, while Wyoming’s prohibition will take effect within days.

Tennessee will have its ban applied in 30 days, while Idaho and Texas will see bans applied 30 days after the official judgment. Abortion has become illegal in the following states: Kentucky, Louisiana, Arkansas, South Dakota, Missouri, Oklahoma, Alabama, and Utah.

Staff at the Alabama Women’s Center for Reproductive Alternatives in Huntsville on Friday told women in the waiting room that they could not carry out any more abortions that day, though the women were given a list of out-of-state clinics still doing abortions.

At an abortion clinic in Little Rock, Arkansas, the doors to the patient area shut as soon as the Supreme Court’s decision was formally announced.

“No matter how hard we prepare for bad news, when it finally hits, it hits hard,” a nurse at the clinic told the BBC.

An abortion clinic in New Orleans, Louisiana, one of three that performs the procedure in the state, was also shuttered on Friday.

In Texas, where trigger laws don’t go into effect for another month, providers suspended abortions while they seek legal advice on whether they are subject to an abortion ban based on laws passed in the 1920s.

Texas Republican Attorney General Ken Paxton, who announced the statewide closure of his agency’s office on Friday “in honor of the nearly 70 million unborn babies killed in the womb since 1973,” warned in a letter that prosecutors could immediately choose to pursue criminal prosecutions based on earlier laws that were unenforceable while Roe v. Wade stood.

Similarly, the existence of a 19th-century abortion ban in West Virginia led a clinic there to stop performing the procedure.

Several providers in Arizona halted abortions on Friday as they seek to determine whether pre-statehood laws may be grounds for prosecution.

Overall, repealing Roe v. Wade means that some 36 million women of reproductive age will lose access to abortion in their states, according to research from Planned Parenthood.

Predictably, the decision to overturn Roe v. Wade has drawn mixed reactions, with demonstrators outside the Supreme Court voicing both indignation and jubilation.