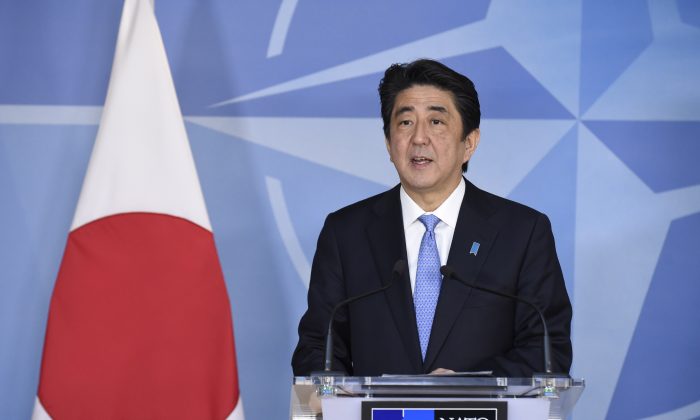 Japanese Prime Minister Shinzo Abe gives a joint press with the NATO Secretary General after the NAC meeting at the NATO headquarters in Brussels on May 6, 2014. (JOHN THYS/AFP/Getty Images)
News

Abenomics Is a Failure

Abenomics was supposed to rekindle Japan’s flagging economy through exports and inflation, mainly by printing money. It’s not working.

“Monetary debasement does not result in an economic recovery, because no nation can force another to pay for its recovery,” writes Patrick Barron of the Ludwig von Mises Institute of Canada.

Case in point: Japan’s March trade deficit widened to $11 billion in March and GDP growth slowed to 0.7 percent in the fourth quarter of 2013.

The bank of Japan is printing $71 billion per month and monetizes government debt to stoke inflation, weaken the currency and create growth, but the first fickle effects are now wearing off and debt recently surpassed 1 quadrillion yen. That’s 15 zeros or almost 10 trillion dollars for an economy less than half the size of the United States.

While the yen significantly weakened in 2013 (it fell 22 percent against the dollar), growth only picked up briefly at the end of 2013 and then flattened out around the turn of the year.   This is mostly because inefficiencies in the economy (too much debt, not enough innovation) remain and rising import costs are more than offsetting rising exports. So imports grew 23.2 percent in March, whereas exports only went up 6.2 percent.

Japan depends on imports for raw materials (especially energy), which rise in price as the yen weakens. If the economy doesn’t provide an endogenous cost buffer, like cheap land and labor for example, imports rise at least as fast as exports.

This way, there is no gain for the general economy, although some exporters might benefit and their shares may rise. As usual, it is the consumers who pay the price for this futile exercise through higher prices for goods and higher taxes to service government debt.