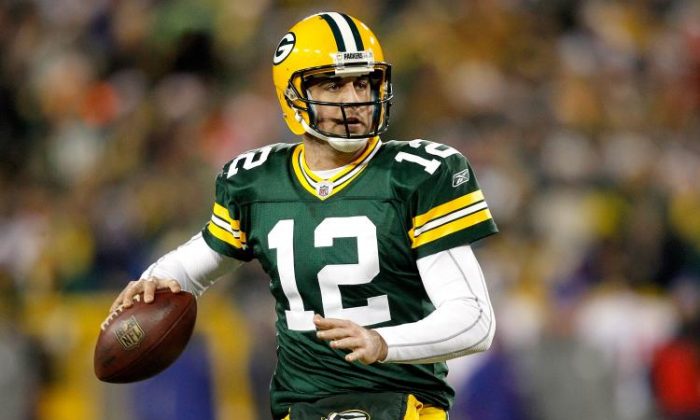 Aaron Rodgers #12 of the Green Bay Packers rolls out of the pocket against the New York Giants at Lambeau Field on December 26, 2010 in Green Bay, Wisconsin. (Matthew Stockman/Getty Images)
NFL

Green Bay Packers quarterback Aaron Rodgers admitted on Tuesday that he misled some people about his vaccination status following criticisms he received after being diagnosed with COVID-19.

Rodgers shared the new information during an interview on “The Pat McAfee Show” on Tuesday.

“I made some comments that people might have felt were misleading, and to anybody who felt misled by those comments, I take full responsibility for those comments,” Rodgers said.

Rodgers admitted the COVID-19 vaccine can be “polarizing.” He also accepted full responsibility for misleading “some people.”

“I shared an opinion that is polarizing. I get it,” Rodgers said. “And I misled some people about my status, which I take full responsibility of, those comments.”

Despite his apology, Rodgers did not back down from his stance on the vaccine.

“In the end, I have to stay true to who I am and what I’m about, and I stand behind the things that I said,” the quarterback added.

Currently off the active roster due to his positive COVID-19 status, Rodgers could be cleared early enough to play this Sunday as the Packers face the Seattle Seahawks.

The vaccine controversy has led to strong pushback from a variety of NFL voices, including Hall of Fame quarterback and Fox NFL Sunday analyst Terry Bradshaw.

“You lied to everyone,” Bradshaw told viewers during last weekend’s edition of “Fox NFL Sunday.”

“We are a divided nation on the COVID-19, whether or not to take the vaccine. And unfortunately, we’ve got players that pretty much think only about themselves. And I’m extremely disappointed in the actions of Aaron Rodgers,” he added.

In contrast, Rodgers’ sponsor State Farm Insurance, has stood beside the MVP.

“We don’t support some of the statements that he has made, but we respect his right to have his own personal point of view,” the company said in the statement.

“We recognize our customers, employees, agents, and brand ambassadors come from all walks of life, with differing viewpoints on many issues. Our mission at State Farm is to support safer, stronger communities. To that end, we encourage vaccinations, but respect everyone’s right to make a choice based on their personal circumstances.”

Another Rodgers’ partner, Prevea Health, took a different approach. The company chose to part ways with the quarterback following his vaccine views.

“Aaron has been a partner of Prevea Health, serving as a spokesperson and supporting the health care organization’s health and wellness initiatives throughout Wisconsin, since 2012.

“Prevea Health remains deeply committed to protecting its patients, staff, providers, and communities amidst the COVID-19 pandemic,” the statement continues.

“This includes encouraging and helping all eligible populations to become vaccinated against COVID-19 to prevent the virus from further significantly impacting lives and livelihoods,” the company said in a statement.