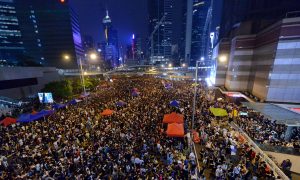 HONG KONG—On Sept. 29 the government withdrew the riot police, and at least 100 thousand students and adults continued gathering outside the central government offices in Admiralty, and in Causeway, Wan Chai, and Mong Kok. After a night of terror on Sept. 28, the mood in the city had shifted, a shift perhaps captured by an Epoch Times photograph that went viral.

On the night of Sept. 28, a young protester stood opposite the police outside the Central Government offices. Suddenly, and without provocation, the police discharged pepper spray.

The young man was preoccupied with filming, and the pepper spray went onto his face and in his eyes. He cried out in pain, “We are unarmed. How can you attack us like that?”

The policeman standing opposite the young man said, “I know, I know.” Then, while dressed in the face shield and gas mask that made him look like something other than a human being, the policeman took out his own water bottle and began rinsing the young man’s eyes.

The simple image has touched countless Hongkongers. They find the photo soothing in a time of trouble. It seems to encourage people to set aside their anger, and the positive feelings it engenders are circulating through the Internet and into society.

Within a few hours after the photo was uploaded to the Hong Kong Epoch Times Facebook page, over a million people saw the post in their news feed.

One netizen responding to the photo wrote, “Of course we understand they [the police] are just doing their jobs. We are not mad at them. We are mad at the authorities.”

Another wrote, “I used to be a policeman and understand they have to obey orders when on duty. Why only put the blame on frontline police? From my point of view, it’s the commissioner who should take the most responsibility. He should apologize and be dismissed from his position. Note that it is DIMISSED!”

“The police have gone too far, but the chief criminals are [Chief Executive] Leung Chun-ying and [Police Commissioner] Tsang Wai-hung. Should have them kneel and apologize to everybody,” wrote a netizen.

Another netizen wrote, “I heard the police kept saying ‘sorry’ to protesters while firing pepper spray.”

Some netizens also showed support and admiration for the reporters and photographers working at the front lines. “Without you guys, there won’t be any news. Thank you all for risking your lives to record everything from the beginning,” read one post.

The photographer Yu Gang said that while covering the protests he was caught in the tear gas and could hardly breathe. A few people helped him get out of that place, and one of them was a policeman. Yu remembered he saw the word “police” on one person through a translucent rain coat.

After the police fired volleys of tear gas into the crowds on the night of the 28th, the authorities obviously realized the gravity of the situation and changed their tactics.

Condemnation for the police action immediately descended on Hong Kong from around the world, and statements of support for democracy in Hong Kong were forthcoming from the UN Secretary General, the White House, and Canada’s foreign ministry.

In Hong Kong, the indignation over the use of pepper spray and tear gas against unarmed students and protesters is citywide and extends through all parts of society.

Beneath the indignation, there is a mutual grief. Hongkongers have lost faith in the police, and a relationship built over a long period of time is now gone.

There are reports that the Hong Kong police are split on how to handle the demonstrators. Some are tormented at having targeted unarmed and compassionate young students, some of whom may be their relatives or people they know. After the night of tear gassing, some police announced their resignations on Facebook.

In the current situation, the police will have a hard time increasing the violence. Hong Kong is a special region. It is a small city with a population of about 7 million. Inhabitants here share the same Chinese traditions and also the colonial culture inherited from the United Kingdom. They mainly speak Cantonese and some English. They identify with one another.

The pro-democracy protesters have won over the whole city, even the entire world, with their peacefulness, compassion, and tolerance.

A Hongkonger wrote on Facebook that he has never seen such polite demonstrators. They have not damaged a single car or harmed any public facilities or anything at all. They did not attempt to fight back after being doused with pepper spray and being immersed in clouds of tear gas. They pick up their trash and clean up after themselves.

During their demonstrations, they sing and cry. They distribute food and water in an orderly way. Some students study at the site.

When the coordinator of the rally asked the protesters to leave after the police unleashed the tear gas on the 28th, none left. Instead, more people came to join. They are fighting for a better Hong Kong and displaying the true spirit of Hong Kong for the whole world to see.

As a Hongkonger wrote on the internet, “At this moment, I have to admit that I’m truly proud of you all, my fellow Hong Kong people!”