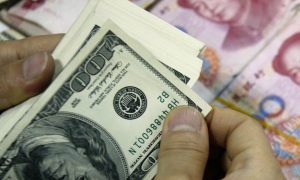 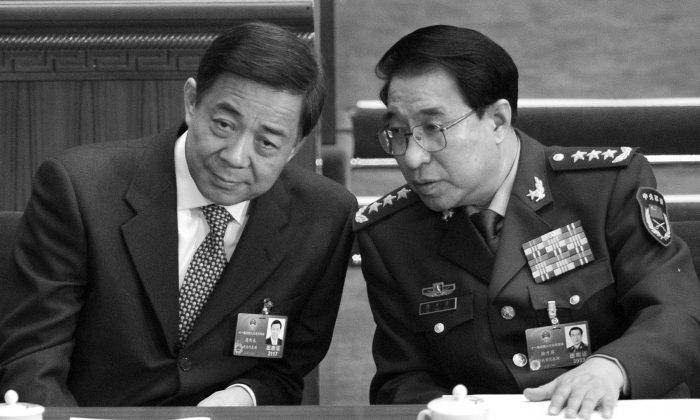 Xu Caihou (R), former vice chairman of the Central Military Commission, speaks to Bo Xilai, former Politburo member, during the opening session of the National People's Congress at the Great Hall of the People in Beijing on March 5, 2012. Xu was recently purged from the Chinese Communist Party, ostensibly for corruption. (Liu Jin/AFP/Getty Images)
China

In a dramatic gesture on Monday four high-ranking officials in China were stripped of their Communist Party memberships on the same day—one of them a former top military official, all of them guilty of affiliations with the old guard leadership group that Xi Jinping, the current Party leader, is systematically purging.

Xu Caihou, the most prominent target, was until late 2012 the vice chairman of the Central Military Commission, which exercises Party control over the People’s Liberation Army. That post, granted to him by Jiang Zemin, the Party leader from 1989 until 2002, made him one of the most powerful men in the Chinese military.

Jiang’s clout in personnel and policy continued for at least a decade after he formally left office. Analysts of China’s political system suggest that with these purges, Xi Jinping is rooting out Jiang’s lingering influence, held tenaciously by his followers across different parts of the government, Party, and military.

Official statements about Xu said that he would be handed to military prosecutors for punishment. Stern editorials in Party-controlled media organs justified the decision as part of the fight against corruption, a matter of life and death for the Party and China, the statements said.

“The investigation of serious issues related with Xu Caihou further demonstrates Party central’s clear cut attitude of strict control over the Party and the army, and the zero-tolerance attitude to punishing corruption,” said a statement in People’s Daily, the official mouthpiece of the Party.

The media barrage against Xu’s crimes was clearly coordinated, with Xinhua, the official news agency of the Chinese regime, and the People’s Liberation Army Daily, the mouthpiece of the military, also providing their own takes on the development.

“Leading cadres at all levels must nurture their Party spirit, firmly establish their Marxist outlook, outlook on life, values, authority, position, and personal interests, and consciously withstand every manner of inducement and test,” stated Xinhua.

“Our military is the armed group that carries out the Party’s political missions,” said the People’s Liberation Army Daily. “The army holds the gun barrel, and there will be no place for corrupt elements to hide themselves. The Party’s political requirement for the army is that it must achieve absolute loyalty, absolute purity, absolute reliability.”

All of the official channels went to lengths to stress the formal elements of the case—corruption, the use of a position of power to improperly assist others, embezzlement by family members, and more—while taking the opportunity to rally support behind the strict rule of Xi Jinping.

Despite this, an examination of the personal ties, career paths, and affiliations of the four individuals purged from the Party reveals a clear set of connections: all of them were either associated with or directly promoted by Jiang Zemin, the former Party leader, or Zhou Yongkang, the former security czar who has now also been purged, and a longtime protégé of Jiang Zemin.

“These latest detentions again provoke us to wonder if Xi is really an anti-graft crusader, rooting out corruption in the PLA, or if he is primarily seeking to eliminate his political rivals,” wrote Jacqueline Newmeyer Deal, president of Long Term Strategy Group LLC, located in Cambridge, Mass., in an email. “The primacy of political motivations seems hard to deny because so many of those targeted have been associated with Bo Xilai and Zhou Yongkang. We all know that the orbits of corruption in China are not confined to these two stars.”

The expulsion of Xu Caihou is a case study in political patronage, and the significance of personal networks in influencing the Communist Party’s ability to actually enforce its commands, according to experts.

“Xu Caihou was promoted by Jiang Zemin, and under him, Xu was himself in charge of promoting a lot of military officials. Many military officials that didn’t want to follow orders were promoted by Xu Caihou,” said Cheng Xiaonong, a political analyst now based in the United States, who used to conduct research at an official think tank in the 1980s under reformist Party leader Zhao Ziyang.

“Those people belong to Xu Caihou, and Xu Caihou belongs to Jiang Zemin. It’s a group, and they defend one another. A vested interest group,” Cheng said. Gen. Xu was also believed to be long close to the expelled Communist Party official Bo Xilai, who is currently serving a life sentence in prison.

Thus, despite Gen. Xu no longer wielding any official power, hunting him down and punishing him for corruption—a rare act in China, and one that makes Xu the highest-ranking member of the military to be purged in a generation—sends a clear and powerful signal to the officials he brought up during his decades in service.

“The people who gave money to Xu Caihou for their own promotions now understand the situation. Xi is saying: ‘You’re all in trouble. Do you choose political loyalty or do you choose to be arrested?'” Cheng said, framing the power dynamic in a manner reminiscent of the “Godfather” films. “Xi Jinping is using Xu Caihou’s case as a threat to the remaining officials, ‘Now your life is in my hands. If you want to survive, bow down.'”

Observers generally agree that once Xu was arrested in March, there was little chance that he would be dealt with gently: whenever such a high ranking official is taken away, the punishment is generally severe.

The other officials stripped of their Party membership on the same day were:

Jiang Jiemin, head of the State-owned Assets Supervision and Administration Commission, the agency that oversees all state-owned companies in China, and former chairman of the China National Petroleum Corporation, the largest state-run petroleum company;

Li Dongsheng, vice minister of public security and head of the 610 Office, the extralegal Party security taskforce set up by Jiang Zemin on June 10, 1999, to coordinate and carry out the sweeping persecution of the Falun Gong spiritual group;

These men are known factional allies of Jiang Zemin and Zhou Yongkang, as indicated by their career paths, which in politicized areas of China, like domestic security and the petroleum sector, are heavily weighted by personal allegiance and loyalty. Zhou was known to be a godfather of the lucrative petroleum industry, targeted last year for a thorough weeding-out by Communist Party anti-corruption investigators. Jiang Jiemin and Wang Yongchun had already been put under investigation in August 2013 for “serious violations of law and discipline.”

Bo Xilai and Zhou Yongkang, close allies of Jiang Zemin, are widely believed to have plotted to remove Xi Jinping from power around the major leadership transition when Xi rose to power in 2012. Analysts of China’s political system previously interviewed by Epoch Times say that the coup attempt was motivated by Jiang Zemin and his allies’ wish to remain in control of the Party, and to ensure that they would not be held accountable for the crimes committed in the persecution of Falun Gong, and that the campaign would continue.

The desperation of these officials to keep their hands on the levers of power, according to this analysis, in turn forced Xi Jinping into a far-reaching and remorseless purge. Official reports said that to date over 400 officials are known to have been removed from office—an unknown number because of their involvement in Jiang’s clique. Several officials have died from torture during interrogation.