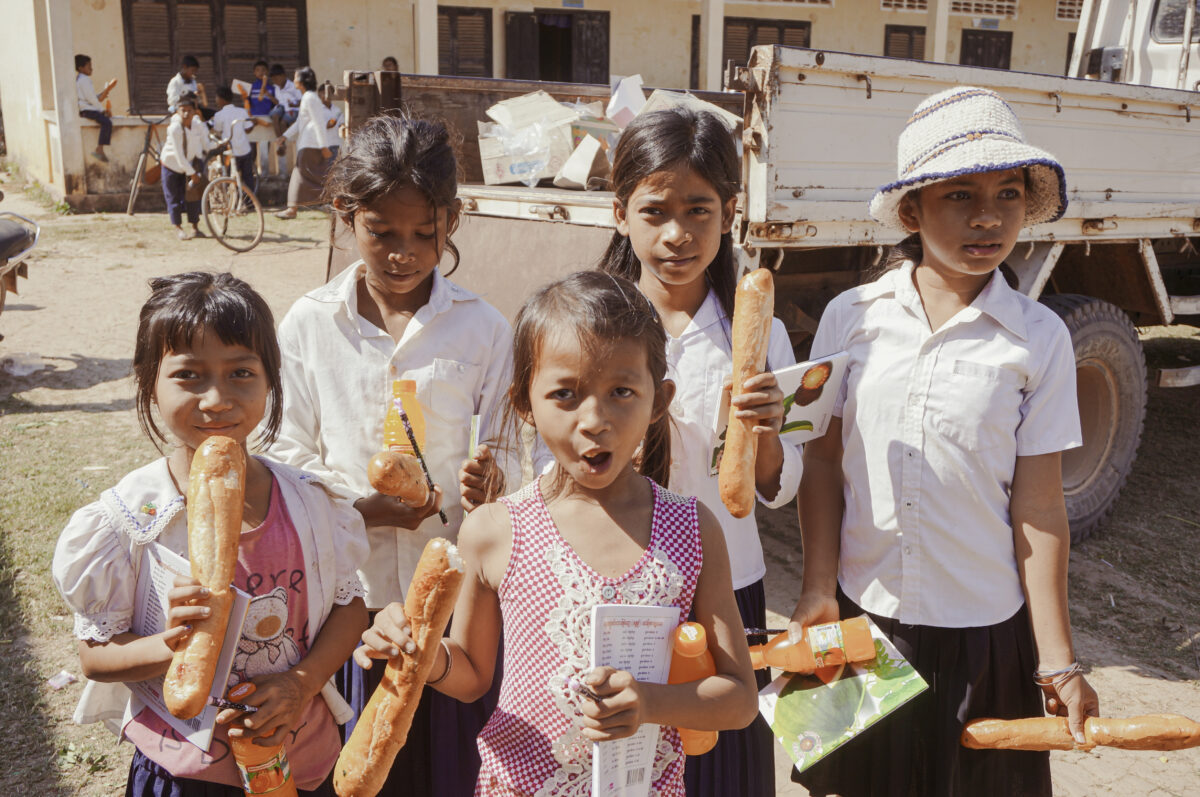 In 2017, Amanda Prak’s organization delivered food and supplies to a new primary school that it helped fund, in Battambang province, Cambodia. (Courtesy of H.O.P.E.)
American Essence

Forty years after reaching America, a survivor of Cambodia’s Killing Fields inspires others with acts of bravery and charity
BY Neil Cotiaux TIMEJune 24, 2022 PRINT

In 1975, in the Killing Fields of Cambodia, Sokanha Prak assumed the role of mother, father, and protector to her 1-, 3-, and 4-year-old siblings. Fending for them and herself in the countryside, the 6-year-old had no choice.

Sokanha’s parents had been ripped from them by the Khmer Rouge, a Chinese Communist-backed military force intent on creating a faux-utopian society built on deprivation, thought control, and, when necessary, execution. Equipped only with a child’s mind and body, she worked herself to exhaustion, hour by hour, knowing that her captors could take all of their lives at any moment.

Today, 9,000 miles from the site of the Southeast Asian detention camp that smacked of the Nazi Holocaust, Sokanha, 53, now calls herself Amanda—in Latin, “worthy of love”—at the suggestion of a friend she met as a teen. It’s an altogether fitting moniker: when she was born, her umbilical cord was wrapped around her neck, and a midwife saved her life—only for her to face the terrors of totalitarianism in childhood.

Now settled in a suburban home outside Richmond, Virginia, Amanda is mostly freed of the many hellish nightmares that once hounded her. She is the mother of two adult sons and works as a hairstylist. And as the survivor of a campaign of genocide that claimed an estimated 2 million lives, Amanda makes her own life story known in the hopes that the world will never forget.

The child now called Amanda spent her early life in Battambang, a picturesque province with French colonial architecture a couple hundred miles from Phnom Penh, Cambodia’s capital. Her father, Suntara, was a schoolteacher and her mother, Soeurm, a housewife dedicated to caring for her five children. On April 17, 1975, armed soldiers of the Khmer Rouge, backed by tanks, ordered everyone in the province to join a massive march into the unknown. Suntara, who was not home at the time, caught up with them three hours later.

Filling a power vacuum in a civil war that left both a monarchy and a republic defeated, the Khmer Rouge would torment the Prak family and millions like them from 1975 to 1979, removing city dwellers and intellectuals to work in the countryside, separating family members, and exposing them to malnutrition, disease, and execution in the name of a supposedly equitable agrarian society.

“What I remember is, we had to learn how to survive each day at a time, to forage for food, look for insects, crickets—anything that hops, that crawls, anything to fill our tummy,” Amanda recalled. “We were all very bloated because we didn’t have enough to eat.”

She was left in charge of three young siblings as her parents worked in the fields. “We never saw Mom. She leaves before we wake up.” Months later, everyone got separated into different zones, to be placed under the control of different labor leaders. The Prak family was in zone 3. Nearly all those in zone 4 died due to either starvation or mass execution.

Adults had to join “reeducation” classes every evening, where they were forced to listen to propaganda. Their captors also eavesdropped on the families’ conversations to ensure that they toed the line. “They crawl under your hut,” Amanda said. “We couldn’t talk to each other.”

Two years after her family was forced to leave their home, the girl then named Sokanha was separated from her siblings and placed in a child labor camp. “These were all children building a dam with their bare hands. Thousands of them died because everybody starved,” she said. “Every night, I really wished that I [would] go to sleep and just don’t wake up.” After about two years, she finally saw her mother—on a day when team leaders brought workers from another camp to finish the crop planting. “But we cannot speak to each other at all. We cannot even acknowledge each other,” she remembered, her head bowed and voice faltering.

The Vietnamese invaded in January 1979, precipitating the collapse of the Khmer Rouge. It was not until April that Suntara was able to reunite with some family members. Two of Amanda’s siblings did not survive the Khmer Rouge’s four-year reign of terror. In July, the surviving family members fled through the jungle. “You see water, you just drank. You lowered yourself until you drank like an animal.” Amanda recalled there were corpses floating in the water, but they had no other choice of drinking water. The possibility of stepping on a land mine was a constant fear.

A refugee camp in Thailand awaited, which the family eventually reached via a bus run by Thai drivers. The Prak family would then spend the next two years waiting for a permanent home overseas.

On August 23, 1981, Vicky and Fred Saunders met members of the Prak family at Richmond’s airport, Byrd Field. As sponsors, they had, among other things, arranged for temporary housing and a well-stocked refrigerator.

Now age 12 but unable to read or write in English or her native language, Sokanha, as she was still called, was placed in fifth grade. She, along with her older brother, soon discovered that not everyone in America was accepting like the Saunders. “There were so many times that we hid in the dark house or under the crawl space” rather than face prejudice at school. On the bus, some schoolmates stuck their feet out so they would trip and fall. Others pulled their hair and jeered at them. Their parents urged them to pursue their education and not give up. Yet prejudice persisted.

“But then Stephanie came along, … my first best friend. Her name’s Stephanie Price. So I told Stephanie, ‘I’m going to become an American citizen someday, and I want you and your mom to give me a name.’” They named her Amanda. Slowly, she began to feel more accepted.

Starting fresh, Amanda and her family moved to California in 1986 in search of greater opportunity. She completed high school and became a citizen, but the lure of the Golden State faded over time. The family returned to Richmond in the 1990s, where Amanda worked on a window production line, then opened her first hair salon.

No matter what their circumstances, most immigrants feel a need to give back to their native land, many through remittances. Amanda had a different idea. In 2007, she founded One Hundred Pounds of Hope, a nonprofit that shipped truckloads of rice to impoverished villages in Cambodia. After several years, Suntara asked his daughter, “Why don’t you do something more permanent?” He suggested, “Why not give them something that lasts a lifetime?”

The answer was Helping Others Pursue Education, a nonprofit founded in 2019 dedicated to building schools in Cambodia. The first school has six classrooms, books, equipment, and a playground as well as donated food, clean drinking water, hand-washing stations, and indoor bathrooms, with plans to eventually enroll 400 students. HOPE expects to break ground for a second school this year.

As HOPE pursues its mission overseas, Amanda is in her 16th year of speaking at public events and in high schools, recalling the broken dreams and broken bodies inflicted by the Khmer Rouge’s social engineering schemes, in hopes of educating people about its atrocities.

Timothy Hensley, an official at the Virginia Holocaust Museum, said, “While most people think of gas chambers and the main gate at Birkenau [concentration camp] when they think about genocide, it is important to keep in mind that the Nazis began the ‘Final Solution to the Jewish Question’ in the open-air killing phase in Eastern Europe,” referring to the mass murder of Jews throughout Europe between 1941 and 1945. In Cambodia, Hensley said, the Khmer Rouge targeted any group that exhibited outside influences and could be considered as diluting a “pure” agrarian Khmer people. Slave labor was used by both the Nazis and the Khmer Rouge, with large numbers dying from malnutrition, overwork, and disease. Hensley said the museum will continue to shine a light on Amanda Prak’s story.

“This could happen anytime, anywhere, really,” Amanda warned. Her statement could just as easily refer to any number of other crimes against humanity throughout history, involving Armenians, Bosniaks and Bosnian Croats, the Tutsi in Rwanda, or Jews during the Russian pogroms.

Thinking of future generations in both America and Cambodia, she hopes that, in the spirit of the name her best friend gave her, people all over the world can love and feel loved. “I want them to be kind. The world needs a lot of kindness,” Amanda said.