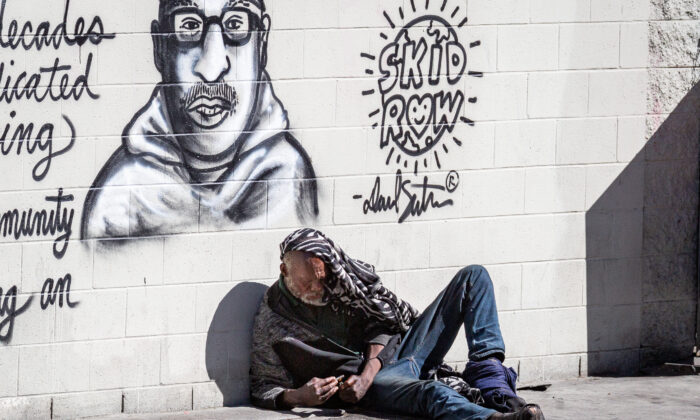 A Solution to America’s Drug Crisis

The black market supplying drugs to our nation is doubling our crime rate, exploiting our addicts, funding America’s enemies, and costing you billions of dollars per year.

The use of illegal opiates and drugs in our society affects each one of us by significantly increasing crime rates, death overdoses approaching 70,000 people per year, billions of dollars going to foreign regimes hostile to the United States, and ineffective domestic programs that don’t solve the problem.

All of this can be corrected if we take the profit away from the market that supplies drugs on our streets.

The black market associated with illegal drug use, particularly heroin, fentanyl, and other opiates, was estimated to be a $150 billion–$200 billion industry in a 2016 study by the RAND Corporation. A more recent estimate by the U.N. Office on Drugs and Crime (UNODC) cites a $200 billion–$625 billion per year figure for the United States alone and a $2.5 trillion global market. Since it’s a black (illegal) market, valid estimates are difficult to verify, but sales associated with this avoidable industry rank the illegal drug market among the top 10 corporations in the United States today—and No. 1 in profitability.

How is this nongovernment, unregulated industry financed? Excluding international transactions and purchases, criminal justice studies show that the illegal drug market is financed domestically by substance-addicted people who resort to stealing more than $150 billion annually to feed their drug habits. The black market exists because of the incredibly high profits that result from the exploitation of drug dependency in people who have no other means to obtain the drugs they crave.

Moreover, the government’s approach to the handling of the drug crisis, the bureaucracy in our misdirected rehabilitation programs, and unenforced drug laws have allowed this industry to survive.

If we’re to act on the drug crisis in the United States, we must first take the money out of the black market. To understand this approach, we must first examine the origin of the more common illegal drugs and how they’re brought to market.

Most of the drugs being pushed in the black market are opiates, such as morphine and codeine, which are extracted from the poppy plant grown mainly in Afghanistan, Burma, other parts of Asia, and Mexico, or cocaine, derived from the cocoa leaf mainly in South America. These drugs are very inexpensive to produce and readily available with a very high profit margin. Synthetic drugs, such as fentanyl, are even cheaper to produce and more dangerous. Today, fentanyl, which is produced primarily in China, is up to 80 times stronger than morphine and has a higher dependency and death rate.

In addition to these drugs is a myriad of chemical synthetics, such as hallucinogens, depressants, and stimulants, with repeated use leading to addiction. In our country, the only other outlet for the distribution of variants of all these drugs is through medical authorities who use them to treat patients with pain and other physical ailments under strict regulation (as it very well should be) and increasingly restrictive prescriptions. There are many other types and classes of drugs—both legal and illegal—however, for brevity, we’ll refer to only those “hard drugs” mentioned above and even exclude cannabis, as it’s currently considered legal in many municipalities.

Again, these drugs are incredibly inexpensive to produce. Let’s use heroin as an example, since it’s the most prominent illegally-used drug. It’s derived from the poppy plant and grown in countries that allow cultivation and the resultant product because of the tremendous export revenue received—mainly from the U.S. market. It costs very little to extract the gum-like morphine base residue from the plant, which grows rapidly and doesn’t need tending. The base residue is then sold to a processor, who chemically alters the substance into heroin.

Let’s review the process through which heroin reaches our streets to fully realize the tremendous profit involved in the black-market transactions of the product. We will use one kilogram (2.2 pounds) of heroin to illustrate our example.

In a foreign country, “A,” the farmer, sells the base product to “B,” the middleman. “B” pays “A” about $30 for a kilo of the morphine gum extract. “B” processes the extract into heroin and sells the product to “C,” the trafficker, who arranges for its export and smuggling into the United States. “B” sells the kilo to “C” for $20,000 to $100,000, depending on how many times the pure heroin has been “cut,” or diluted with substances such as lactose or dextrose, thereby increasing his quantity up to five times. “C” can then multiply his quantity by cutting it several more times. If a kilo is just 50 percent pure, it can be divided into 76,000 bags. The bags of heroin are distributed to “D,” the dealers, who then sell to the users for about $10 to $20 per bag. Depending on how many times the drug has been cut, the retail street sales can generate a profit between $760,000 to $1.5 million for just one kilo!

The profit from cocaine is much more challenging to estimate. The process from wholesaler to street sales is much the same. From the few dollars initially paid to the grower of the cocoa leaf for his extract, the price of a processed kilo, depending upon its purity, can range from $30,000 to $50,000 at the wholesale level, which, in turn, can quickly generate $150,000 when sold in single grams on the street.

The synthetic variety of drugs that have recently flooded our streets, such as fentanyl, are even cheaper to produce and are more dangerous and profitable.

For a person with a moderate addiction, it’s common to spend $150 to $350 per day depending upon the drug of use. More severe addictions can approach $1,000 per day. Addiction to any drug isn’t something to be taken lightly. The person is sick, and almost any serious substance use can preclude a person from engaging in productive and meaningful long-term employment. He’ll most likely turn to crime to finance his addiction when he doesn’t have money. The price of a “fix” and what the person does to pay for that fix is a problem for him and the rest of us who have to deal with the consequences of a black market existing.

According to the U.S. Department of Justice, data collected from those arrested for crimes across 24 different cities show that 42 percent to 79 percent of those arrested tested positive for illegal drugs. Having worked for the San Francisco District Attorney’s Office for five years, I would argue that closer to 75 percent of all criminal offenses involves drug use or dependency.

Eliminate the profit in the black market, and you automatically collapse the drug-crime syndrome. Failure to recognize this results in the price we pay with tax dollars for needless crime, ineffective drug programs that have been proven to not work, lost lives through unsupervised overdosing, and all the while, lining the pockets of foreign regimes and syndicates that aren’t our friends.

How to Implement the Solution

We can implement the solution by establishing government-operated clinics that would produce and dispense these drugs now only available in the illegal market, along with legal drugs used for rehabilitation (e.g., methadone) only to addicts in a regulated and controlled environment. This program could easily be absorbed within the existing public health department facilities and services that operate in almost every community in the United States.

The cost to produce the necessary drugs in a government-controlled environment is minuscule. The cost to implement such a program would be more than covered by the savings gained through eliminating street crime caused by addicts who now must resort to crime to feed their addiction and the elimination of the ineffective and unpredictable drug outreach programs that have been proven to not reduce the problem. In addition, we would be making a genuine attempt to salvage the lives of people with substance-use disorders and eliminate the drug dealers who exploit them.

We’ve seen a version of this solution work. In England, various opiates are available and administered to registered addicts through government-run programs. The government produces and administers the drugs at a very low cost, successfully eliminating the black market. In San Francisco and New York, a person would have to raise $1,000 to purchase the same amount of heroin he could get through supervised legal channels in London for less than $5.

Some of you might be thinking, “By offering the addict free heroin, you foreclose all chance of curing him.” Let’s look at England again. The relative ease of acquiring the drug hasn’t increased addiction. The UK has a population of about 60 million people. Home Office figures show that the number of people in continuous treatment for primary opioid use has decreased from 113,869 in 2011 to 94,628 in 2018.

At least one-third of all addicts in England are in regular employment. In contrast, 2019 estimates of the number of intravenous drug users in San Francisco alone was about 22,000, with the city’s population at roughly 825,000 people. In 2020 and 2021, roughly 1,310 people died from drug overdoses, despite the city budgeting $71.4 million each year for treatment and overdose prevention programs.

To be clear, I’m not suggesting making illegal drugs readily available for just anyone to possess. Their dispensation would only be to bone fide addicts in a controlled environment, and anyone caught possessing illegal drugs with intent to distribute must be penalized under a new set of strict drug laws. If an addict wants to cure himself, this is his chance, and he can do so in conjunction with existing programs offering mental health services, education, employment, and housing support.

People with addiction who choose recovery would probably have better motivation and a greater chance of success since they would be making a free choice. However, statistics show that some people will sadly never curb their addiction. This strategy still supports them by offering a means to satisfy their specific need under regulated conditions, thus eliminating the need to acquire money by criminal means to purchase illegal drugs.

Along with the above-suggested approaches to fighting our No. 1 social crisis, it would be imperative to engage in both a new and effective comprehensive educational program about the dangers of drug experimentation and its toll upon the individual and society and a new set of strictly enforced drug laws that severely punish anyone caught possessing illegal drugs with the intent to distribute.

We must acknowledge that our country has one of the highest drug-related crime rates globally because our policies and approach to the crisis have allowed an illegal black market that causes so much damage to flourish that causes. We must deal with the disease rather than the symptoms. What’s being proposed in this column is a framework for a logical, humanitarian solution to reduce crime, provide a path to rehabilitation, and eliminate funds going to those who aren’t our friends.

The time has come for a drastic and new approach to a horrible crisis that won’t cure itself. Let’s defang this monstrous and illicit enterprise by eliminating the profit from the black-market drug trade.