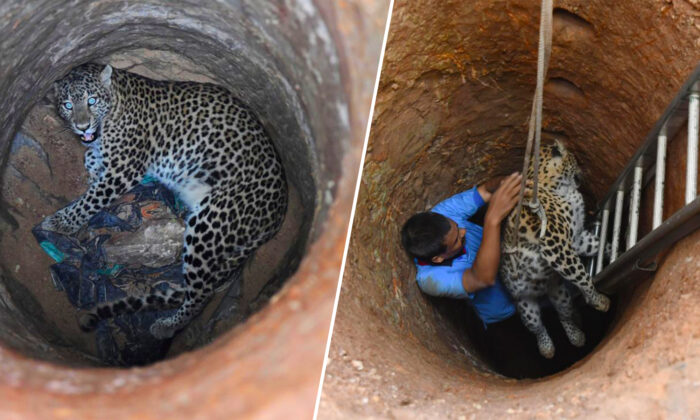 A Risky Rescue: Veterinarian Climbed Down a 30-foot Dry Well to Save a Trapped Leopard

Tigers, lions, and leopards aren’t exactly the kind of kitty cat to get too close to. For one veterinarian in India, however, he took it upon himself to get dangerously close to a leopard; conveniently, the spotty latter was a little sleepy after a friendly dart.

A scary scene met the villagers of Guwahati, in the northeastern state of Assam, one day in December 2017. They had discovered a leopard in an unusual place near a residential area—and she wasn’t happy one bit.

The then-7-year-old female leopard, which was believed to have wandered into the populated area in search of food, was found lying at the bottom of a 30-foot dry well and had been there for nearly two hours as per a report by the Hindustan Times.

In a video uploaded by ANI news agency, the helplessly trapped leopard snarls menacingly at the villagers looking down on her pitiable predicament.

It was a tricky operation for forestry officials to save the animal.

The animal was first shot with a tranquilizer dart by Dr. Bijoy Gogoi, a veterinarian, before a ladder was lowered into the well for him to descend with a rope harness.

With help from the villagers, Dr. Gogoi slowly climbed up the ladder while holding the tranquilized leopard and brought her to safety.

After the risky rescue, the big spotted cat, which appeared to be uninjured, was taken to the Assam State Zoo in a cage, as per media reports.

“Luckily there was no water [in the well] and it was about 30 feet deep inside so we have successfully rescued,” Dr. Gogoi told reporters after the incident, as per InsideEdition.

Kudos to the veterinarian and the villagers for extending their help to an animal in need.

In another incident that occurred in August 2019, a 3-year-old leopard was found fallen in a 30-foot dry well in a private farm near G. Hosahalli, in Gubbi taluk of Tumakuru District, in the southern part of India as per reports from The Hindu.

When local villagers found the big cat lying in the well, they immediately alerted officials from the Forest Department. A Rapid Response Team along with the forest officials arrived at the spot to rescue the leopard. However, as soon as news of the leopard spread, a huge crowd of villagers gathered around.

The Hindu further reported that forest officials had a hard time trying to control the mob. After the crowd left, the officials tranquilized the leopard and removed it from the well.

Officials told The Hindu, “The leopard is healthy and was not injured. He will be released into the forest.”