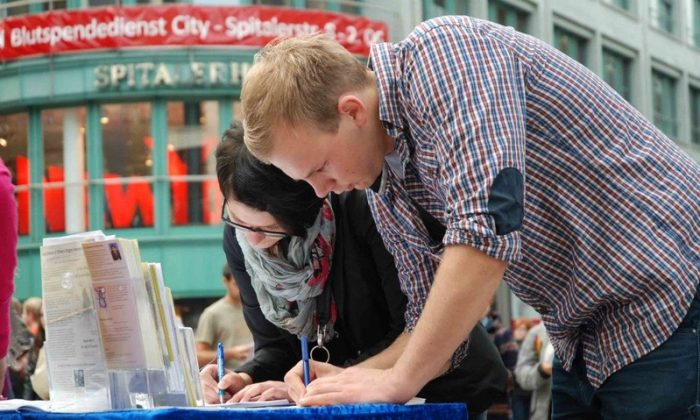 German citizens sign a petition against forced organ harvesting that is happening inside China. (DAFOH)
China

A Petition Against Organ Harvesting in China Reaches a Milestone

With the People’s Republic of China making a bid to sit on the Human Rights Council of the United Nations, here’s a petition that should cause every diplomat in the world to sit up and take notice: organized by Doctors Against Forced Organ Harvesting, a medical advocacy group, it calls on the the UN to demand that the PRC fully cease organ harvesting from prisoners of conscience.

It would surprise many to learn that the regime in China is even accused of engaging in such acts, though a mounting pile of evidence indicates that the harvesting has been taking place since around the year 2000. International attention has forced certain changes in the Chinese transplant system, including promises of reform, but Doctors Against Forced Organ Harvesting does not buy the story that all such harvesting activity has ceased. Particularly when China’s communist authorities continue to deny any wrongdoing.

The doctors group has collected nearly 450,000 signatures so far, from over 32 countries. It took the occasion of Oct. 1, the date of the founding of the PRC, to announce its progress on the petition. Theresa Chu, DAFOH’s legal adviser for the Asia-Pacific region, spoke at an event held in Hong Kong to mark the occasion. The plan is to continue collecting signatures and then submit them to the United Nations on Dec. 10.

Available on the group’s website, the petition says that those who sign it are “alarmed at the evidence of forced organ harvesting from detained Falun Gong practitioners in China.” The petition described this as “an egregiously evil form of persecution against this peaceful spiritual discipline.”

The UN Human Rights High Commissioner is entreated to call on the PRC to “immediately end” forced organ harvesting, initiate an investigation intended to prosecute perpetrators, and call on the Chinese Communist Party to stop its campaign against practitioners of Falun Gong in general. Falun Gong is a spiritual discipline that has been persecuted in China since 1999.

Such demands may not be fully met, given that ending the campaign against Falun Gong would lead to demands to hold top Party leaders accountable for crimes against humanity, but international pressure has forced change in China previously, according to Damon Noto, the spokesperson of DAFOH.

“Even though we may not get the end of forced organ harvesting, we may see them further open up and curtail what’s going on,” Noto said. “The intent is to have pressure brought on China from many angles: the UN, the international transplant community, the medical community, and hope that the total of all these forces putting pressure will see some change.”

The United Nations Committee Against Torture in 2008 demanded that the PRC provide “a full explanation of the source of organ transplants,” initiate an investigation, and “take measures, as appropriate, to ensure that those responsible for such abuses are prosecuted and punished.”

As pressure increased, the Chinese regime went from outright denying they use executed prisoners, to admitting that over 90 percent of their organs came from that source. Most recently, a Chinese medical official admitted that for years organs were harvested without consent.