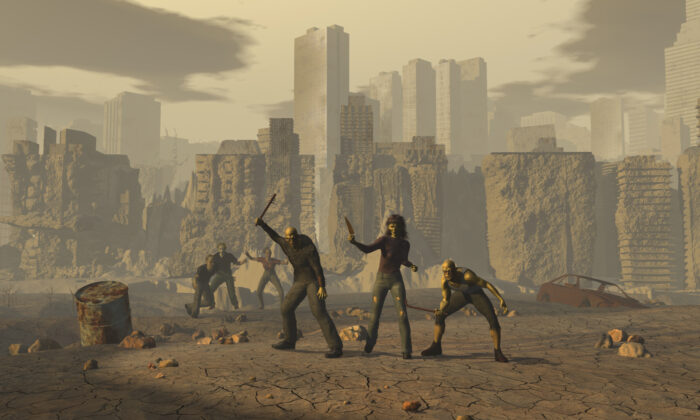 A New Age of Barbarism

Political leaders in the United States, Canada, Germany, and France—all NATO countries—got back on script yesterday. They couldn’t wait to get to the microphones. They all seemed to have new energy and purpose in life. Politicians are made for this moment! They are vastly more talented at dishing out righteous opprobrium directed at foreign beasts, which make far more compelling enemies, than inveighing against invisible viruses.

As Russian bombs rained down on Ukraine, Western leaders—having spent the better part of two years bullying their citizens and quelling protests—spoke in soaring tones about freedom, democracy, peace, and human rights. They condemned the brutality of Putin and his revanchist vision of Tsarist restoration. They had a new sense of resolve in their moral superiority as leaders of the free and modern republics that do not invade their neighbors.

The part we do not see is that many of these people—together with media organs and administrators of many deep-state bureaucracies—are absolutely thrilled to start a new season.

Away with the appalling mismanagement of the pathogen. Away with public anger toward the lockdowns and mandates. Forget the collapse in children’s literacy, the rise in cancer, the waves of depression, the trucker protests, and the collapsing polls of many elected leaders. Forget, too, the inflation, the federal debt, supply-chain snarls, and goods shortages. Forget all the astonishing botches of everything.

Life was never as good in living memory as when we had a solid foreign enemy named Russia with a leader with a name and a face. Everything wrong with the world could be personalized, and with storybook thematics: good versus evil, freedom versus despotism, democracy versus dictatorship. This great struggle was so good for both sides that they made it last 40 years. There must be a certain nostalgia for those days alive in the hearts of incumbent political establishments today.

And so, Putin has given Western political elites a wonderful gift. He has created a template that allows them all to say in unison: There is something even worse than us. They can hope for a turnaround in their sagging polling numbers, new respect and appreciation for their strong leadership in a time of crisis, and more reliably depend on a deferential media machine that knows the ways of wartime require parroting whatever powerful foreign-policy experts say in public and private.

There is some powerful symbolism here with Putin’s outright military invasion. He knew that he could count on both India and China to look the other way, even tacitly approve his move. And he knew for sure that NATO countries would bluster and impose sanctions but were not in a position to do anything beyond that. He further knew that Ukraine was an easy win for him personally and politically. He has finally pushed back against NATO expansionism into Russia’s traditional sphere of influence, and caused the opening of a new chapter in world affairs. He has made it clear to the world that the American century is over.

Even more extraordinary, he has a clear path to retaining that power at home. Anti-war protests broke out in many cities in Russia. God bless these protestors, their resolve, their courage, their love of peace.

If Putin is looking for a way to deal with them, he need only look at how Justin Trudeau dealt with the protests in Ottawa. Dox them, seize their bank accounts, tow their trucks and cars, and send in heavy-armed military-style cops without badges and faces to clear the streets. Use facial recognition technology to follow up with people later, inquiring about their political loyalties.

The “free world” has lost the moral high ground to preach to the “unfree” world about rights, liberties, and democracy. For two years, almost every government in the West experimented with new forms of servitude in the name of public health. They showed how emergency powers can be deployed to lock people in their homes, shut businesses, cancel church, close parks, ban travel, censor speech—massive attacks on essential freedoms all justified simply because the people in power said it was justified.

Further, the pandemic response revived the utility of nationalism (with travel bans and even vaccine approvals), class demarcations in policy (essential and nonessential businesses and workers), segregation and discrimination based on biology (vaccine passports), and the unquestioned hegemony of the administrative state over the whole of society. The experience further proved that there need be no limits to state ambition: Even the absurd promise to eradicate a respiratory virus can serve as justification for a power grab.

Even the courts went silent, and the media could be relied upon to quell dissident voices and push out propaganda from the bureaucracies. Big Tech, once decried by the establishment for its libertarian ethos, also enlisted on the side of control, censoring and canceling accounts that raised doubts concerning the competence of the managerial elite.

What a lovely example to display to would-be authoritarians the world over! The pandemic response was brutal. It contradicted all law and tradition. It flew in the face of public-health science from the past. It was an enormous flop from a scientific point of view, of course. But the enterprise did create a political precedent that will resonate for decades. It firmly established that states can do what they want, when they want, provided the leadership maintains a posture of infallibility and the population is sufficiently fearful.

This was the West’s gift to Putin. Putin is now returning the favor. He has volunteered for the role of scapegoat for political establishments that are desperate for a change of topic, something that enables them to once again reclaim the vocabulary about freedom, no matter how implausible it might seem at first. Everyone knows that the best environment for controlling public opinion is the fog of war. All the better if it involves a far-away dictator with imperial ambitions.

The past two years have revealed to us what we would rather not have discovered, namely that freedom and rights, along with enlightened ideals and good science, are extraordinarily fragile. They are only guaranteed by a public that believes in them and is willing to stand up for them. When the cultural consensus in favor of liberty decays, terrible beasts are unleashed on the world.

There are two dates in my adult life that truly seemed darkly shattering of every enlightenment ideal. The first was March 12, 2020, when Donald Trump announced, under cover of emergency, the end of travel from Europe, the UK, and Australia, all in the name of virus avoidance. The second was Feb. 24, 2022, when Vladimir Putin took the first major steps in the restoration of the 19th-century Russian empire, thumbing his nose at the once-mighty U.S. empire and its pretensions to rule the world.

It’s a new chapter in a story of what could be a very dark century—unless and until enlightenment ideals once again ascend to commanding heights.