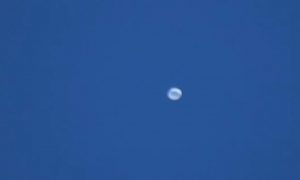 UFOs Spotted Over Colorado for the Past Month Are 'Bright', 'White' (Video)
0
Share Now
TelegramFacebookTweetEmailTellMeWeReddit
Copy Link
Beyond Science

A Mysterious Flash in the Sky Over Russia: Authorities ‘Refused to Comment’

The Siberian Times reports that regional media have been unable to identify the cause of a huge flash in the night sky seen from Chelyabinsk to the Sverdlovsk region. It also reported: “According to regional television, neither meteorologists nor scientists can explain the strange phenomenon. A local observatory indicated nothing fell from the sky on the day of the flash. Local officials  from the Emergencies Ministry refused to comment on the happening.”

A driver in Sverdlovsk captured the flash on his dashboard camera.

Australian publication the Courier Mail noted that dashboard cameras are common in Russia, where drivers feel the need to record accidents so insurance companies can not wiggle out of claims and traffic police officers have been known to be corrupt.

Teenagers also captured the flash in a video recording.

Chelyabinsk was the location of the famed meteorite explosion in 2013, though this flash seems to bear no resemblance to that occurrence.