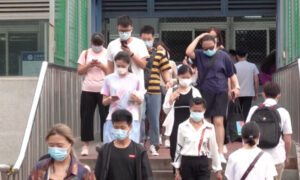 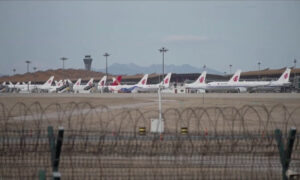 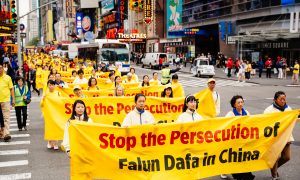 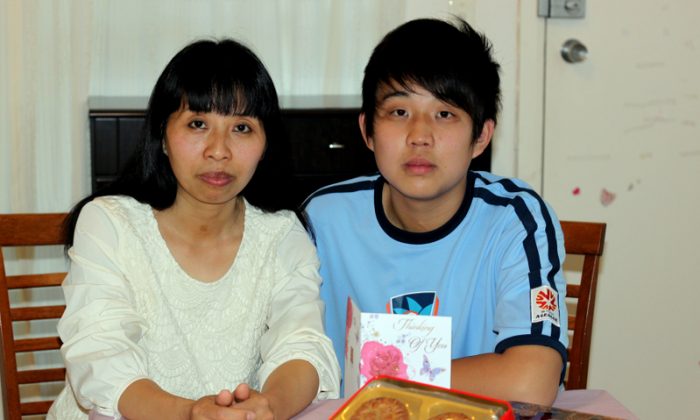 On Mid-Autumn Festival, Liu Chunli and her 15-year-old son Jia Mingzhen prepared a box of mooncake and a card for her husband Jia Ye, who is in a Chinese prison. They hope one day the family can celebrate the Mid-Autumn festival together. (Epoch Times)
China

A Moon Cake Uneaten and a Wish Unfulfilled

SYDNEY—Seeing his father, Jia Hua, eat a piece of moon cake is Jia Mingzhen’s greatest wish, but for him and his mother, Liu Chunli, a family reunion is just wishful thinking. The week before this year’s Moon Festival—traditionally a time for cake and family reunion, the mother and son sat down with the Epoch Times in front of the Chinese Consulate in Sydney, Australia and told the story of their family’s suffering and separation.

“In 1996, my mom was very lethargic because she suffered from some chronic conditions, one of which was uterine fibroids,” Liu Chunli recalled. “A neighbor introduced her to the practice of Falun Gong.” Falun Gong, also known as Falun Dafa, is a spiritual practice that includes doing slow-motion, meditative exercises.

“Soon after learning, my mom became a completely different person and all her health problems disappeared,” Liu said. “Having witnessed her amazing transformation and recovery, my whole family started to practice Falun Gong.”

“After studying the teachings of Falun Gong my husband was recognized as one of the top ten pacesetters in the electric and power industry in Shaanxi Province.” Liu said. “Following the guiding principles of Falun Gong—truthfulness, compassion, and tolerance—he became a model worker for his whole plant. He was never greedy, and never took advantage of people.

“All of the new graduates allocated to the factory each year requested to be assigned to his unit. Inspired by him, many people there also started practicing Falun Gong. That was the happiest time for our family. We all studied the teachings of Falun Gong, practiced the exercises, and introduced Falun Gong to others. Our family environment was very harmonious.”

In 1999, the Chinese Communist Party (CCP) began persecuting Falun Gong practitioners. Since then, Liu’s family has lived in turmoil.

“My husband went to Beijing to appeal for Falun Gong,” Liu said. “He was arrested and illegally detained for three months. He refused to attend brainwashing classes in 2001 and was then sentenced for one and half years to a labor camp.

“Two months after he returned home, the police came, attempting to force him to go to a brainwashing class again. In order to avoid abduction on that evening, he jumped out of a third floor window in our home.

“Later I learned that in his attempt to escape the police, he had walked 30 kilometers [18.6 miles], even though he had injured his abdomen and ankle from the jump. After walking all night, his legs and feet became swollen and turned black. He never returned home.”

Jia Hua wandered for six years, separated from his family. The family was then briefly reunited—at Weinan Prison, where Jia Hua is currently being held.

“My son looked at my husband’s grey hair; he didn’t even know how to talk to him. Except for eating, using the restroom, and sleeping, my husband sits on a little stool all day. He is not allowed to speak with other Falun Gong practitioners at all. There are four to five criminals given the task of monitoring him, and he has also been forced to endure brainwashing,” said Liu Chunli.

Jia Mingzhen is 15 years old now. When talking about his father, his memory is hazy, at best. “When I was three and half years old, my dad was forced to leave home,” Jia said. “It was six years before I saw him again. I didn’t even know how to call him ‘Dad.’”

Jia’s childhood has been different from many other children. In elementary school, a teacher who knew his situation always abused him verbally and punished him unjustly.

For example, other students were only scolded for not finishing homework, but Jia was forced to endure the public humiliation of lying on his stomach or kneeling in front of the teacher’s podium to finish his homework.

His mother explained, “The father of this teacher was directly involved with persecuting the people at his factory workplace who were practitioners of Falun Gong. His family also knew our family practiced Falun Gong and that Jia’s dad had been arrested for it.”

At school, some students would bully Jia. When recalling the sad experience, Jia didn’t dwell on the pain he felt, but said that he was convinced that these students were deserving of his pity.

“They would do such things to me because they didn’t understand the true situation or what Falun Gong really is,” Jia said. “I believed that if they were to come to understand it, they would actually help me.”

When faced with the humiliation at school, Jia didn’t argue with his fellow students. Instead, he chose to tell them about Falun Gong, explaining that practitioners are just trying to be good people. Some understood and changed their attitude; some even became friends with him.

What now exists in Jia Mingzhen’s memory is his father’s tired body and grey hair. Because the prison visit was monitored, they couldn’t speak freely.

Although he had prepared a piece of moon cake and a card for his visit with his father in prison, it was a hollow celebration. He continues to hold onto the hope that one day he will be able to celebrate properly the Mid-Autumn Festival with both of his parents.

Liu Chunli and Jia Mingzhen pointed out that their family’s experience is comparable to the experiences of tens of thousands of Falun Gong practitioners’ families across China who are also being persecuted.

This mother and son said they are very fortunate to have the opportunity to come to Australia—a free country. They often tell others about the persecution of Falun Gong, hoping that through their family’s tribulations, other people will understand more about how the CCP oppresses, tortures, and kills Falun Gong practitioners for their beliefs.

When they speak to others, they demand the CCP stop the persecution and release all of the illegally arrested Falun Gong practitioners in China.

Translated by Olivia Li. Written in English by Barbara Gay.