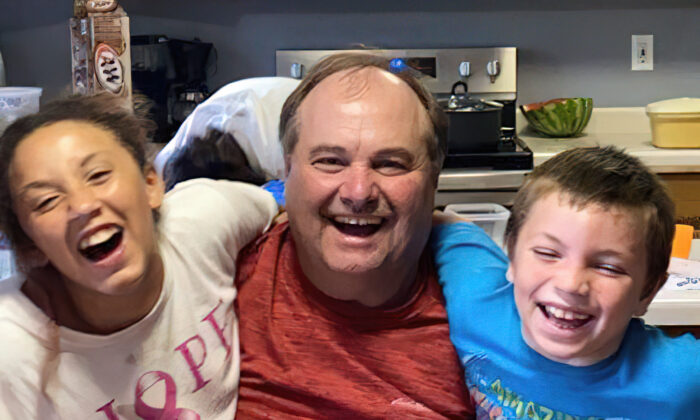 John Zingsheim of Hartford, Wis., with his children Courtney and Mitchell, who are now 21 and 19. Zingsheim is on a ventilator at Aurora Medical Center Summit while his family seeks a court order to allow treatment with the drug ivermectin. (Courtesy Zingsheim Family)
US Features

When John Zingsheim walked into the Aurora Medical Center in his hometown of Hartford, Wisconsin, he had no way of knowing his soon-to-be-diagnosed COVID-19 case would thrust his family into the headlines and leave his life hanging in the balance while attorneys argued over ivermectin, the treatment he requested before being placed on a ventilator.

Nearly two months after being intubated, Zingsheim, 60, is hanging on—still waiting for a resolution to allow his doctor to administer treatments of ivermectin, an FDA-approved medication often used to treat parasitic infections, which more recently has been hailed in some quarters as an effective treatment for COVID-19. The two-month legal battle has left Zingsheim’s two children exasperated while their father fights for his life.

“At this point, I would say we’re most likely on God’s time, as opposed to anyone else’s,” Karen Mueller, chief counsel at the Amos Center for Justice and Liberty, who represents Zingsheim, told The Epoch Times. “It’s just a miracle.”

Mueller thought she had a solution in mid-October, when Waukesha County Circuit Court Judge Lloyd V. Carter issued an order to show cause that would have allowed Zingsheim to receive the ivermectin treatments prescribed by his personal physician. On the motion of Aurora Medical Center, a three-judge panel of the Wisconsin Court of Appeals for District 2 agreed to take the case. Then, without being asked to do so, the appeals court stayed Carter’s order. The legal term for such a move is sua sponte, meaning of one’s own accord. The appeals judges were Mark Gundrum, Lisa Neubauer, and Paul Reilly.

“They stayed the circuit court’s order, which is why John Zingsheim never got the ivermectin,” said Mueller, who is representing Zingsheim pro-bono. “They didn’t just take it [the case], they stopped him from getting help. That’s when I decided to do the bypass to the Supreme Court. They refused to even overturn the stay of the appellate court. Again John was denied the ivermectin.

“Now, what we are looking at is back at the appellate court and we are in briefing right now. Expedited, but expedited is still too slow when you’re dealing with someone’s life.”

The Wisconsin Supreme Court, on a 4–3 vote on Oct. 25, refused to allow the case to bypass the Court of Appeals, a decision that drew a sharp dissent from Justice Rebecca Bradley.

“Wisconsin judges are rarely asked to make life-or-death decisions. This case presents one of those rare circumstances,” Bradley wrote in a dissent joined by Chief Justice Annette Ziegler and Justice Patience Roggensack.

“The circuit court made a decision on the side of life. The appellate courts chose the irrevocable and irreversible alternative. But nothing in the law compelled it.

“Judicial decisions have consequences,” Bradley wrote. “While every judicial decision must be well-grounded in the law, in this case, nothing in the law supports the court of appeals decision nor compels this court’s inaction. The likely consequence of those unreasoned decisions is irrevocable, irreversible, and grave harm inflicted on Mr. Zingsheim.”

Ivermectin was approved for human use in 1987 and prescribed more than 4 billion times since to treat such ailments as river blindness, a parasitic infection common in the tropics. Two scientists who discovered the drug were awarded the 2015 Nobel Prize in Physiology or Medicine.

While it’s on the World Health Organization’s list of essential medicines for several illnesses, the WHO recommends it only be used to treat COVID-19 within the scope of a clinical trial. However, cross-label use of ivermectin to treat other illnesses is legal. Refusal-to-treat cases involving ivermectin and COVID-19 are on the rise. Some patients have recovered after receiving court-ordered ivermectin treatments.

According to a database of 48 peer-reviewed studies on the effectiveness of ivermectin for the treatment of COVID-19, patients who were administered the drug for early treatment were 70 percent more likely to have their condition improve.

Sen. Ron Johnson (R-Wis.) called the loss of freedom during the pandemic a “travesty.”

“When did hospital patients lose all rights?” Johnson told The Epoch Times. “I continue to pray for John Zingsheim and his family. Americans shouldn’t be dying in hospital beds unable to get access to treatment that could potentially save their lives. We should listen with an open mind to doctors who have had the courage and compassion to actually treat COVID-19 patients.”

Zingsheim’s initial lawsuit was filed almost a year to the day after the funeral of his wife, Stephanne Zingsheim. Her death, at the age of 56, came after a long battle with cancer. The strain of that tragedy for John and Stephanne’s two children, Courtney and Mitchell, is now compounded as their father’s life hangs in the balance, according to Allen Gahl, Zingsheim’s nephew and health care power of attorney.

Some of the strain was lessened when Zingsheim chose Gahl to be his medical advocate just a few days after being hospitalized in mid-September.

“It seemed natural. There was a trust there,” Gahl told The Epoch Times. “He actually was able to make his own decisions for a few weeks there, so I just helped a lot.”

Gahl drew some conclusions fairly quickly after being given power of attorney. His uncle had been moved from Hartford to Aurora’s facility in Summit, about 30 miles west of Milwaukee. One conclusion was that two of the medications prescribed by the hospital—remdesivir and baricitinib—were too dangerous. The remdesivir was stopped after two days. Gahl said he didn’t realize his uncle was on the baricitinib for about two weeks, but then he asked that it also be stopped.

Gahl consulted various experts, including those at the Frontline COVID-19 Critical Care (FLCCC) Alliance, a group of doctors who develop what they describe as “effective treatment protocols to prevent the transmission of COVID-19 and to improve the outcomes for patients ill with the disease.” Suggested treatment protocols from the FLCCC Alliance were provided to Aurora hospital doctors, Gahl said.

“At least they knew then, but they weren’t willing to do a lot of it,” said Gahl, who lives near the Twin Cities of Minnesota. “What they were willing to do, it would be in very low dosage. I will say they did some of what we asked for, but it was so low dosage it would be, I’m not even talking about a half, it’s a fifth, a 10th, a 20th of what they’re looking for for a patient who’s so severe. That was very frustrating.”

In court filings, Aurora lawyers said the hospital’s doctors felt ivermectin falls below the hospital’s standard of care, and argued that a circuit court doesn’t have the authority to compel a hospital to provide what it considers substandard. Katie McDonough, director of public affairs for Advocate Aurora Health, told The Epoch Times that Aurora stands by the decisions of its doctors.

“Our hearts go out to this patient and their family during this difficult time,” McDonough wrote in a statement. “As always, the health and safety of our patients is our top priority. In keeping with evidence-based prescribing practices and guidance from the FDA and CDC, we do not support or recommend the administration of ivermectin for treatment of COVID-19. We stand with our care team in recommending other proven courses of treatment which have worked safely and effectively for thousands of patients, and are awaiting a decision from the Court of Appeals on the case.”

Mueller said Aurora presented evidence in court that mocked ivermectin as “horse paste,” noting its veterinary use to control parasites in animals.

“I said, first of all, your honor, it is not our job to prove that it is safe, it’s their job to prove that it’s unsafe, and they can’t point to even one death that ivermectin has caused, because it’s got a 40-year history of being a safe drug for other purposes. It is an anti-parasitic, but more recently, they’ve found it’s also a very strong antiviral and anti-inflammatory, and it works right on the lungs that have been ravaged by the COVID pneumonia.”

In 2018, then-Gov. Scott Walker signed legislation that established the right to try for terminally ill patients in Wisconsin who want access to experimental drugs that haven’t gained final approval from the U.S. Food and Drug Administration. The law didn’t address a situation such as Zingsheim’s, which involves an approved drug already in use by many doctors as a “cross-label” treatment. A spokesman for state Rep. Timothy Ramthun, a Republican, said a bill will be introduced to update the right-to-try statute. Ramthun is seeking state Senate co-sponsors for the bill.

Mueller said Zingsheim’s case isn’t unique, as she fields regular calls from around Wisconsin and the nation.

“I got another call from a gal in Indiana today,” Mueller said. “Same story. They’re not finding anybody to help them. They’re finding no legal help, and they’re calling me.”

Mueller said it’s a challenge to find a doctor willing to prescribe ivermectin, because they fear reprisals from state licensing authorities.

The Wisconsin Department of Safety and Professional Services—which licenses physicians and pharmacists—didn’t respond to a request for comment.

Sen. Johnson agreed that medical professionals have been threatened across the country.

“Unfortunately, many physicians have had their jobs and medical licenses threatened for using off-label prescribing rights to treat COVID-19,” he said. “Hospitals and pharmacies have restricted access to certain treatments. I wrote a letter to Dr. [Francis] Collins [National Institutes of Health director] in January of 2021 on the urgency of Americans having access to early outpatient treatment options for COVID-19. He has not given the information requested. Dr. [Anthony] Fauci, Dr. Collins, and our federal health agencies have ignored and sabotaged early treatments for COVID-19. These actions have and will continue to cost lives.”

Gahl said it’s nothing short of a miracle that his uncle is still holding his own after fighting the effects of COVID-19 for nearly three months.

One of the toughest parts of the experience, Gahl said, was having an agreement worked out in the circuit court and seeing that taken away by the appellate court.

“I thought we were right there. We were ready to have a settlement,” Gahl said. “The doctor was going to get in the car and go. Then boom, the appellate court does what they did.”