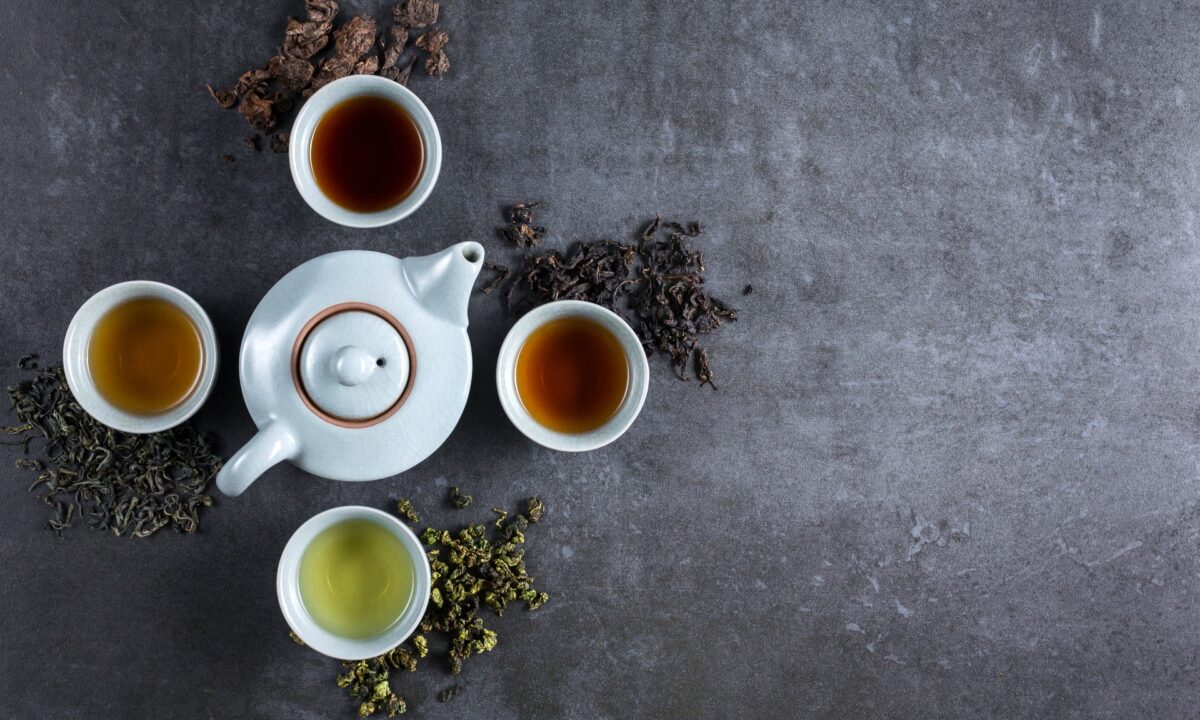 There are six categories of “true” tea are generally recognized, but hundreds of types of tea, each with their own characteristics and best method of preparation. (shutterstock/Ivanfirst)
Food

A Journey Into the World of Tea

“Tea tempers the spirits and harmonizes the mind, dispels lassitude and relieves fatigue, awakens thought and prevents drowsiness, lightens or refreshes the body, and clears the perceptive faculties.” —Lu Yu, “The Classic of Tea”

Tea has long been one of the most popular drinks in the world. According to World Tea News, tea ranks second only to water in popularity. An incredible 25,000 cups of tea are consumed every second around the globe, equating to 2.16 billion cups per day!

Tea is an ancient drink, and one that has been written about extensively. “The Classic of Tea,” or “Ch’a Ching,” regarded as the quintessential book on tea, is believed to be the first text on the subject.

Written by Buddhist monk Lu Yu during China’s Tang Dynasty, “The Classic of Tea” helped give rise to tea’s popularity in China. It details every aspect of tea, from growing and manufacturing to the wisdom and art of tea drinking.

While Lu is known as the Sage of Tea, it is Emperor Shen Nong who is credited with discovering tea approximately 5,000 years ago.

According to legend, Shen Nong was 1 of 3 deified emperors in ancient China. Born in the 28th century B.C., it’s said that his mother was a princess, and his father a heavenly dragon.

Known as the father of Chinese medicine, Shen Nong was said to be imbued with divine abilities. To ease people’s suffering, he wandered the country in search of various plants and berries to determine their effects in curing ailments. Legend has it that Shen Nong had a transparent stomach, and could directly see a plant’s effect on his body as he tested it.

One day, while boiling a pot of drinking water, a few unidentified leaves blew into his pot. Being a keen herbalist, Shen Nong tasted the brew, felt invigorated, and the beverage of tea was fortuitously born.

Originally used for its medicinal properties, tea was said to improve digestive issues, depression, fatigue, and more. Shen Nong is said to have used tea as an antidote some 85 times, after inadvertently poisoning himself while testing various herbs.

Tea was first recorded as an everyday beverage during the Tang Dynasty (618–906 A.D.). Tea drinking started with Buddhist monks, who used it in ceremonies and rituals, and quickly spread to the general population.

It was during this “Golden Age” that tea culture was born. Tea became China’s national drink, and the ritual of preparing and drinking tea was elevated to an art form. Tea drinking required a special environment, mindset, utensils, and teaware. It was a near-spiritual experience, one in which man harmonized with heaven, earth, and the universe.

By the Ming Dynasty in the mid-1300s, a luxury tea market had developed. Tea became a status symbol, with the best teas reserved for the elites. Tea connoisseurs touted tea’s nuanced qualities and subtle differences, while scholars extolled its ability to clear and focus the mind. In fact, many poems were written about tea, and many paintings inspired by it.

Tea Around the World

Tea stayed within the borders of China for its first 3,000 years of existence. It wasn’t until 805 A.D. that the migration of tea began.

It was a Buddhist monk from Japan who first carried seeds for tea cultivation home. Tea was initially consumed in monasteries, and eventually spread throughout society, growing to a level of popularity that rivaled that in China.

Tea then migrated throughout the rest of Asia and the Middle East, finally arriving in Russia and Europe in the 1600s. Portuguese merchants were the first Europeans to bring tea home with them, while the Dutch were the first to import it from China. By the 1700s, tea had become the most popular drink in Britain, while in India, though tea plants were indigenous to the area, tea didn’t become part of the Indian diet until the British began producing it there in the mid-1800s.

Tea made its way to America with the colonists. It was the British East India Company’s high taxation on tea that led to the Boston Tea Party, which was the principal act that led to the Revolutionary War. This marked the end of America’s love affair with tea for many years.

Tea has long been honored with ceremony. In China, the ceremony of Cha Dao, or the Way of Tea, developed during the Tang Dynasty. The ceremony draws from Buddhism and Taoism, and involves six major aspects: attitude, tea selection, water selection, teaware selection, ambiance, and technique.

In Japan, the ceremony of Chanoyu is an elegant and intimate interaction between the host, guests, tea, and utensils, honoring the elements of “harmony, purity, respect, and tranquility.”

England is nearly synonymous with afternoon tea (also called low tea for the table height). The tradition is credited to Anna, Duchess of Bedford, who began taking tea with a light snack around 4 p.m. in the 1840s. High tea (taken at a high table) originated with the working class, and consists of a full meal and pot of tea around 5 to 6 p.m.

America has played an important role in the modern history of tea, popularizing iced tea in the heat of the 1904 World’s Fair in St. Louis, and inventing the tea bag around 1908.

How Tea Is Made

Tea aficionados may be surprised to learn that all tea (which doesn’t include herbal teas or tisanes) comes from just one plant—the Camellia Sinensis bush. While visiting the Charleston Tea Garden in South Carolina last summer, I discovered that it is the way tea leaves are processed that creates different types of teas.

The quality and flavor of tea, much like wine, is affected by the environment in which it’s grown. Tea plants typically do best in higher elevations, with generous rainfall, and acidic, mineral-rich soil. And while tea is grown in more than 30 countries, the majority comes from just a few places: China, India, Sri Lanka, Kenya, and Indonesia.

Tea is one of few crops still harvested primarily by hand. Hand-picking protects the delicate leaves from bruising and allows only the best leaves to be used in the tea-making process. While machines are sometimes used today, they produce a far inferior product.

Though there are hundreds of types of tea, only six categories of “true” tea are generally recognized: white, green, oolong (pronounced wu-long), black (known as red in China), and the lesser-known yellow and pu-erh (pronounced pooh-ur). Tea blends and herbal teas, which are made from flowers, roots, plant leaves, or barks, make up the rest, and are considered “infusions” or tisanes.

The orthodox tea process begins with leaves being dried in a well-aerated 12-to-18-hour process called withering. Withering removes about 50 to 60 percent of the leaf’s water content, making it softer and more suitable to the rolling process.

It is oxidation that creates different types of tea. Basically, green tea isn’t oxidized, white tea is oxidized approximately 1 to 10 percent, oolong tea is oxidized 10 to 85 percent, and black tea is oxidized 100 percent. Yellow tea is processed similarly to green tea, but includes a step in which leaves sit while damp, causing slight oxidation, while pu-erh is fermented with microbes such as yeast.

Tea has been valued for thousands of years in the East for its health benefits, and the West is finally beginning to recognize these as well.

Black tea helps protect against stroke and cigarette smoke damaging the lungs, while white tea has some of the most potent anti-cancer properties. Oolong and pu-erh teas help lower bad cholesterol, while pu-erh tea may help prevent weight gain.

In traditional Chinese medicine (TCM), it’s said you can go a day without food, but not a day without tea. While not a common notion in Western medicine, TCM believes the body needs a balance between cooling and warming. Tea has the amazing ability to both warm and cool the body, bringing it back in balance.

Blemishes, for example, are an indication of too much internal heat, so a cooling tea, such as green or white, should be used. Poor digestion is an indication of the body being too cool, so a warming tea, such as black or pu-erh, is best. As a general rule, green tea is best in summer and black in winter, while green tea is best for the young and black for the elderly.

The choices for enjoying tea are many and varied. Options range from a tea bag in a cup of hot water, to buying a separate clay pot for each type of loose leaf tea, with the proper utensils and teaware. You could even create your own tea hut or room for enjoying tea in a relaxing environment.

Whatever your inclination, getting to know the qualities of teas is a good place to start.

White tea, one of the most sought after, is enjoyed by aficionados and novices alike. A delicate and minimally processed tea, it has a mild flavor with fruity, floral undertones. As such, white tea is a good option for the tea novice. According to Sencha Tea Bar, two of the most popular varieties are silver needle and white peony.

Green tea, which is typically pan-fired in the traditional Chinese method, has a roasted, nutty flavor, while Japanese matcha teas, which are produced by grinding green tea leaves into a fine powder, have an herbaceous flavor, with a slight bitterness and sweet aftertaste.

Oolong tea has a floral flavor with a smooth finish. Less-oxidized oolong teas tend to have more floral tones, while the more oxidized varieties have a strong, malty flavor.

Black tea accounts for 75 percent of tea consumption globally. Flavors vary, depending on the region and variety of tea bush. Ceylon tea, grown in Sri Lanka, has notes of chocolate, spice, and citrus, while Chinese black tea has a strong, astringent flavor. The Indian tea Assam has a malty, earthy flavor, while Darjeeling has a floral, fruity flavor.

The lesser-known pu-erh tea, popular in China, and yellow tea, have qualities similar to black and green teas, respectively.

To experience different teas, check your local tea shop or the internet. Seven Cups directly imports traditional, handmade teas from China, while Tea Forté, Palais Des Thes, Art of Tea, Teavivre, Red Blossom Tea, and Adagio sell varieties from around the world, as well as teaware. You can also try a new tea each month by joining a tea subscription club, take online tea classes, or even train to become a tea sommelier.

While I’ve always enjoyed tea, I’d never realized how extensive the world of tea is. It’s been a journey of discovery for me, and I hope one for you as well.

If you’ve never given tea a chance, I hope you will, and if you knew a little about tea before, I hope you’re inspired to explore it further.

Tatiana Denning, D.O. is a preventive family medicine physician and owner of Simpura Weight Loss and Wellness. She believes in empowering her patients with the knowledge and skills necessary to maintain and improve their own health through weight management, healthy habits, and disease prevention.