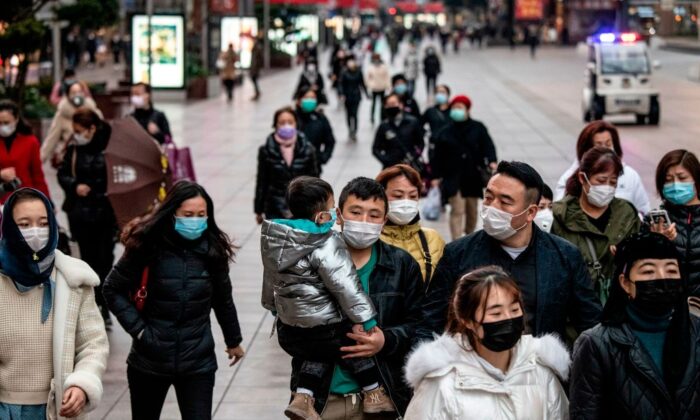 People wearing protective facemasks walk along a street in Shanghai on Feb. 21, 2020. (Noel Celis/AFP via Getty Images)
Thinking About China

A Glimmer of Hope in China: The ‘Lying Flat’ Counterculture

After an anti-China stabbing of a Hong Kong policeman late on July 1, the 100th anniversary of the Chinese Communist Party (CCP), and the 24th anniversary of the handover of Hong Kong to China, Hongkongers and the world are in need of a little positive energy. The stabbing caused debate between nonviolence and violence advocates on how Hong Kong should respond to China’s increasing repression in the city. After taking part in that debate, I believe that some Hongkongers need a little nonviolent inspiration.

Such inspiration could come from the “lying flat” movement in China. Chinese citizens have been dealing with the CCP longer than have the rest of us, and what they evolved can form part (not all) of our collective response. Lying flat seems to be the biggest internal threat to the CCP these days, it could do wonders in other autocracies as well, and so it deserves a moment of our attention.

Mr. Luo Huazhong, the original “Master of Lying Down,” started the movement by posting a photo of himself lying somewhat flat in his modest Sichuan Province bed, along with a revolutionary idea for China. Mr. Luo wants out of the rat race and he believes that “lying flat is justice.” Mr. Luo called the action of lying down his “sophistic movement,” in reference to the Greek philosopher Diogenes, who lived in a barrel and begged for his food, while reputedly thumbing his nose at Alexander the Great.

The movement was therefore explicitly political and philosophical from the beginning, which likely explains its popularity. Other young people in China quickly followed Mr. Luo’s lead, with 9,000 members joining within a few weeks and spawning a Chinese “tangping” (躺平) counterculture that now includes music videos, the sale of “lying flat” accessories, and numerous photos of cats and seals who are—you guessed it—lying flat.

Tangpingers rebel by avoiding anything that requires a lot of time or money, including marriage, children, and house purchases. They live at their parents’ houses, and bicycle instead of drive. They refuse overtime at work, or quit their jobs altogether. They’re against “996,” which is shorthand for working 9 a.m. to 9 p.m., six days a week. That’s standard practice in China.

Tangping is a good way to resist the CCP in a society where any other type of resistance is difficult. Every yuan that tangpingers don’t earn is a yuan that the regime can’t tax. The less money the regime has, the less it can spend on the military.

“Some compare [tangpingers] to the 1950s Beat Generation in the United States. Others call their behavior a form of nonviolent resistance or ‘ideological emancipation’ from consumerism. Supporters portray it as a rejection of struggle and endless striving,” according to Lily Kuo at the Washington Post. One tangpinger quoted in the Post said the movement is “an expression of our demands from society. We want systems to be better and for workers to get more protection.”

Critics call tangpingers “shameful” and “defeatist.” The regime is catching on to tangping’s subtle form of resistance, censoring any mention of it, and shuttering its social media groups. If the movement spreads to a greater degree, leading tangpingers will doubtless be arrested. They don’t care about their jobs, so threatening to fire them is of little use in deterring the movement.

Who knew that lying down could be so revolutionary?

Tangping is an inspiring and innovative example of nonviolent resistance, and a “weapon of the weak” as described by Yale professor James Scott. It is a worthy Chinese form of the kind of resistance detailed by nonviolence theorists like Mohandas Gandhi, Gene Sharp, and Martin Luther King. They, along with tangpingers, should be required reading for anyone living under a dictatorship today.