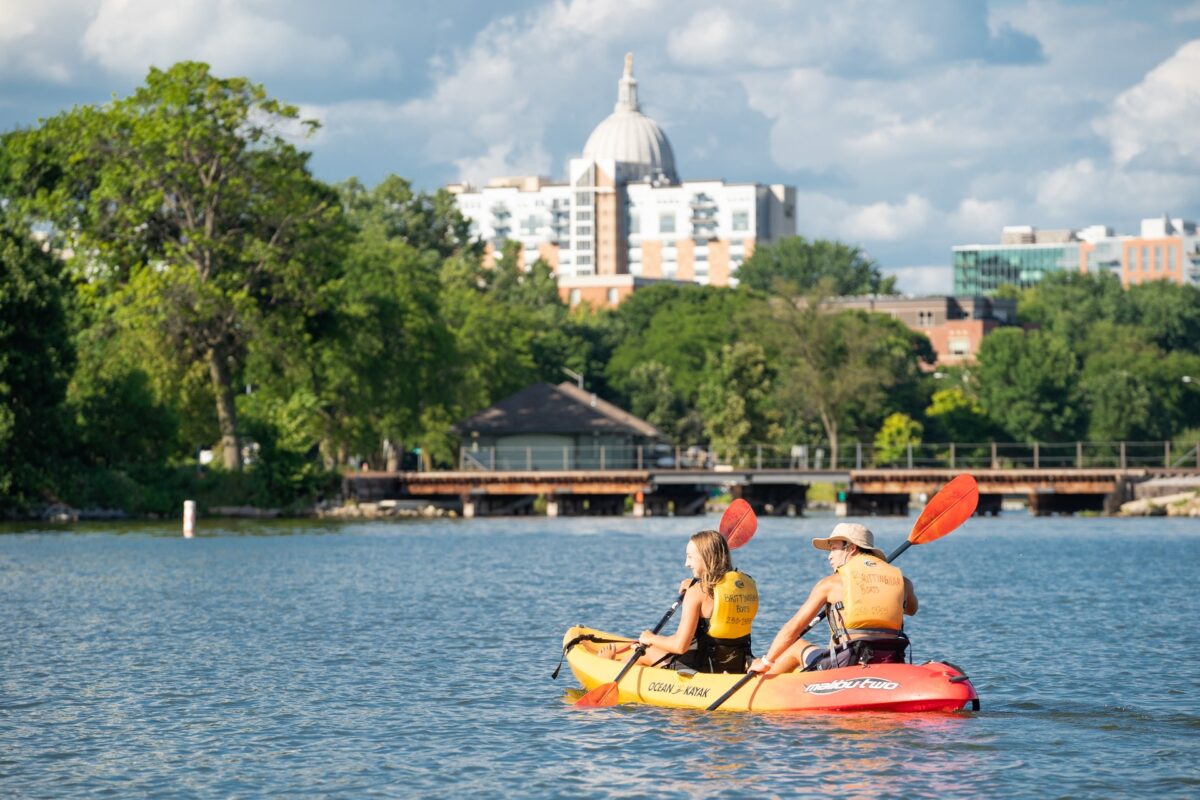 Purse strings may be tight this summer, and as airlines struggle to keep up with the surge in travel interest, choosing trips closer to home or within driving distance is perhaps the better way to go. How about a vacation in a city that for the second year in a row takes the number one spot on Livability.com’s “100 Best Places to Live in the US”? Madison, Wisconsin, could be your next budget-friendly destination.

As far as settings go, Madison is pretty hard to beat: A chill university town with two beautiful lakes on either side of a downtown isthmus where a D.C.-style state capitol sits atop a modest central hill visible for miles around. This is a particularly green city, with well-developed park and trail systems and a 1,200-acre forest and spring-fed lake right in town. And the surrounding countryside balances rich agriculture with land preservation amid the fascinating terrain left behind after the last advance of glaciers.

But for me a visit begins at the heart of Madison: the Memorial Union Terrace at the University of Wisconsin. A place to gather lakeside for a beer and a brat, for a free live concert in the evening, for a scoop or three of the university’s own ice cream, or for one of the magnificent sunsets over Lake Mendota. Then walk the seven blocks through the shops and cafes of State Street to the Capitol.

Every Saturday morning, the Dane County Farmers’ Market—the largest provider-only market in the nation—sets up on the wide walk around the Capitol Square, showcasing fresh produce and baked goods, artisan cheeses, preserves, meats, flowers, honey, and maple syrup, you name it. Amish baked goods, spicy cheese bread, samples of Finnish-style “bread cheese,” or a hot sauce you didn’t know you needed. Everything is local and everything is sold by its maker rather than a wholesale buyer.

Go into the Capitol and sign up for one of the hourly free guided tours, or walk through on your own, making sure you climb all the way to the observation deck for views of the city and its lakes in all directions.

The gorgeous butterfly-mecca that is Olbrich Botanical Gardens and a golden Thai pavilion? Admissions to the gardens is free. Henry Vilas Zoo? Also free. The Arboretum? Same. So you love art? Great, be sure to hit the University’s Chazen Art Museum. This museum plus Wisconsin Historical Museum and Wisconsin Veteran’s Museum, or most of the summer fests and public concert series? All free admission. (Of course, donations are always welcomed and appreciated.)

Summer music begins with Concerts on the Square, the Wisconsin Chamber Orchestra’s free weekly performances on the Capitol lawn, and continues into August with Concerts on the Rooftop at the Frank Lloyd Wright-inspired Monona Terrace & Convention Center, with its clear views of the Capitol and Lake Monona. Many neighborhood fests draw large crowds for impressive free entertainment lineups as well: Atwood Fest, Willy Street Fair, La Fête de Marquette, Orton Park Festival, and so much more.

Until Madison, I hadn’t ever seen an interchange overpass with on-ramps and a traffic circle… on a bike path. The Veloround is the intersection of four trails and a short connection to a fifth. Three are state trails, four are primarily converted rail beds. All of them offer beautiful rides right through downtown, along the lakes and rivers, or out into pastoral scenery.

Many more miles of pathways, dedicated bike lanes, and bike boxes at intersections make Madison highly navigable on two wheels, and Madison BCycle with its 40-plus stations and real-time app means an easy e-bike rental if you choose not to hit up one of several bicycle stores that rent bikes—from touring and tandem to mountain and fat-tire.

Madison lies along the 1,000-plus-mile Ice Age National Scenic Trail, so if places like the Arboretum, or several other city parks don’t grab you, miles of rustic footpath along the edges of where the glaciers stopped will do just nicely. Pick up “60 Hikes With 60 Miles of Madison” for more ideas than you can cover in a week.

Stereotypes, right? And yet, not inaccurate. Within a 20-mile radius of the Capitol are more than two dozen breweries, almost another dozen distilleries, plus mead makers, wineries, and cider producers. And don’t even get started on the craft beer bars and the hole-in-the-wall taverns. Even the Terrace and Rathskeller at the University has a notable tap list, and Olbrich Biergarten and the nearby Tiki Bar are pleasant outdoor spaces along Lake Monona. (If you’ve heard of the Wisconsin-only New Glarus Brewing and their Spotted Cow beer, you should know that’s a 40-minute drive southwest of town into the hills of the Driftless Area and cheese maker country, one of countless day trips options.)

Excellent cheeses of myriad styles are being made throughout the area, and if you don’t drive out to the actual creameries, then you can taste-tour most of them at Fromagination, a Capitol Square cheesemonger.

For a mid-sized city (population 260,000 but more than double that in the greater metro area), Madison has an impressive variety of restaurants. From upscale New American and classic supper clubs to Ethiopian and Peruvian. Even exploring the food cart scene (another contender for the nation’s top 10) could keep a person busy for a couple of weeks.

Whether it’s a burger made to order at The Caribou, mac n’ cheese pizza by the slice at Ian’s, or an order of little Russian dumplings at Paul’s Pel’meni, Madison offers a good variety of cheap eats (it’s a college town after all). But save a splurge for some impressive fine-dining at The Harvey House, L’Etoile, or Fairchild—as photogenic as it is delicious. And a supper-club experience at the Tornado Club Steak House or Toby’s is a must.

Nothing captures the traditional Wisconsin vibe better than the nod to the unofficial state cocktail: The Old Fashioned. The drink’s eponymous restaurant on the Square, with its neon beer signs and memorabilia, blends tavern and supper club with a menu that hits all the classics—from fish fry and prime rib Saturdays to supper club relish trays, bratwurst, and the best deep-fried cheese curds you’ll ever have. Fifty Wisconsin beers on tap and the namesake cocktail made with Korbel brandy are a draw in themselves.

The combo of great air and great fare is the vacation you need right now. Go get a double scoop or a pitcher, kick back, and watch the sun go down.

Getting There: Madison has its own regional airport (MSN), a 10-minute taxi ride from downtown, with nonstop flights from 14 major hubs, including New York, Denver, Phoenix, Atlanta, and Dallas. Direct buses also run from Chicago-O’Hare (ORD) and Milwaukee Mitchell (MKE) airports.