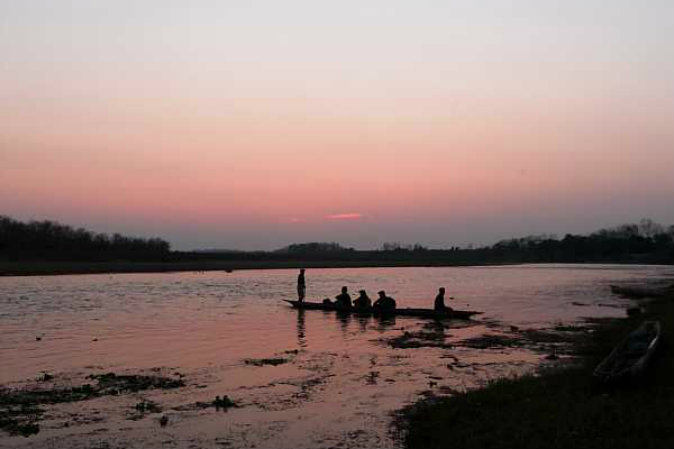 A Date With Wild Beasts in Nepal’s Chitwan National Park

For Valentine’s Day this year, I had a date with the wild beasts of Chitwan National Park, in Nepal. We set out early in the morning, amidst the fog, all packed up inside a narrow canoe with barely 2 inches of draft, getting wet once in a while when the small boat goes through some rapids. On the river banks, we see several species of birds feeding, hunting, flying around or just chillin’: cuckoos, kingfishers, flycatchers, geese, wild chickens, and many others I just can’t recall, limited I am in avian terminology.

But as interesting as bird watching is, I am more into large land animals, and the prospect of seeing some of those bad boys in their natural habitat is what made me detour to this national park, founded 40 years ago and getting the UNESCO World Heritage Site status about ten years later. It is located in the southern half of Nepal, culturally and geographically way more similar to parts of India than the insanely rugged north of the country. So no mountains, prayer flags and snow-capped peaks here, but rather jungles, grasslands, and big scary beasts, roaming around freely. Sounds fun.

There are several ways to proceed, ranging from mere one-hour excursions to multi-day jungle treks, by jeep, elephant, boat or on foot. Being both fond of exercise and on a cheap-ass budget, we choose the latter, and Chitwan being a pretty popular tourist attraction, it’s a buyer’s market when it comes time to find a good price and a competent guide.

As soon as we set foot on the land after the one-hour boat ride and stretch our numb legs, our guides give us the security guidelines and what we have to do should we encounter a hostile animal. Charging rhino? Climb a tree, and if it’s impossible, run in zigzags. Pissed-off sloth bear? Stay grouped, clap our hands, and make the most noise possible. Roaring tiger? Again, stay grouped, maintain eye contact, and make sure his escape route is not blocked. I listen attentively, as being trampled to marmalade or ending up as some orange and black striped monster’s lunch is not in my plans, but the guide calms us down by telling us that while scary animal stare-downs are far from uncommon in the wilderness of the park, they almost never result in bodily harm, if we follow his instructions that is.

Besides a bunch of spotted deer just bouncing around and tons of birds of all shapes and sizes, it takes a good hour before we see anything serious. At the edge separating the dense forest from a plain with two-meter tall grass, we suddenly hear the loudest cracking sounds ever. It sounded as if one of those huge demolition balls just swung across a frail wooden house, ripping it to splinters. The guide puts his index finger across his lips, then non-verbally invites us to walk in the direction of the noise, which we do, a bit apprehensively of course. Then, bang, 10 meters ahead, we see it: a huge rhino, the size of a delivery van, trotting through the fog perpendicularly to our route. It was so close I could see the whole outline of its body, proudly led by a single undersized horn. I stand there, mouth gaping, for a minute or so, high-fiving my travel buddy and wholeheartedly agreeing that everything from now is just gravy. Little we know, we’re just getting started…

Not much later, by a river, we stumble upon another rhino. This one is fast asleep, which allows us to get a bit of a longer view, and as we tip-toe towards it, every cracking sound makes its ears flap. In hindsight, it would have been pretty cool to just shout and wake it up, just to see what would happen, but standing there gazing at the humongous frame and the school desk-sized head glued on it, I am happy just watching. We let the gray monster catch his shuteye peacefully, and keep on going.

We keep on walking, covering a lot of distance through the grasslands and forests, occasionally stopping at an observation tower to rest our legs and try to see some beasts from above. I am quite astonished by the overall quietude of the place, and find it infinitely pleasant. I love walking, and I love being surrounded by nature, so I started this small journey with an optimistic mind, telling myself that even if we don’t spot any large animals the whole thing would have been very worthwhile.

The two guides are great, explaining a myriad of interesting things about the area’s culture, flora and fauna, interspersed with stories about their life and humorous anecdotes in excellent English. They make us pay attention to the prints in the mud, and I soon become a (self-proclaimed) expert at differenciating them, as well as the pile of faeces. Deer poop. Bear poop. Rhino poop, piled all over the place, as big as volleyballs. And tiger poop, suspiciously similar to ours. Not missing a single thing, one of the guide bends over where the earth was been vigorously scratched, picks up a wet leaf, sniffs it, and says “Tiger urine. And it’s very very fresh. Smell it!” I start questioning myself, wondering about the wisdom of just walking around a possibly very angry tiger’s habitat, before just telling myself “What the hell, Lonely Planet recommends that place… it can’t be that dangerous, now, right? Right?!”

Copyright © 2014 by Vagabond Journey Travel. This article was written by Felix Gervais and originally published on www.vagabondjourney.com