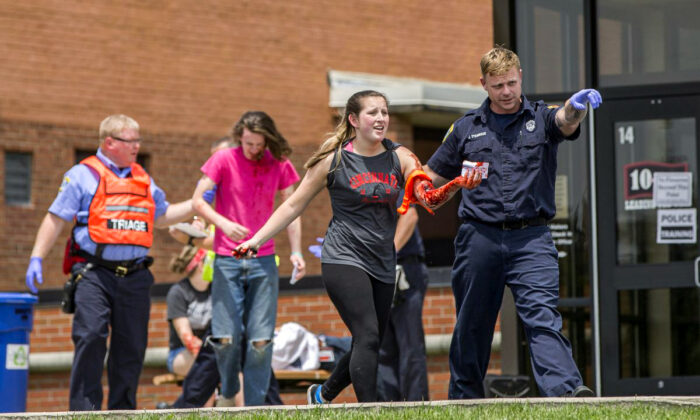 An emergency worker directs a volunteer with simulated injuries during a training exercise for an active shooter at Hopewell Elementary School, in West Chester, Ohio, on May 25, 2016. (AP Photo/John Minchillo)
Social Issues

A Call to Arms: Teachers in Conservative States Are Volunteering to Carry Guns

Crosses and flowers laid out in the public square of the grief-stricken town of Uvalde, Texas, where a teen gunman killed 19 students and two teachers, are an all-too-familiar scene igniting a call to arms for teachers in Texas and beyond.

The Republican-led Texas legislature is addressing the twin issues of school safety and mass violence following the May 24 Uvalde school shooting. Committees of lawmakers are reviewing past legislative efforts, such as the Guardian and Marshal programs that allow teachers to carry firearms in the hope of preventing mass shootings at schools. School officials and firearm instructors in the Lone Star State say interest has risen sharply since the recent shooting.

Jeff Sellers owns Schools on Target, a company in Marble Falls, Texas, that trains teachers to carry firearms in schools. Since the school shooting, He told The Epoch Times that he has added nine classes—double the number customarily held—for June through August.

“I’ve gotten an insane amount of calls,” Sellers said. “It hasn’t stopped. Ninety percent is because of Uvalde.”

“We’ve had about a 100 percent increase,” he said. “It’s been pretty dramatic. I’ve sent out over 20 proposals in the past week.”

Proctor said teachers want to protect their students and themselves, despite what people may be hearing from select voices in legacy media.

“What you’re seeing is a vocal minority,” Proctor said. Arming teachers isn’t about giving them something else to be responsible for—but instead giving them a tool as a last defense.

Elsewhere, state legislatures are investigating how to make schools safer and arm teachers.

Louisiana is currently looking at legislation similar to that of Texas, allowing teachers to carry guns in schools after receiving specialized training. Ohio’s latest bill aims to be less restrictive than the current law, which mandates 700 hours of police training and board approval before allowing teachers to be armed.

Republican governors Bill Lee of Tennessee and Ron DeSantis of Florida took action on school security this week. Lee signed an executive order on June 6 to ensure working safety protocols at schools, and to evaluate training for active shooter scenarios. DeSantis signed a school safety bill into law on June 7 that focuses on crisis intervention and training, and mental health awareness.

Meanwhile, teacher unions have nixed the idea and portrayed arming teachers as unpopular with educators. A 2018 Gallup poll found that 73 percent of teachers oppose the idea.

Meanwhile, policies to arm teachers in some form have widespread participation throughout the country amid the horror of gunmen targeting schools for mass shootings. The RAND Corporation reported in 2020 that 28 states permit armed teachers under some circumstances, while states such as Texas and Florida have passed laws encouraging the practice.

In North Florida, the principal at a private Christian school said he would like to see the program expanded to include private schools. The principal, who didn’t wish to be identified, said he added chain-link fencing around his school’s 40-acre perimeter and allowed just one-way traffic onto the campus, except during drop-off and pick-up times.

Cameras now monitor doors into buildings, and access is controlled remotely or with special key fobs. Classrooms stay locked throughout the day. But it’s not enough anymore, he said.

He asked for training under Florida’s school guardian program to protect his school’s 340 students, ranging from toddlers to high school seniors. He was denied because the program doesn’t extend to private schools.

Currently, it’s open to employees of public schools or charter schools who volunteer to serve as guardians and their official job duties. To qualify, they must pass psychological and drug screenings, and complete a 144-hour training course.

Sheriff’s offices in 45 of Florida’s 67 counties participate and receive funding to cover screening and training costs. And guardians receive a one-time bonus of $500 for serving in the program. Schools in districts can arrange to send employees for certification.

So the principal is now training on his own to become a licensed, armed security guard.

“It’s the only option,” he said. “Even before this last school shooting, I said, ‘I’ve got to go get this taken care of.’ So we’re doing it the right way.”

About a decade ago, Texas lawmakers created the school Marshal program, as a way for educators to carry weapons inside schools, and later initiated the Guardian program.

Under the Marshal program, school employees can carry a handgun on school premises after 80 hours of training. However, school marshals are restricted from carrying concealed firearms if they’re regularly in contact with students. Instead, the marshal can store a gun in a safe at the school. There are 62 school districts participating in this plan, according to the Texas Commission on Law Enforcement.

Gretchen Grigsby, director of government relations with the Texas Commission on Law Enforcement, told The Epoch Times that 30 individuals and nine new school districts have signed up for the Marshal program since the Uvalde shooting.

The Guardian program authorizes school boards to arm employees under the federal Gun-Free School Zones Act and the Texas Penal Code. After completing 16 hours of training, those employees may carry a concealed firearm in the presence of students. According to the Texas Association of School Boards, 389 districts reported using the Guardian plan as of May.

While Democrats are calling for gun control, people such as Sellers reiterate that the only thing that can stop a bad guy with a gun is a good guy with a gun. He told The Epoch Times that the first few minutes of an active shooter situation are critical, and arming teachers could save lives.

“In active shooting incidents, time is everything,” Sellers said. “No gun control law is going to stop evil from conducting evil acts.”

Madalyn Maresh is an assistant superintendent at the Edna Independent School District, a rural 3A district northeast of Victoria, Texas. She told The Epoch Times that her district reopened the application process for the Guardian program at her school in response to the Uvalde shooting.

“The day I reopened it, I got two applications immediately,” she said. In the three years since the program became operational, she gets between three to 10 volunteers per year. Without guns for protection, teachers are forced to use their own bodies to shield students from an active shooter, she said.

“You’ve got to find what fits your community. We got zero pushback on it—our community embraces it,” Maresh said.

Nanette Holt contributed to this report.