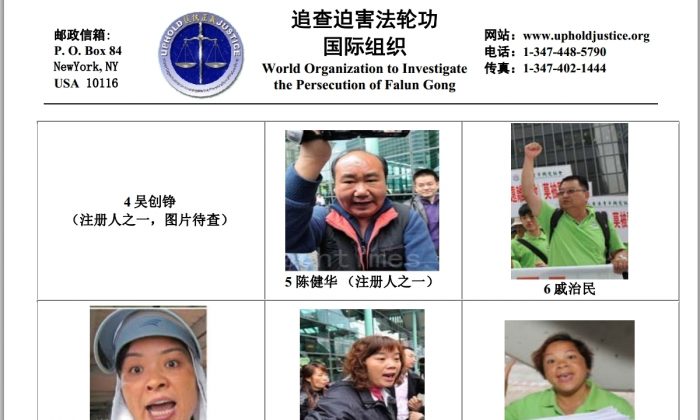 A screenshot from the document released by the World Organization to Investigate the Persecution of Falun Gong, calling for information about the members of the Hong Kong Youth Care Association, accused of being a Chinese Communist Party front group operating in Hong Kong. (Screenshot/Epoch Times)
China

A Call for Information on Hong Kong Front Group

The members of the Hong Kong Youth Care Association, judging by their mug shots, aren’t the sort of folks you’d like to bump into in a dark alley. A new document calling for information about the group shows them with snarling countenances, pumping fists, and faces set with leering taunts. In some photos they have whistles or little plastic bugles in their mouths, instruments used to distract and annoy practitioners of Falun Gong, a spiritual discipline, and the group’s daily quarry in Hong Kong.

Since the summer of 2012 the Youth Care Association has roamed the streets of Hong Kong haranguing Falun Gong groups and hanging propaganda posters attacking the practice. Their activities have gone largely unchecked by the police, but have increasingly become a point of frustration for ordinary Hong Kong people. The media in Hong Kong has focused recently on the outburst of a school teacher, named Lam Wai Sze, to police on July 14, who failed to do anything as HKYCA members blocked off a Falun Gong protest with their large banners in the streets of Mong Kok, a bustling shopping district.

Now, an overseas Chinese investigation and activist group is attempting to do a public naming and shaming of all the individual HKYCA members they can identify. The World Organization to Investigate the Persecution of Falun Gong specializes in in-depth research from the Chinese Internet, and sometimes creative phone calls with Chinese officials, to understand and map how the persecution of Falun Gong is organized and conducted in China.

Given that the HKYCA functions as an extension of that campaign in Hong Kong–a reporter with Hong Kong’s Next Magazine discovered that the group shares the same staff and building in Shenzhen with the 610 Office, the extralegal Party agency set up to oversee the anti-Falun Gong campaign–the World Organization has now put out a call for information about them.

In the document, six of the members are named, while another 71 of them simply have their sometimes unflattering pictures put on display.

WOIPFG calls for the public to send in the “first names, last names, family history, business background, sources of income, and connections in the mainland” of the HKYCA members.

Wang Zhiyuan, the director of the World Organization, said in a telephone interview that the group “belongs to the mainland’s 610 Office, which is specifically for persecuting Falun Gong. Their actions against Falun Gong practitioners have become more and more vicious in Hong Kong. We’re calling for people to assist us in documenting evidence of their crimes.”

Once they receive the material, Wang said, they will attempt to cross-reference it with other published information.

“We will only publish the evidence of their criminal conduct,” Wang said, such as pictures of them harassing Falun Gong practitioners on the street. Practitioners claim that the Association members have done things like blowing whistles in their faces, or hit them on the knuckles with wooden banner poles. “They did those things in public,” Wang said. “But we won’t publish their personal information.” That, he said, will be given to judicial authorities.

With reporting by Lu Chen.