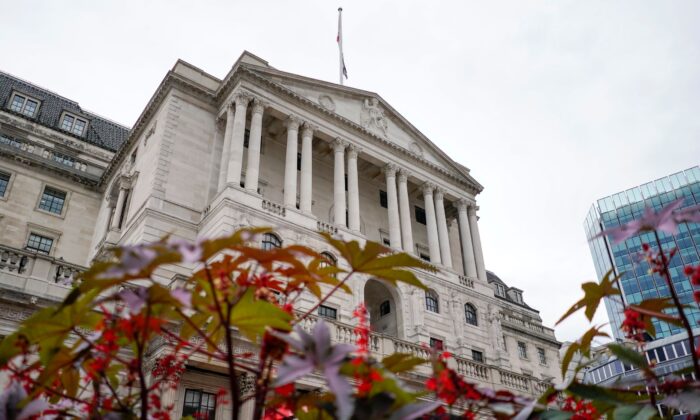 General view of the Bank of England, in the financial district known as The City, in London on Aug. 2, 2021. (Alberto Pezzali/AP Photo)

My columns have turned rather apocalyptic of late, but for a valid reason. Just this week, we got confirmation that our financial system is, again, on the brink of collapse, when the Bank of England (BOE) was forced to enact, de facto, a bailout of the pension funds of the United Kingdom.

On Sept. 28, around noon, the Bank of England stepped (back) into the gilt markets and started buying government bonds with longer maturities to stop the collapse in their value, which could have caused the financial system to become unhinged. Pension funds were faced with major margin calls, which threatened to cause a rapidly cascading run on their liabilities, as trust in their liquidity and solvency would have become questioned by a widening circle of investors and customers.

Effectively, the BOE stepped in to limit the vicious circle of margin calls faced by pension funds because of the crashing values of the gilts.

Without the BOE intervention, mass insolvencies of pension funds—and thus most likely other financial institutions—could have commenced that afternoon. It’s obvious that if one of the major financial hubs of the world, the City of London, would face a financial panic, it would spread to the rest of the world in an instant.

It looks as though the global financial system was pulled from the brink of collapse, once again, by central bankers. However, this was only a temporary fix.

It’s now clear that an outright financial collapse threatens all Western economies, because if pension funds, often considered very dull investors because of their risk-averse investing profile, face a threat to their insolvency, it can happen to any other financial institution. I consider that the banking sector will be the next in line.

Banking is a business of trust. If the trust in a bank or in the unlimited support of authorities for the bank disappears, a bank run commences.

One of the most prominent scholars of financial crises, Gary B. Gorton, defines a financial crisis in his book “Misunderstanding Financial Crises: Why We Don’t See Them Coming” as “an event where holders of short-term debt issued by financial intermediaries withdraw en masse or refuse to renew their loans.”

In common language, Gorton says that during financial crises, a large number of holders of banks’ financial liabilities, such as deposits, want to cash out. Hence the term: a bank run.

However, a bank run may not be visible, in the sense that other banks and financial institutions “run” on the liabilities of a bank. For example, during the crisis of 2007–2008, there was a run on the sale and repurchase agreements (repo) market, the market of commercial paper, and prime broker balances. Most people didn’t notice these first stages of the panic, because financial firms ran on liabilities and assets of other financial firms.

The main point is that as liabilities are withdrawn in whatever form en masse, the bank eventually runs out of assets to pledge/sell to fulfill the withdrawal requests, and the bank fails.

Going forward, the biggest risk of a systemic bank run most likely lies in Europe.

European companies and households have been and continue to be decimated by ravaging inflation, fast-rising interest rates, and spiking energy prices. They are being hit on all sides, and this will, most likely, cause many of them to fail financially.

Banks are also currently being hit by heavy declines in the value of government bonds, which they use as collateral. These may easily lead to cascading losses on banks, possibly with never-before-seen speed, size, and width.

I find it hard to imagine how these developments wouldn’t lead to a banking crisis, without massive intervention by governments and central banks, that is. And like I’ve been detailing, a banking crisis that begins in Europe won’t stay there.

How do you prepare for it then?

A characteristic feature of a banking crisis is that many banks, possibly all, will close their doors to customers and issue withdrawal limits. Another characteristic is disruptions in the financial system, most notably on card payments, as a result of which the retail payments system may seize up altogether.

While I was in Greece in the summer of 2015 with my ex-wife, the whole economy turned into a cash-based one basically over the weekend. The 2015 Greek banking crisis was caused by the European Central Bank, when it, totally irresponsibly and most likely driven by political motives, shut Greek banks from its emergency liquidity assistance.

Cash withdrawal limits were set; credit card machines “disappeared” or “broke down” in restaurants, shops, and elsewhere; and finally, cash stopped coming out from the ATMs. Capital controls were enacted, and the ability of ordinary Greeks to transfer money abroad became seriously hindered. We naturally had sufficient cash, which often happens when one travels with a crisis researcher to a country threatened by a crisis.

The main point is (was) that during banking crises, you won’t have full access to your deposits in the bank. As a result, electronic payment methods such as bank cards may become useless. In an extreme case, your deposits could be used to recapitalize ailing banks in a process called “bail-in.”

Such laws were put in place after the 2008 crisis, and they were enacted for the first time to resolve the banking crisis in Cyprus in 2013.

Technically, every sum you have in the bank above the deposit insurance threshold, a limit which also may not be “carved in stone,” is threatened by the bail-ins in a banking crisis.

We warned already in March 2017 that the global financial system, which broke during the 2008 financial crisis, has never really been healed. We noted that it and the global economy were kept standing merely by continuous central bank and government interventions and nearly unlimited provisions of credit. On Sept. 28, we got a final confirmation from the BOE that this truly is the case.

We are in deep, deep trouble.

Tuomas Malinen wishes to thank Peter Nyberg for his insightful comments and suggestions.

Tuomas Malinen
Tuomas Malinen is CEO and chief economist at GnS Economics, a Helsinki-based macroeconomic consultancy, and an associate professor of economics. He studied economic growth and economic crises for 10 years. In his newsletter (MTMalinen.Substack.com), Malinen deals with forecasting and how to prepare for the recession and approaching crisis.