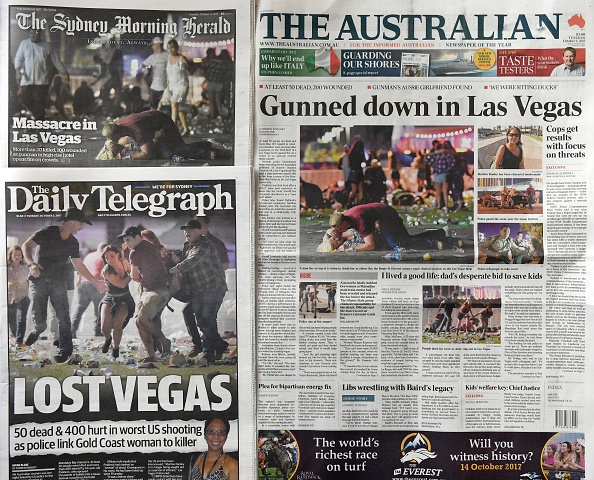 At least 59 people were killed and hundreds wounded on Oct. 2, 2017 when a gunman opened fire on a concert in Las Vegas in the deadliest mass shooting in modern US history. (William West/AFP via Getty Images)
Health Viewpoints

97.8 Percent of Mass Shootings Are Linked to This

An article written by Molly Carter, initially published on ammo.com at an unknown date1 and subsequently republished by The Libertarian Institute in May 2019,2 and psychreg.org in late January 2021,3 noted:

“According to the Federal Bureau of Investigation (FBI), a mass murder occurs when at least four people are murdered, not including the shooter … during a single incident …

Seemingly every time a mass shooting occurs … the anti-gun media and politicians have a knee-jerk response — they blame the tragedy solely on the tool used, namely firearms, and focus all of their proposed ‘solutions’ on more laws, ignoring that the murderer already broke numerous laws when they committed their atrocity.

Facts matter when addressing such an emotionally charged topic, and more gun control legislation has shown that law-abiding Americans who own guns are NOT the problem. Consider the following: The more gun control laws that are passed, the more mass murders have occurred.

Whether or not this is correlation or causation is debatable. What is not debatable is that this sick phenomenon of mass murderers targeting ‘gun-free zones,’ where they know civilian carry isn’t available to law-abiding Americans, is happening.

According to the Crime Prevention Research Center,4 97.8 percent of public shootings occur in ‘gun-free zones’ – and ‘gun-free zones’ are the epitome of the core philosophical tenet of gun control, that laws are all the defense one needs against violence …

This debate leads them away from the elephant in the room and one of the real issues behind mass shootings — mental health and prescription drugs.

Ignoring what’s going on in the heads of these psychopaths not only allows mass shootings to continue, it leads to misguided gun control laws that violate the Second Amendment and negate the rights of law-abiding U.S. citizens.

As Jeff Snyder put it in The Washington Times: ‘But to ban guns because criminals use them is to tell the innocent and law-abiding that their rights and liberties depend not on their own conduct, but on the conduct of the guilty and the lawless, and that the law will permit them to have only such rights and liberties as the lawless will allow.’”

The Elephant in the Room: Antidepressants

Thoughts, emotions and a variety of environmental factors play into the manifestation of violence, but mental illness by itself cannot account for the massive rise in mass murder — unless you include antidepressants in the equation. Yet even when mental health does enter the mass shooter discussion, the issue of antidepressants, specifically, is rarely mentioned.

The fact is, depression per se rarely results in violence. Only after antidepressants became commonplace did mass shootings take off, and many mass shooters have been shown to be on antidepressants.

Prozac, released in 1987, was the first selective serotonin reuptake inhibitor (SSRI) to be approved for depression and anxiety. Only two years earlier, direct-to-consumer advertising had been legalized. In the mid-1990s, the Food and Drug Administration loosened regulations, direct-to-consumer ads for SSRIs exploded and, with it, prescriptions for SSRIs.

In 1989, just two years after Prozac came to market, Joseph Wesbecker shot 20 of his coworkers, killing nine. He had been on Prozac for one month, and the survivors of the drug-induced attack sued Eli Lilly, the maker of Prozac. Since then, antidepressant use and mass shootings have both risen, more or less in tandem.

How can we possibly ignore the connection between rampant use of drugs known to directly cause violent behavior and the rise in mass shootings?

Another jump took place in 2012, when there were seven mass shootings. And while the annual count has gone up and down from year to year, there’s been a clear trend of an increased number of mass shootings post-2012. Over time, mass shootings have also gotten larger, with more people getting injured or killed per incident.

How can we possibly ignore the connection between rampant use of drugs known to directly cause violent behavior and the rise in mass shootings? Suicidal ideation, violence and homicidal ideation are all known side effects of these drugs. Sometimes, the drugs disrupt brain function so dramatically the perpetrator can’t even remember what they did.

For example, in 2001, a 16-year-old high schooler was prescribed Effexor, starting off at 40 milligrams and moving up to 300 mg over the course of three weeks. On the first day of taking a 300-mg dose, the boy woke up with a headache, decided to skip school and went back to bed.

Some time later, he got up, took a rifle to his high school and held 23 classmates hostage at gunpoint. He later claimed he had no recollection of anything that happened after he went back to bed that morning.9

The Risks Are Clear

The risks of psychiatric disturbances are so clear, ever since mid-October 2004, all antidepressants in the U.S. must include a black box warning that the drug can cause suicidal thoughts and behaviors, especially in those younger than 25, and that:10

“Anxiety, agitation, panic attacks, insomnia, irritability, hostility (aggressiveness), impulsivity, akathisia (psychomotor restlessness), hypomania, and mania have been reported in adult and pediatric patients being treated with antidepressants for major depressive disorder as well as for other indications, both psychiatric and nonpsychiatric.”

SSRIs can also cause emotional blunting and detachment, such that patients report “not feeling” or “not caring” about anything or anyone, as well as psychosis and hallucinations. All of these side effects can contribute to someone acting out an unthinkable violent crime.

In one review11,12 of 484 drugs in the FDA’s database, 31 were found to account for 78.8 percent of all cases of violence against others, and 11 of those drugs were antidepressants.

The researchers concluded that violence against others was a “genuine and serious adverse drug event” and that of the drugs analyzed, SSRI antidepressants and the smoking cessation medication, varenicline (Chantix), had the strongest associations. The top-five most dangerous SSRIs were:13

In her article, Carter also reviewed the clinical determinants for a diagnosis of clinical depression warranting medication. To qualify, you must experience five or more of the following symptoms, most of the day, every day, for two weeks or more, and the symptoms must be severe enough to interfere with normal everyday functioning:14

The reality is that a majority of patients who receive a depression diagnosis and subsequent prescription for an antidepressant do not, in fact, qualify. In one study,15 only 38.4 percent actually met the Diagnostic and Statistical Manual of Mental Disorders (DSM-5) criteria, and among older adults, that ratio was even lower. Only 14.3 percent of those aged 65 and older met the diagnostic criteria. According to the authors:16

“Participants who did not meet the 12-month MDE criteria reported less distress and impairment in role functioning and used fewer services. A majority of both groups, however, were prescribed and used psychiatric medications.

Conclusion: Depression overdiagnosis and overtreatment is common in community settings in the USA. There is a need for improved targeting of diagnosis and treatments of depression and other mental disorders in these settings.”

Aside from antidepressants, another factor that gets ignored is the influence of shooting simulations, i.e., violent video games. How does the military train soldiers for war? Through simulations. With the proliferation of video games involving indiscriminate violence, should we really be surprised when this “training” is then put into practice?

As reported by World Bank Blogs, young men who experience violence “often struggle to reintegrate peacefully into their communities” when hostilities end.17 While American youth typically have little experience with real-world war, simulated war games do occupy much of their time and may over time color their everyday perceptions of life. As noted by Centrical, some of the top benefits of simulations training include:18

In short, violent mass shooter games are the perfect training platform for future mass shooters. Whereas a teenager without such exposure might not be very successful at carrying out a mass shooting due to inexperience with weapons and tactics, one who has spent many hours, years even, training in simulations could have knowledge akin to that of military personnel.

Add antidepressant side effects such as emotional blunting and loss of impulse control, and you have a perfect prescription for a mass casualty event.

On top of that, we, as a nation, also demonstrate the “righteousness” of war by engaging in them without end.19 When was the last time the U.S. was not at war someplace? It’s been ongoing for decades.

Even now, the United States insists on inserting itself into the dispute between Russia and Ukraine, and diplomacy isn’t the chosen conflict resolution tool. Sending weapons to Ukraine and calling for more violence against Russians are. Sen. Lindsey Graham has even called for the assassination of Russian President Vladimir Putin. Showing just how serious such a suggestion is, the White House had to publicly disavow it, stating Graham’s comment “is not the position of the U.S. government.”20

Graham, meanwhile, does not appear to understand how his nonchalant call for murder might actually incite murder. In the wake of the Uvalde school shooting, he now wants to mobilize retired service members to enhance security at schools, and while that might be a good idea, how about also vowing never to call for the murder of political opponents? Don’t politicians understand that this could translate into some kid thinking it’s acceptable to murder THEIR perceived opponents?

As far as I can tell, mass shootings have far more to do with societal norms, dangerous medications, a lack of high-quality mental health services, and the normalization of violence through entertainment and in politics, than it does with gun laws per se.

There are likely many other factors as well, but these are clearly observable phenomena known to nurture violent behavior. I’m afraid Americans are in need of a far deeper and more introspective analysis of the problem than many are capable of at the moment. But those who can should try, and make an effort to affect much-needed change locally and in their own home.