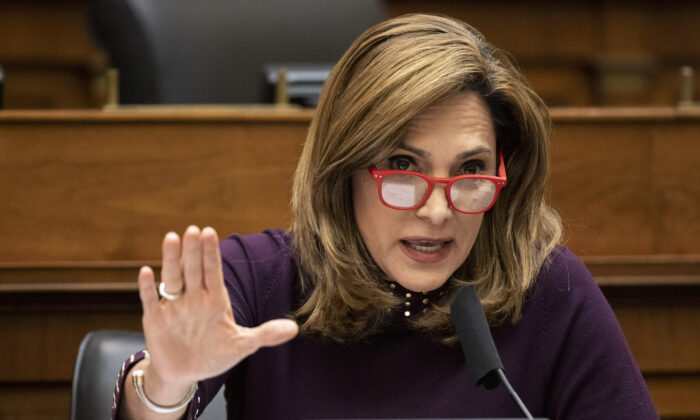 A group of seven House Republicans led by Rep. Maria Salazar (R-Fla.) have unveiled a bill that would make almost every illegal alien in the United States, as many as 22 million, eligible for green cards and a pathway to citizenship even as the country grapples with unprecedented levels of illegal immigration along its southern border.

The legislation would put some restrictions on a pathway to citizenship for the millions of illegal aliens residing in the United States, and would trade amnesty for stricter enforcement of immigration law, but would still be the most expansive amnesty bill ever passed if it were to make it to President Joe Biden’s desk.

Illegal aliens, under the so-called “Dignity Act,” (H.R. 6637) would be required to pay a one-time fine of $10,000 over 10 years and to successfully pass a criminal background check before they could move toward citizenship. They would also be barred from taking advantage of any welfare services.

In addition, the bill would attempt to tighten the enforcement of immigration law, similar to an immigration bill passed by President Ronald Reagan.

That bill, the most expansive amnesty bill ever passed in U.S. history, was the Immigration Reform and Control Act, which Reagan signed into law in 1986. Reagan’s immigration bill gave amnesty to around three million illegal immigrants.

H.R. 6637 would far exceed that total, though estimates as to the total number of illegal aliens in the country range dramatically.

On the low end of the estimates, Salazar’s bill would make 11 million illegal immigrants—four times the amount in the 1986 bill—eligible for amnesty; On the high end, it could grant amnesty to as many as 22 million, more than seven times the amount covered by the Immigration Reform and Control Act.

In addition, H.R. 6637 would grant permanent legal status to those protected under President Barack Obama’s Deferred Action for Childhood Arrivals (DACA) program, which Obama advanced with an executive order. Estimates for how many illegal immigrants were covered by the program vary, ranging from 1.5 million at the least to 3.5 million at most.

In statements to The Epoch Times, GOP cosponsors Tom Reed and Dan Newhouse defended the bill.

“This bill is a common-sense, compromise approach to illegal immigration,” Reed contended. “None of the bill’s provisions will take effect until the border has been certified secure, it will end catch and release and will provide $25 billion for border security. This is an important step forward in combating illegal immigration.”

In his statement, Newhouse also claimed that H.R. 6637 would be an improvement from the current system.

“[We] have millions of people here who have never been held accountable for crossing our borders unlawfully,” Newhouse wrote. “They are benefitting from taxpayer-funded roads, schools, and services without any consequences, which is not fair to hard-working American taxpayers. Dignity Visa holders, on the other hand, are always ineligible for welfare.

“The Dignity Act acknowledges every undocumented person committed a crime to come here, but allows them to get right with the law, come out of the shadows, and join society while paying $10,000 in restitution fees over 10 years and then (possibly) go to the back of the line after another 5 years. This is in line with the American notion that we are a nation of laws but also a nation of second chances.”

Newhouse also argued that the bill would not run the risk of spurring future illegal immigration under the hope of another amnesty in the future, and would bar Congress from passing further amnesty bills.

“The Dignity Act would actually eliminate the possibility of further blanket amnesties being issued down the line,” Newhouse said.

However, the question of whether this bill could do so is legally murky at best.

American jurisprudence, founded as it is on constitutional law, has generally held that the Constitution is the only thing that binds Congresses absolutely. Since every Congress is considered coequal with the one that preceded it and the one that will follow it, no law passed by a previous Congress can be “binding” for another, meaning that one Congress may not place limits on the actions of another through legislation.

In the 1996 case U.S. v. Winstar Corp., Supreme Court Justice David Souter referenced and reaffirmed this long-held legal principle in an Opinion of the Court.

Since H.R. 6637 would simply be the act of one Congress, it is unlikely that future judges would rule it binding on another, opening the door for further amnesty legislation.

Preston Huennekens, Government Relations Manager at the Federation for American Immigration Reform (FAIR), criticized the bill in a statement to The Epoch Times.

“[Salazar’s] bill follows closely with the spirit of President Reagan’s 1986 amnesty: it provides amnesty in exchange for some enforcement changes,” Huennekens explained.

“As we know, the 1986 amnesty led directly to a massive increase in illegal immigration from people trying to benefit from the protections. What happened to the enforcement changes? Future Congresses gutted them entirely—leading to the implementation of the entire amnesty without any of the corresponding enforcement changes that President Reagan promised.”

Huennekens predicted that the bill would inspire more illegal immigrants to cross the border in the hope of receiving future amnesty.

“This would undoubtedly spur further illegal immigration, as all amnesty legislation does,” Huennekens argued.

“The bill has some positive aspects—particularly mandatory E-Verify and Sarah and Grant’s Laws,” Huennekens argued, “but they are overwhelmed by the scale of the amnesty.”

“This is not an appropriate proposal at a time when we’ve seen more than 2 million border apprehensions in a single year,” Huennekens ruled. “Worse, the Biden administration has completely handcuffed ICE, preventing them from doing their job and leading to record-low removals.”

The United States is already facing unprecedented levels of illegal immigration along its southern border, which critics have blamed on the Biden Administration’s laissez-faire attitude toward enforcement of immigration law.

Viral images and videos have circulated on the internet showing massive numbers of immigrants crossing into the country, often without a border patrol agent in sight.

Alarming reports have arisen from Americans living in border towns, which are facing constant threat of criminal sex and drug traffickers crossing the border. Several interviewees living along the U.S.-Mexico border say that they are now unable to leave their homes without a firearm, and do not let their children out of their sight while outside.

Border patrol agents say they’re swamped, and they have been unable to apprehend a large portion of illegal entrants to the country, leaving many border residents to fend for themselves.

While it could conceivably make it through the House of Representatives, where Democrats have a majority and might be open to the bill, it has little chance of winning the support of the 10 Senate Republicans needed to meet the 60-vote threshold to start a vote in the Senate.

In an interview with Breitbart News, House GOP Leader Kevin McCarthy (R-Calif.)—who is the most likely candidate for speaker if Republicans take the House in November—said that a Republican majority will not consider any legislation that would grant amnesty to illegal aliens.

“We know first and foremost that one of our greatest strengths is the rule of law,” McCarthy said when asked whether a GOP majority would pass amnesty legislation. “So you have to have an immigration system based upon the rule of law.”

If McCarthy keeps the promise, the legislation stands little chance of making it through any future GOP-held House.