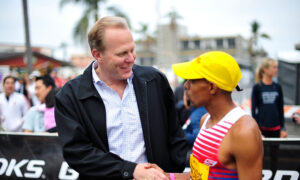 Sixty-four people were arrested and two women were rescued in an anti-human trafficking sting in California’s Riverside County, officials said.

The Riverside County Sheriff’s Department said the arrests were part of Operation Reclaim and Rebuild, which is an annual statewide operation. The sting “ran for four consecutive days before concluding on January 28, 2021,” the department said in a Feb. 2 statement.

They also made contact with two adult females who were believed to be human trafficking victims, the office stated.

“Initial investigations led the task force to believe these subjects were being forced to engage in acts of prostitution against their will. The identity of these victims will not be released pursuant to state confidentiality laws. The victims were referred to victim services for assistance as the investigation into their sex trafficking continues.”

Deputies then responded to customers who replied to the decoy ads. Officers then attempted to broker an agreement for prostitution with the respondents.

“The customers were arrested upon their arrival at a pre-determined meeting location. Concurrently, other task force members negotiated agreed upon acts of prostitution based upon other escort advertisements that were posted online in the area,” according to the statement.

“In these instances, females who responded to the undercover task force members posing as customers were directed to meet. After their arrival and an interview, if the females were determined not to be victims of human trafficking, they too were arrested.”

In early January, officials in Florida announced that more than 70 people were arrested in a human trafficking sting ahead of this month’s Super Bowl in Tampa. Officials posted fake advertisements online to lure the suspects, a similar tactic to the one used by sheriff’s deputies in Riverside County.