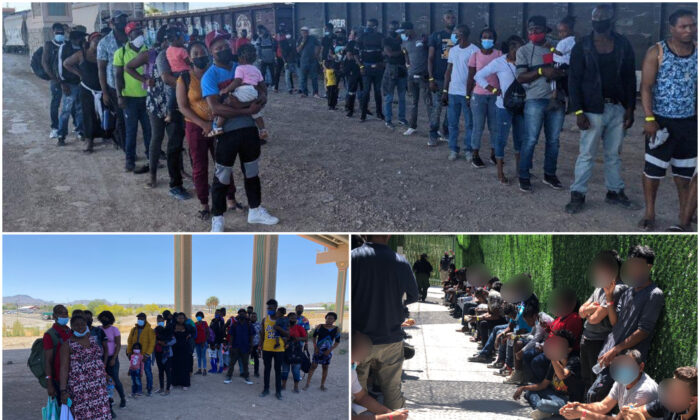 60,000 Migrants Waiting in Mexico Across Border From El Paso, Texas

In the past two weeks, more than 60,000 migrants have amassed in Ciudad Juárez, Mexico, directly across the border from El Paso, Texas, in anticipation of Title 42 being lifted from the border.

“And we can only imagine it growing even further,” Mario D’Agostino, El Paso deputy city manager, told the El Paso City Council on May 23.

About a month ago, the number of migrants in Ciudad Juárez was about 15,000, D’Agostino said. He said state and federal officials keep him updated on the numbers.

Title 42 is an emergency public health order that allows for quick expulsion of nonessential travel across U.S. borders to curb the COVID-19 pandemic. The Biden administration had planned to lift it on May 23, but a federal judge blocked that move, keeping it in place for now.

The El Paso City Council met on May 23 to discuss invoking local emergency measures—including increasing capacity for shelter, food, and transport—to deal with an anticipated influx of illegal immigrants into the city.

The call came after Border Patrol apprehended more than 1,200 illegal immigrants on May 14 and subsequently released 119 at a charter bus station because of space constraints.

On most days, Border Patrol drops between 400 and 500 illegal immigrants per day at local nongovernmental organizations (NGO), which then assist with food, lodging, and transport out of El Paso, according to Chief Jorge Rodriguez, emergency management coordinator for the city of El Paso.

“If and when Title 42 … is eliminated, we can anticipate that the numbers that we are seeing now (which is about 400 to 500 per day), conservatively speaking, will double to at least 1,000 per day,” Rodriguez said. “Almost zero percent of migrants remain in El Paso. The choice of travel—which has changed from what we saw in 2019—is primarily through the airlines.”

If the airplanes and buses are full, illegal immigrants are forced to stay an extra 24 to 48 hours in the city, which jams up city and NGO resources, D’Agostino said.

During the first four months of 2022, Border Patrol agents have apprehended more than 94,000 illegal immigrants in the El Paso area, up from 63,000 during the same period in 2021.

D’Agostino said the city’s emergency team has temporary housing options in place, but they can’t be accessed and staffed without an emergency ordinance in place.

An emergency ordinance is part of the council’s police powers to respond to local emergencies, and it suspends the bidding process requirement when procuring goods and services during an emergency.

It has to be passed unanimously and with the consent of the mayor.

On May 23, the seven city council members voted on the ordinance and it failed by one vote. Councilmember Claudia Rodriguez said she would be more inclined to give her affirmative vote if the mayor signed a local disaster declaration first.

“We were really worried that the governor would get the [disaster declaration] … and he would send the National Guard down to the border or the DPS [Texas Department of Public Safety] to the border and create a scene that was not welcome in our community,” Leeser said.

D’Agostino said the disaster declaration proposal last week was a more extreme option in anticipation of Title 42 being lifted.

Councilmembers took a second vote and passed the ordinance, which goes into effect immediately and expires in 30 days.