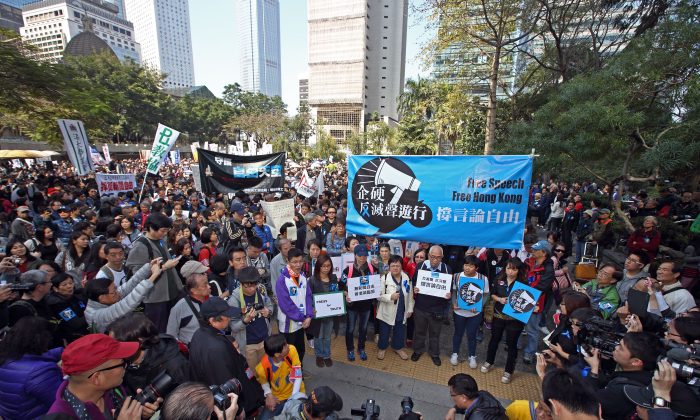 About 6000 people showed up for the march and rally outside the Chief Executive Office on Feb. 23. Well-known journalists gave speeches about the importance of Hong Kong’s freedom of press, which is increasingly violated by the Chinese Communist Party (CCP) in mainland China.

Some journalists said they have received phone calls from the HK government, consortium bosses, and mainland China’s liaison office in Hong Kong, who exert pressure on the media to report the way they want.

Former radio host Li Wei-ling, who was recently fired without warning from her job at Commercial Radio Hong Kong, said this rally was not the end, but the beginning.

“Many people have come here today, but we are only representing the first batch of awakened people,” Li said. “In reality many Hongkongers still have not woken up.”

The protesters tied blue ribbons representing freedom of speech on the fence outside the office of Chief Executive Leung Chun-ying to express their demands. Li said she hopes the blue ribbons can blossom everywhere, awakening more people to stand up for freedom.

“If we remain silent, we will be forced into silence,” said Li. “Therefore I hope everyone can join me in fighting this battle.”

Senior journalist Ching Cheong, a representative of the newly founded Independent Commentators Association, challenged the idea that Li’s dismissal and the recent replacement of the chief editor of the Ming Pao newspaper were purely commercial decisions.

“If those were regular personnel changes, why did it only affect the outspoken journalists?” Ching asked.

Li previously said during a press conference that her dismissal was due to suppression by Chief Executive Leung. Afterward many pro-CCP parties asked her to provide evidence for this.

Cheng said at Sunday’s rally, “I am the evidence. I am the witness. Last December, 70,000 people gathered at the Central Government Offices, and then we uploaded the audiotape on YouTube and over a hundred thousand people have watched it.”

“I did not record it secretly; that’s just the tape recording of a meeting of Digital Broadcasting Corporation directors. It verified clearly that the liaison office does not like Li Wei-ling. Wasn’t that the evidence?” Cheng said.

Yick Siu-ling, a victim of the 2010 Philippine hostage crisis, went onstage to express her gratitude towards Li. Yick thanked Li for reporting on the difficulties the crisis survivors faced, saying that because Li raised this awareness, the government had to follow up on the case due to pressure.

Yick believes that once the freedom of press is gone, victims will have no channel to redress injustices.

Many others also gave speeches discussing press freedom as a fundamental value of Hong Kong. Nick Kwok Hing-fai, a member of the Ming Pao Staff Concern Group, took his two-year-old daughter on the stage during the rally, saying that he came for the freedom of the next generation.

Ng Pui-ying, the former regional director of Value Partners Consulting, was asked to resign after she criticized the government for refusing to grant a TV license to Hong Kong Television Network. When Ng showed up at the rally, she won warm applause.

Ng said that many clients have told her they have received orders to withdraw advertisements from some media.

“There are pressures or influences from the management level which result in withdrawal of advertisements, or purposely not advertising in certain newspapers to suppress them. I feel that this is getting dreadful,” said Ng.

“If it continues like this, I’m very worried about how our next generation will continue to see the value of living in Hong Kong.”

The rally ended with a speech given by HKJA president Cham Yee-lan, who said she hoped everyone could continue to safeguard freedom of press as a core value of Hong Kong.

“I have been in this field for thirty years, and I have never seen the situation as bad as this,” said Cham. “I’m extremely angry this year, and this year is the first time I have ever cried for the press and for my fellow suppressed journalists.”

“Normally we have over three million copies of newspapers published daily, but the truth is that the various voices have gradually become monotone,” said Cham. “Behind the prosperous scenes, a silencing campaign is underway.”

Cham said she left her job as a newspaper assignment editor because of suppression of Tiananmen Square Massacre reports in the 1990s.

“In fact, all correspondents and middle management have to face such circumstances frequently,” she said. “Some people tolerate it by remaining silent, and some who cannot take it dejectedly quit the job.”

Up to 150 Epoch Times staff participated in the march, holding banners with messages such as “Epoch Times safeguards Hong Kong” and “Truth is the guiding light.” However, their presence was filtered out by media who reported on the rally.

The Epoch Times has always been the most-suppressed newspaper in Hong Kong. It has been at the forefront of reporting the truth about the CCP, defending Hong Kong’s core values, and upholding truth, justice and conscience as reporting principles.

Many people at the rally held Epoch Times newspapers as well as flyers with messages asking Leung to step down.

Chan, a student who attended the rally, expressed his support for the Epoch Times.

“Most Hong Kong newspapers, like Ming Pao, have been controlled by the CCP,” Chan said. “If Hongkongers continue standing on the sidelines and remain politically apathetic, then I think Hong Kong is already on the road to ruin.”

“I hope the Epoch Times can push on despite all the difficulties,” Chan added. “I don’t want to see ‘I love mainland China’ and ‘I love the CCP’ all over the media when I read the newspaper in the future.”

College student Tong said that Hong Kong has been losing its colors since it was handed over to China in 1997.

“If there is no authenticity, patriotic words alone will cause the entire society and even the minds to be taken over by the CCP. That’s why I think we have to stand up to show support,” said Tong. “It’s the right time for the Epoch Times to stand up; it’s an encouragement to us.”

The Epoch Times was not permitted to speak at the rally. All Hong Kong TV channels have been intentionally filtering out news about the persecuted spiritual practice of Falun Gong, on which the Epoch Times has reported extensively.

Many media at the rally did not want to show Epoch Times banners in their live broadcasts, so they asked field staff to cover the banners. Some young people at the scene questioned why they were trying to silence the Epoch Times at a rally with the theme “Free Speech, Free Hong Kong.”

Hong Kong people have expressed concern that the media deliberately filtered out the Epoch Times in their news footage. Although many journalists gave speeches about suppression and censorship, they all avoided mentioning the fact that they had been instructed to screen out Falun Gong and Epoch Times news.