Most are from out of state 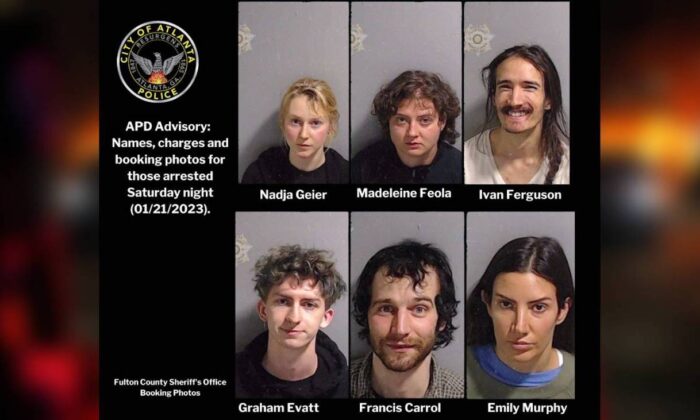 Police have charged the six suspects they arrested late on Jan. 21 at a riot in downtown Atlanta with multiple charges, including domestic terrorism.

None of the six suspects were from Atlanta, and five of them were from out of state.

The names of the suspects charged in connection with the riot, released by the Atlanta Police Department, are:

All six suspects were each charged with four misdemeanors and four felonies, which were:

The protest that took place on Jan. 21 in downtown Atlanta started peacefully but suddenly escalated to violence, with some groups of protesters-turned-rioters wearing masks and dressed in all black seen throwing rocks and lighting fireworks in front of the skyscraper that houses the Atlanta Police Foundation, shattering large glass windows. They also set at least one police car on fire, as well as smashed the windows of other businesses with rocks and hammers, and vandalized walls with anti-police graffiti.

At a press conference on Jan. 21, Atlanta Mayor Andre Dickens told reporters that some among the six arrested “were found with explosives on them … and that has led to a police officer’s car being set on fire, and other destruction has occurred.”

Atlanta Police Chief Darin Schierbaum strongly condemned the violence and said that police could tell even early in their probe into riot that “this was not the focus … just to damage the windows of three buildings and set a police car on fire [tonight],” adding, “The intent was to continue to do harm.”

Schierbaum said that protests had started peacefully marching in the city around 5 p.m., until some rioters started smashing property. Order was restored by around 7 p.m., police said. The ATF and FBI are helping with the investigation.

Georgia Gov. Brian Kemp also denounced the riot. Violence and unlawful destruction of property are not acts of protest,” he wrote on Twitter. “They are crimes that will not be tolerated in Georgia and will be prosecuted fully.”

The protest that day was in response to the death of 26-year-old Manuel Teran, of Tallahasse, Florida, who was killed by police during a confrontation on Jan. 18. Police said they had shot him in self-defense and that Teran had fired at them first and injured a state trooper. The state trooper was stable and in hospital as of Jan. 19, according to reports.

The Jan. 21 protest-turned-riot was also held in general opposition to plans to construct a $90 million training center for police and first responders in a wooded area of DeKalb County on the city’s southern outskirts.

Prior to his death, Teran was protesting at an occupation at the construction site of the training center. Teran was linked to the group Defend the Atlanta Forest (DAF), whose members have derided the planned Atlanta Public Safety Training Center as “Cop City.” The activist group are opposed to law enforcement and are also against development in the forest.

Various groups at the occupation south of Atlanta, which include DAF, appear to be left-leaning. They have called their campaign “Stop Cop City.”

Protests have been taking place against the construction site of the training center since 2022, and have in recent months become more unruly. In December 2022, the Georgia Bureau of Investigation (GBI) arrested and charged a separate five people with domestic terrorism. It said the arrests of the five “came after several people threw rocks at police cars and attacked EMTs with rocks and bottles outside local fire stations,” adding that police “found explosive devices, gasoline, and road flares” in the area.

The GBI had noted that over the past several months prior to the December 2022 arrests, “law enforcement has made several arrests for ongoing criminal activity at the site, including carjacking, various crimes against persons, destruction of property, arson, and attacks against public safety officials.”