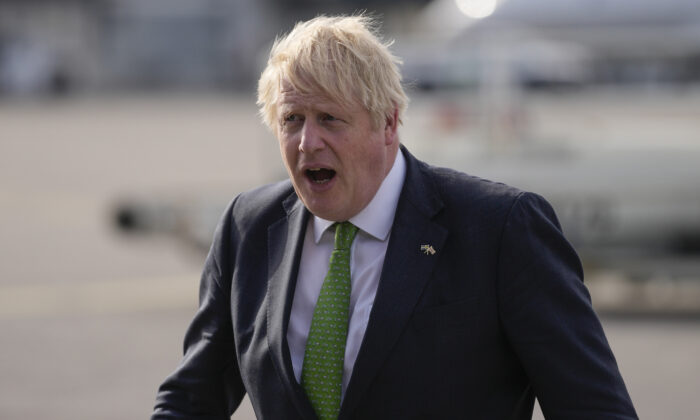 British Prime Minister Boris Johnson gets off the plane after landing in Helsinki, Finland, on May 11, 2022. (Frank Augstein/PA)
UK

Fifty people who entered the UK illegally have become the first group to be notified of the government’s intention to send them to Rwanda, Prime Minister Boris Johnson said on Friday.

They were told to produce legal representation within two weeks or be shipped to the east African country, according to the Daily Mail.

Making the revelation in a wide-ranging interview with the publication, the prime minister said the government is expecting “a lot of legal opposition” but will “dig in for the fight.”

“There’s going to be a lot of legal opposition from the types of firms that for a long time have been taking taxpayers’ money to mount these sorts of cases and to thwart the will of the people, the will of Parliament. We’re ready for that,” Johnson told the paper.

“We will dig in for the fight and you know, we will make it work. We’ve got a huge flowchart of things we have to do to deal with it, with the Leftie lawyers.”

Home Secretary Priti Patel unveiled her new deal with Rwanda last month, which will relocate some of the UK’s illegal immigrants to Rwanda so they can “resettle and rebuild their lives.”

The Home Office said it will carry out a case-by-case risk assessment when determining someone’s eligibility for relocation and take any vulnerabilities, including disabilities, sexual orientation, and gender reassignment status, into account.

The government said the deal is designed to break the business model of people smugglers, who ferry migrants across the perilous English Channel in small boats from France.

But the tactic has attracted wide criticisms from opposition parties, charities, Conservative backbenchers, and the Archbishop of Canterbury.

The British Red Cross said some asylum seekers have disappeared from their accommodations in fear of being sent to Rwanda.

But Johnson said he believes some oppose the tactic “on absolutely specious grounds.”

“They will oppose it just because they’re basically in favour of people’s right to move freely across borders everywhere. And that’s just not sustainable,” he said.

Johnson also revealed that he ditched the idea of turning small boats back in the Channel because “you risk losing lives.”

“So we had to come up with something cleverer and I think this will be the beginning of an approach that a lot of countries will start to adopt,” he said, referring to the Rwanda deal.

Asked if pushing the tactic would involve a review of the European Convention on Human Rights, Johnson said, “We’ll look at everything. Nothing is off the table.”