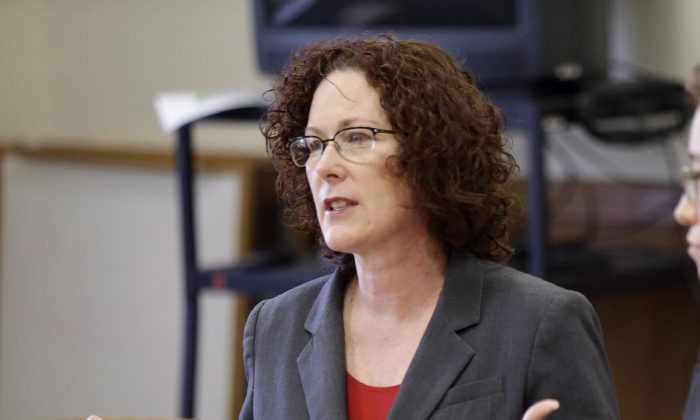 Oregon Rep. Val Hoyle, D-Eugene, speaks during a legislative forum at the Capitol in Salem, Ore. For Oregon’s upcoming primary on May 17, the Democratic race for Secretary of State is arguably tightest between Hoyle and Sen. Richard Devlin. (AP Photo/Don Ryan)
Politics

PORTLAND, Ore.—In a solidly blue state that hasn’t elected a Republican to a statewide office since 2002, the only major partisan race this year that doesn’t have political observers yawning is for Oregon secretary of state.

The position is Oregon’s second-most powerful behind the governor, and its critical role in government affairs—elections, voter registration, auditing various state agencies, corporation filings, etc.—has an impact on the daily lives of Oregonians. Yet, the state secretary and the less-than-titillating duties often skirt the limelight and public understanding.

But with voting rights and government accountability among the top election issues this year—some of the two biggest areas handled by the secretary of state—the post has drawn five prominent candidates in what’s considered the most contested statewide race.

It really is not the sexiest of jobs, but I think it’s one of the most important.
— Rep. Val Hoyle (D-Ore.)

“This is not a job you should run for if you want to be a politician out in front of attention,” said Democratic candidate Val Hoyle, who is also a state Representative and former House majority leader. “It really is not the sexiest of jobs, but I think it’s one of the most important.”

The position was thrust in the national spotlight in February 2015 when then-Secretary of State Kate Brown became governor after John Kitzhaber resigned over influence-peddling allegations involving his fiancé.

Secretary of State Jeanne Atkins, who was appointed to fill Brown’s seat, is not running for election this year.

The attention continued this year when the secretary of state’s office began rolling out Oregon’s new automatic voter registration program, the first of its kind in the nation.

The three Democrats and two Republicans vying for the job’s next four-year term all have experience as state lawmakers. They’ve collected more than $1.1 million in total donations this calendar year, according to campaign finance records with the secretary of state.

For Oregon’s upcoming primary on May 17, the Democratic race is arguably tightest between Hoyle and Sen. Richard Devlin. Hoyle feels most strongly about working with the Republican and Democratic parties to allow Oregon’s growing number of unaffiliated voters to participate in their primaries. Devlin’s years of experience writing the state’s budget is seen as an asset to the secretary’s government watchdog role, helping him score endorsements from The Oregonian/OregonLive and Pamplin Media Group.

Also seeking the office is state Labor Commissioner Brad Avakian, whose progressive campaign platform has been criticized for going beyond the scope of the secretary’s duties. However, he’s raked in more than $343,000 in donations this calendar year—the most contributions of the five candidates—and has been endorsed by several groups including the Oregon League of Conservation Voters.

On the Republican side, former gubernatorial candidate Dennis Richardson has a firm lead on his opponent, Lane County Commissioner Sid Leiken. Richardson gained recognition during his 2014 run for governor by repeatedly drawing attention to an ethics scandal that ultimately brought down Kitzhaber.

Although the November general election battle should be far more challenging for the GOP—the secretary of state’s seat has been solidly Democrat since 1986—Richardson is confident he’ll strike a nerve with voters this year.

Richardson, who’s been endorsed by The Oregonian/OregonLive and The (Bend) Bulletin, said he was thinking about retiring from politics “but I just could not allow our state to continue to be mismanaged without making one more attempt to bring about greater accountability and transparency.”