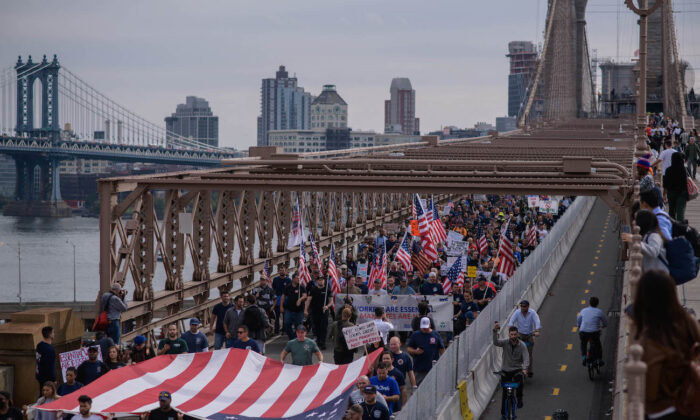 Municipal workers march across Brooklyn Bridge during a protest against the COVID-19 vaccine mandate, in New York, on Oct. 25, 2021. (Ed Jones/AFP via Getty Images)
Economy

Five percent of unvaccinated workers have left their jobs over workplace vaccine mandates, while 37 percent say they plan to do so if their employers impose such requirements, according to a new poll, which provides an early indication of labor market impacts of mandates.

The survey, carried out by the Kaiser Family Foundation on a nationwide representative sample of 1,519 adults and published on Oct. 28, showed that 1 in 4 workers said their employer has required them to get the COVID-19 vaccine—up 16 percentage points from June. And while 25 percent of all adults polled said they know someone who has left their job due to a vaccine mandate, 5 percent of unvaccinated workers—or 1 percent of all adults—have done so themselves.

Meanwhile, 60 percent of unvaccinated workers (8 percent of all adults) said they would seek an exemption if their employer imposed a COVID-19 vaccine mandate.

While the question remains hypothetical for the 75 percent of workers whose employers haven’t imposed a vaccine mandate, the findings of the survey are an early gauge of the impact of requirements on the labor market.

In September, President Joe Biden announced a vaccine mandate with a weekly testing option for businesses with 100 or more employees. It’s estimated that the mandate, which remains under review, would cover about two-thirds of the private-sector workforce.

A number of business groups have asked Biden to rescind the rule or postpone it until the end of the busy Christmas shopping season, citing concerns that the mandate might prompt workers to quit, exacerbating the labor shortage and worsening the supply chain crunch.

Neither OSHA nor the White House has provided a firm timeline on when the emergency rule on private businesses would go into effect.