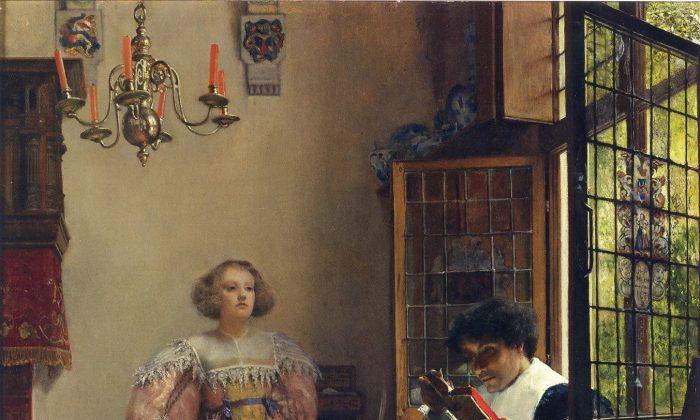 As you will read later on in this series, academy and atelier schools were first opened to women artists in the latter half of the 19th century. Because of this, there were hundreds of women who were finally able to receive formal training.

Elizabeth Jane Gardner Bouguereau (1837–1922) was an artist whose work, if ever mentioned, is often accused of too closely resembling that of her husband, the famous William Bouguereau. This was a criticism that originated during her lifetime. She became quite well known during her day and her response to this accusation was, “I know I am criticized for not more boldly asserting my individuality, but I would rather be known as the best imitator of Bouguereau than nobody!”

Clearly, Gardner Bouguereau felt that having to suffer the criticism that her work was too similar to that of the most famous and beloved artist of the time was preferable to not being discussed at all. Although her painting technique did closely resemble the skilled hand of her husband, she did in fact have a body of stunning works, many of which expressed her unique voice and gave her work a degree of separation.

Her painting titled “The Farmer’s Daughter” is a prime example. Paintings such as this have been misinterpreted by many 20th-century scholars as unrealistically idealizing peasants so that wealthy people could justify not supplying more aid to the poor. They were thought to be unrealistic for not showing hardened and dirty peasants as the work of some of the naturalists did. However, it would also be highly insulting and ignorant to say that all poor peasants were dirty and unattractive, and lived a life of drudgery. In fact, some of them modeled for this artist.

In reality, this painting is about the joy of life.

A young beauty stands among a group of barnyard chickens on a perfect, sunny day. She looks down at her hens with a mischievous glance as she teasingly lets the golden grains fall from her fingers a few at a time. The birds gather round, looking up at their loving care giver and playfully at the viewer, eagerly anticipating their feast. This painting reminds the viewer to take pleasure in the simple things, to keep life in perspective, and to enjoy one’s day to day existence.

“The Farmer’s Daughter” was first exhibited at the Paris Salon of 1887 and then again at the Exposition Universelle in 1889.

Elizabeth Southerden Thompson (1846–1933) was one of the most famous female painters of the day, whose name was known throughout the whole of England and its colonies. She was one of the first female artists to achieve fame in painting military and historical subject matter.

She traveled abroad and studied with Giuseppe Bellucci in Florence and Rome, before finally taking some instruction at the South Kensington School of Art in London. Her reputation was sealed when her painting of “Roll Call” was exhibited at the Royal Academy in 1874, and was promptly purchased by Queen Victoria. The painting still remains in the Royal Collection.

Evelyn de Morgan (1855–1919) was an important second-generation Pre-Raphaelite and the niece of John Roddam Spencer Stanhope. She is one of the few female followers of Dante Gabriel Rossetti and Edward Coley Burne-Jones, her work having closer ties to that of the latter.

De Morgan began studying at the Slade School of Fine Art in 1873, only two years after the school opened, before traveling abroad to Italy in 1875 for two years. She was married in 1887 to William de Morgan, the famous potter and designer, who shared her love of art as well as her political and spiritual beliefs.

A close friend of the de Morgan family was quoted as saying: “It is indeed unusual to find two people so gifted, so entirely in harmony in their art, who acted and reacted on each other’s genius. Their romance is one before which the pen falters.”

Eleanor Fortescue Brickdale (1871–1945) was a well-respected illustrator and painter of her day. In 1896, she created a lunette titled “Spring,” which was used in the Royal Academy Dining Room.

In 1919, Hodder & Stoughton published “Eleanor Fortescue Brickdale’s Golden Book of Famous Women,” which was a compilation of stories about some of the most famous women in history and legend as written by some of the most famous authors in history, such as William Shakespeare, Lord Tennyson, Charles Dickens, Edgar Allan Poe, and John Keats, among others. Although this book contains no introduction to explain whose inspiration it was to put the book together or who chose the content, it seems clear from the title that Brickdale must have been the mastermind behind it.

Her works are always styled in the manner of the Pre-Raphaelites, such as Dante Gabriel Rossetti or William Holman Hunt, using vibrant jewel-like colors and representing 19th-century subject matter. Take for example her allegorical painting titled “The Power of the Poet,” which illustrates the power of poetry and music over not only the mortal but also the immortal world. The poet, with his mandolin, has seduced the angel to open the door and let him in. The keys still dangle from the angel’s fingertips.

Lady Laura Theresa Alma-Tadema (1852–1909) took some drawing instruction with Ford Madox Brown, before starting her studies with Sir Lawrence Alma-Tadema, who fell immediately in love with her beautiful hair and genteel demeanor. Lady Alma-Tadema was very much influenced by the 17th-century Dutch interior painters, such as Jan van Mieris and Gabriel Metsu. Most of her paintings were staged and painted in her studio that was furnished with authentic antique Dutch furniture and wall paneling, something that pleased her husband because of his Dutch heritage. One such painting is “The Persistent Reader.”

This chef-d’oeuvre depicts a well-dressed couple indoors on a beautiful day. The woman, who has gotten herself done up and is ready, hat in hand, for a romantic stroll, is staring impatiently at her companion. One can tell by looking at this scene that the maiden has been waiting for some time and is becoming increasingly aggravated. Her mate continues to read with no immediate intention to stop for a walk, or even a glance to notice the effort that has been made to attract him.

Although these are only a few of the respected female artists of the period, there were many others, though they did not have the same authority as their male counterparts. Others, such as Elizabeth Adela Armstrong Forbes, Henrietta Rae, Lucy Kemp-Welch, Sophie Anderson, Marie Spartali Stillman, and Kate Perugini, who was the daughter of Charles Dickens, are worthy of considerable study.