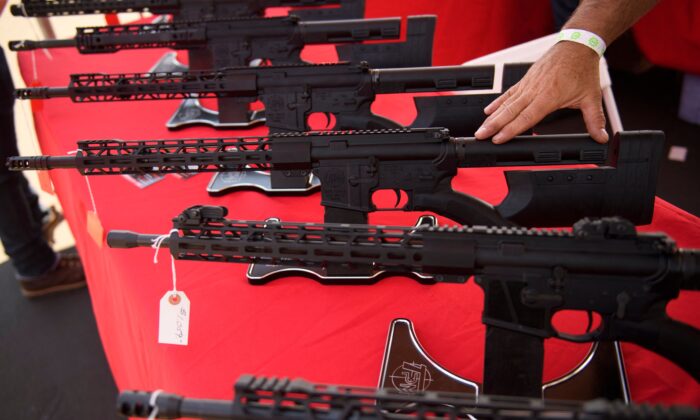 A California-legal AR-15 style rifle is displayed for sale at the Crossroads of the West Gun Show at the Orange County Fairgrounds in Costa Mesa, Calif., on June 5, 2021. (Patrick T. Fallon/AFP via Getty Images)
By Naveen Athrappully

An industry trade group has found that at least 5.4 million Americans purchased a firearm for the first time in 2021 (pdf), based on retailer surveys and background checks, with one in three buyers being women.

Out of all firearm buyers, nearly 30 percent were first-timers. This is a decrease of 10 percent from 2020 when nearly 8.4 million people bought a gun for the first time out of 21 million background checks. Correspondingly, over 40 percent of new buyers were women in 2020, according to data (pdf) collected by The National Shooting Sports Foundation (NSSF).

“We welcome these new gun owners to the greater community of law-abiding Americans who choose to own a firearm for lawful purposes, including self-defense, recreational target shooting, and hunting,” said Joe Bartozzi, NSSF president and CEO in a Jan. 25 news release.

“The surveys revealed that new gun owners are continuing to embrace their Second Amendment rights and nearly half of them are seeking out professional training. These trends show that not only is there still a strong interest in gun ownership but also that these new gun owners are interested in learning more about the safe and responsible handling, use and storage of firearms.”

More than 40 percent of buyers wanted to undergo professional training while the organization discovered that there was a marked increase in all demographics who purchased firearms compared to the previous year.

Fifty-seven percent of all gun buyers were white men, followed by white women who made up 14 percent. Black men made up 7.9 percent, while black women were 4.1 percent of buyers.

There was an increase of 58 percent among black Americans purchasing guns during 2020 when compared to pre-pandemic 2019 while it was 49 percent for Hispanics.

As more people purchase firearms, the diversity of gun owners is set to expand, leading to more active participation around political and social issues revolving around guns. The year 2021 was recorded as having the second-highest number of background checks ever for weapon sales.